S&P 500 reversed intraday just as bonds did – but broader sectoral weakness is missing. Tech didn‘t rise as yields retreated, and value held up relatively well. Let alone financials or real estate – the latter would be though facing real pressure should rates rise too much and sink the upcoming home sales figures. Yesteday‘s data were optimistic, almost as if we were approaching the house flipping mania leading to the Great Financial Crisis of 2007-9 – except that now, we‘re in everything bubble, and crucially in one where faith is being placed with the invincible Fed that‘s got the back of buy-the-dippers.

Little wonder, fresh money isn‘t needed to repair banks‘ balance sheets, but flows directly into financial markets that are still most attentive to the money spigot. The VIX looks like wanting to rise, but I don‘t think the bears would make it far. Meanwhile, the pressures are being felt in select commodities such as copper and other base metals – given the fact that the CRB Index hasn‘t rolled over to the downside in the least (no, there‘s no revival in the Fed‘s perceived readiness to nip inflation in the bud, no – and it isn‘t in the bud for quite a few quarters anymore), the waiting is likely of temporary nature. Remember the stockpile situation and the fact that U.S. manufacturing is still improving.

Such were my yesterday‘s thoughts:

(…) the stock market correction is over (saw that great Tesla move?), and our open long profits can keep growing. In precious metals, silver continues to lead gold in the countdown to the Nov taper – don‘t dare to think, PMs bears, what would unfold should the Fed not deliver. Inflation expectations wouldn‘t be as tame as they are currently – the situation on the inflation front is in my view more dire than before the Jun Fed pacification talk – which turned out empty, of course, but served the key purpose of prepping the markets for the eventual taper arrival.

Here we are, taper is baked in the cake, but inflation expectations are trending higher. And it shows in the gold to silver ratio that‘s shifting ever more to the bullish silver side – as it should in an environment of permanently elevated inflation that I had been talking about relentlessly since early spring.

The daily decline in inflation expectations added to precious metals woes, but the gold to silver ratio didn‘t spike. Similarly to the dollar that didn‘t meaningfully rise, that‘s another dog that didn‘t bark, carrying powerful implications for the real and crypto assets. 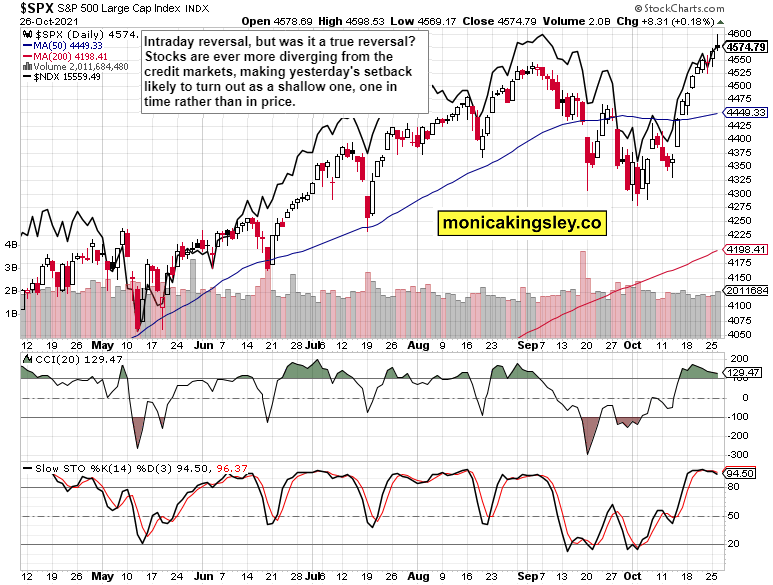 S&P 500 is in a short-term precarious position but as long as the 4,550s don‘t come into jeopardy, the bulls are safe.

We saw a serious whiff of risk-off in bonds yesterday, and the key question is whether there would be follow through or not. The low volume doesn‘t favor that at the moment.

The selling in gold and silver didn‘t attract heavy volume, making it likely temporary in nature – the miners anyway don‘t confirm such a degree of weakness. Precious metals look like misinterpreting the housing and manufacturing data. 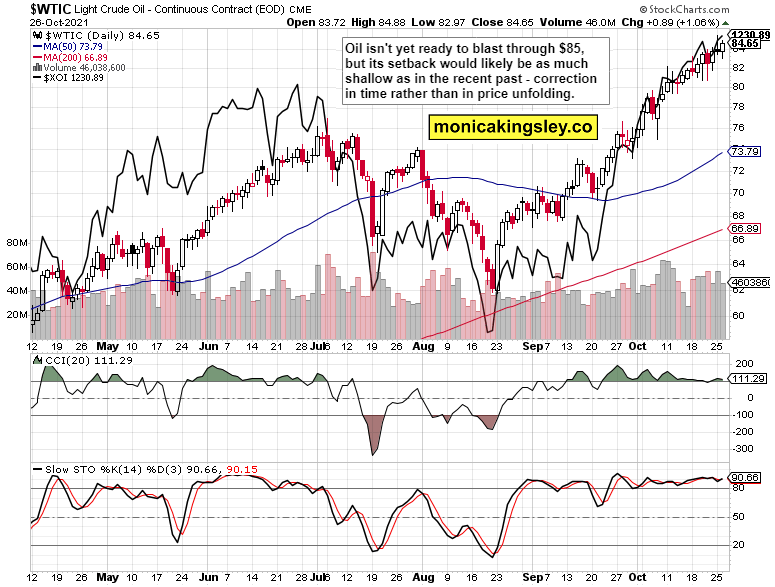 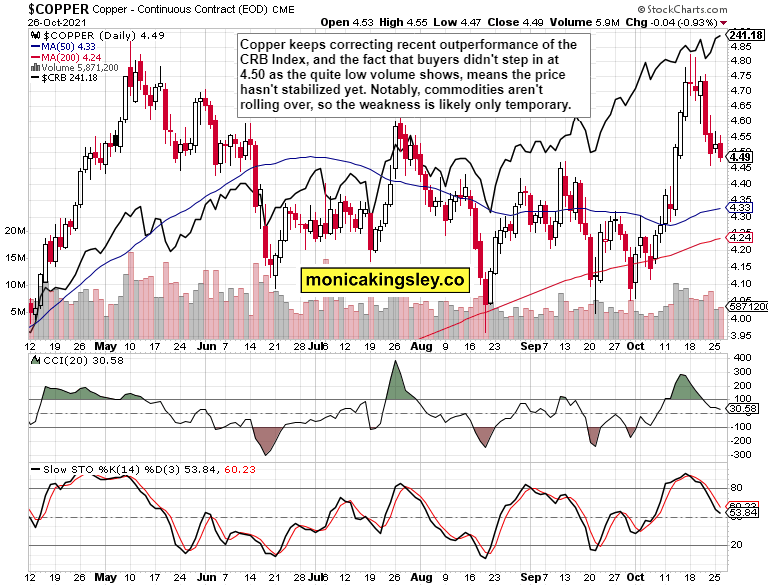 Copper couldn‘t keep modest intraday gains, and the selling inciting no buyers to step in, is a warning sign that the bulls can‘t yet sound the all clear. 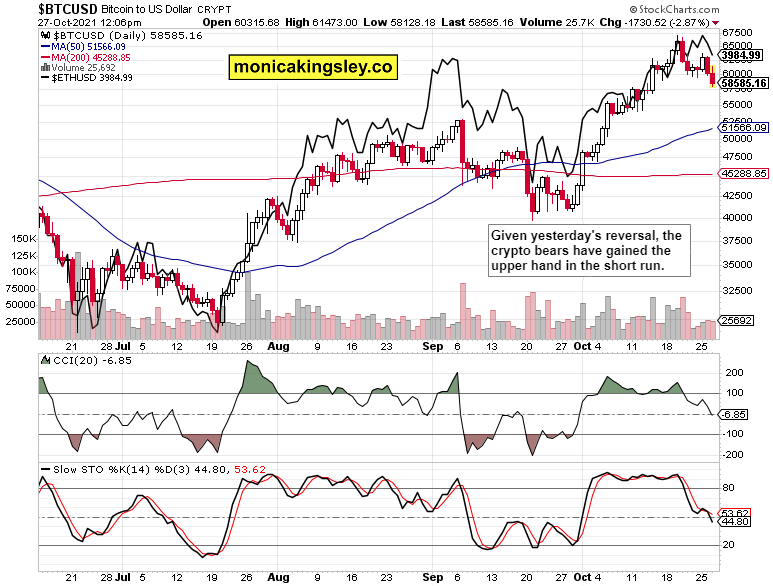 The Bitcoin and Ethereum bulls gave up solid starting position yesterday, and likewise here the buyers haven‘t stepped in yet. It‘s as if the markets were afraid of the taper or the (elusive) prospect of raising rates.

Stocks are recovering yesterday‘s hesitation, and fresh highs will likely follow, coupled with another invalidation of credit markets weakness. While the Fed practically has to taper in Nov, the dollar keeps having troubles rising, which relegates the monetary policy change to a storm in a tea cup – a little dramatic exagerration, but still it‘s nothing to sink the stock, commodity, precious metals or crypto bull runs. With real rates going ever more negative and inflation expectations on a general uptrend, these antidollar plays stand to benefit – and as regards stocks, for as long as earnings projections don‘t disappoint.