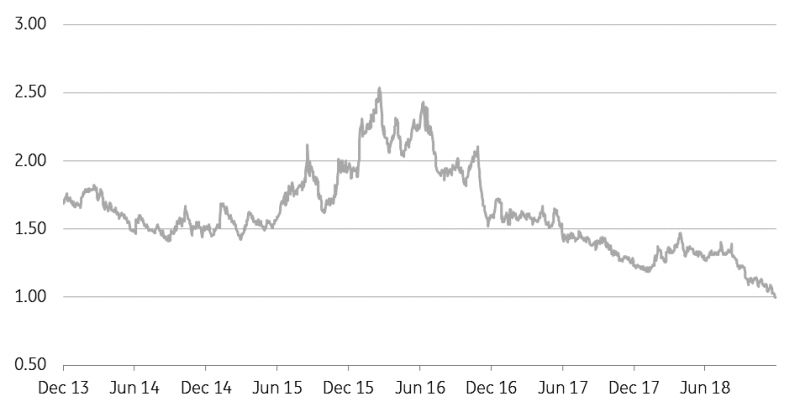 OPEC meet: OPEC members are set to gather this morning for their semi-annual meeting, and the market will be fully focused on potential production cuts from the group. The Joint Ministerial Monitoring Committee yesterday recommended that OPEC cuts output over 2019, however it is still unclear what the size of the cut may be. Today’s meeting may not offer full clarity as the OPEC+ meeting is scheduled for tomorrow, so this is when we will likely find out how much Russia is willing to cut. To add to the uncertainty, President Trump yesterday tweeted that “Hopefully OPEC will be keeping oil flows as is, not restricted.” We are of the view that OPEC+ will need to announce a cut of around 1.2MMbbls/d.

Chinese steel winter cuts: China is reported to have started tightening winter curbs in Tangshan province as air quality deteriorates. SMM reported that local authorities have asked steel mills in Tangshan to strictly implement winter curbs. Steel rebar in China has gained 4-5% over the past week, which has seen an improvement in steel mill profitability, increasing from below US$5/t in late November to US$40/t currently. While stricter cuts are supportive for steel prices, iron ore may remain under pressure as a result.

Palladium bull run: Palladium prices rallied by another 5% over the last week, taking quarter-to-date gains to 16%. Spot palladium closed at almost US$1,243/t yesterday, with the precious metal trading at a premium to gold for the first time since 2002. It is clear that the market is tight, with the forward curve in backwardation, whilst investors have pulled holdings out of ETFs, given the attractive lease rates on offer in the spot market- ETF holdings fell by 9.5kOz over the past week and 155kOz in 4Q18 so far.

Global coffee balance: The International Coffee Organization is forecasting that the 2018/19 season will see a global coffee surplus of somewhere between 500k-1.2m bags, down from a 2017/18 surplus of 1.7m bags. This is a preliminary estimate, and it's still too early to have accurate estimates for a number of crops. The decline is a result of expectations that Brazil will see a smaller crop for the 19/20 season.