Stocks versus key resistances – that' how much of last week's trading could be characterized. Yet the bullish bias has been easily noticeable as prices kept making higher highs and higher lows on a daily basis. As a cherry on Friday's trading cake, the S&P 500 predictably shook off the Hong Kong-driven rise in US-China tensions. Will stocks confirm our analysis and break above the upper border of March's gap and the 61.8% Fibonacci retracement shortly?

Judging by the case we lay out next, it's probable. 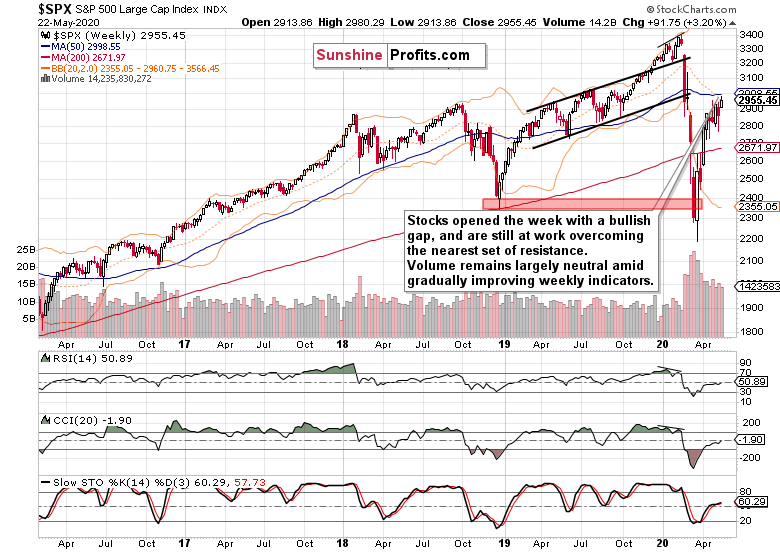 After last week's attempt to reverse to the downside, stocks continued to reject lower prices in Monday's premarket session, resulting in a bullish opening gap. And the S&P 500 hasn't really looked back since, moving two steps ahead, one step backwards throughout the week.

Knocking on the two key resistances reinforcing each other, it still managed to overcome the lower one, the 61.8% Fibonacci retracement. For how long will the upper one, the early March bearish gap stand?

While the weekly volume was largely neutral in its implications, the indicators don't stand in the way of further gains – but as they're not trending strongly either, we'll have to look for more clues on the daily chart. 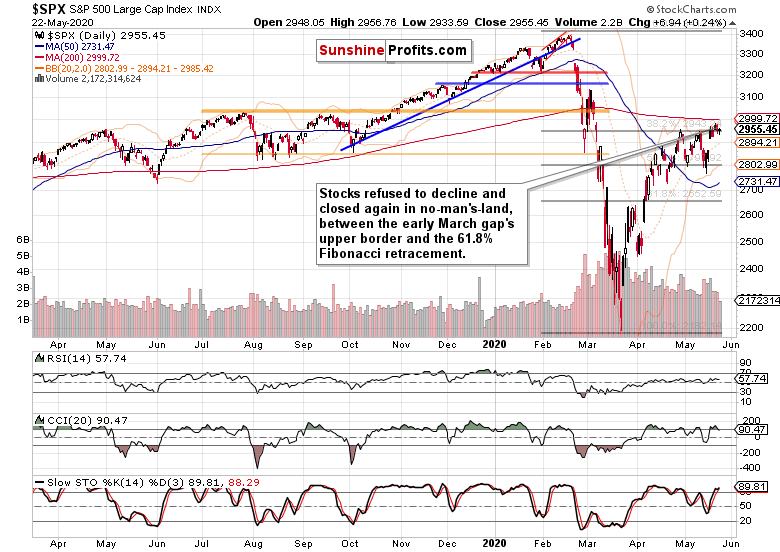 The daily chart clearly shows stocks cutting into the combined resistance posed by the early March gap and the 61.8% Fibonacci retracement. Friday's upswing means that the index finished the week back above the latter one.

This is what we've written in our Friday's Alert:

(...) this week's daily downswings were only able to achieve higher lows. It means that it's two steps forward, one step backwards for the stock bulls.

Apart from the Hong Kong jitters, there hasn't been any other catalyst or development that would prompt the markets to reassess the risks. While it's true that there needn't be a catalyst, the overnight move lower appears of limited shelf life. Flash in the pan, in other words. The chart posture remains bullish, and we see it likely that the buyers would take on the 200-day moving average (that's around 3000) before too long.

Yesterday's volume doesn't mark a reversal either, and the daily indicators keep supporting the unfolding upleg. When will more buyers jump onboard? Once they do, we expect FOMO (fear of missing out) to become dominant over the wait-and-see approach of this extended consolidation.

Yes, it proved to be a consolidation, because no matter how bearish or bullish the indications for a move either way, stocks kept frustrating both the buyers and sellers equally. As a rollover to the downside never came, the chart pressure to move higher keeps building with each passing day and week, in our opinion.

Friday's higher close happened on lower volume, and didn't affect the daily indicators greatly. Regardless, price risks continue being skewed to the upside.

Would the credit markets confirm our bullish take on stocks?

The Credit Markets' Point of View 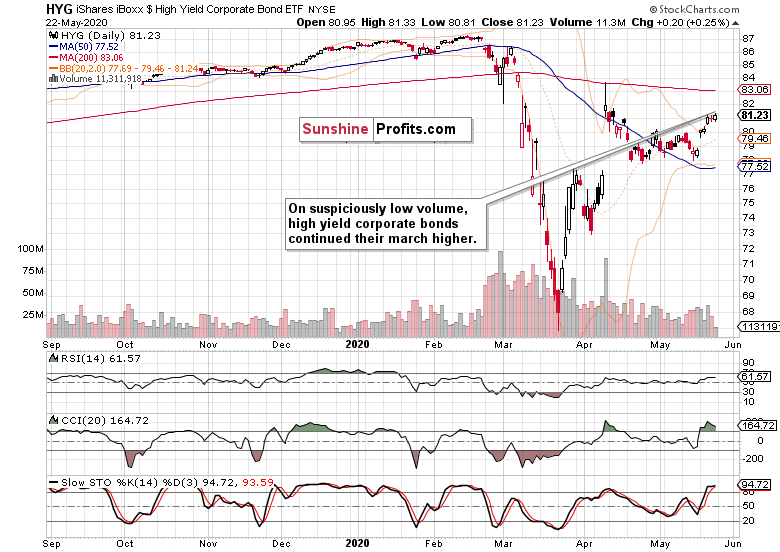 High yield corporate debt (HYG ETF) moved higher yesterday, but the daily volume is no reason to celebrate. Consolidation of recent sharp gains wouldn't come as a surprise, but this leading metric of credit market health is still primed to go higher and serve as a tailwind for stocks. 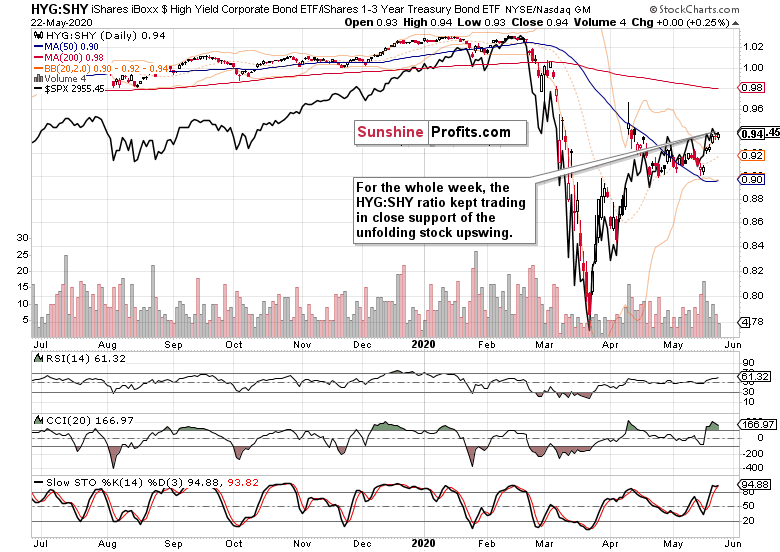 The moves in stocks and the high yield corporate bonds to short-term Treasuries ratio (HYG:SHY) continue to be moving in lockstep. Crucially for the stock bulls, this gauge of bullish spirits remains on their side. 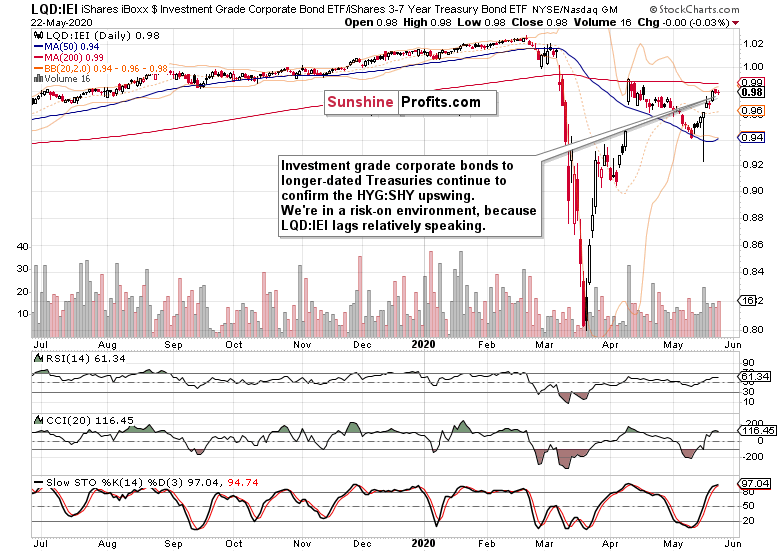 The same can be said about the ratio of investment grade corporate bonds to long-dated Treasuries (LQD:IEI). There is no divergence when compared to the previous HYG:SHY ratio. 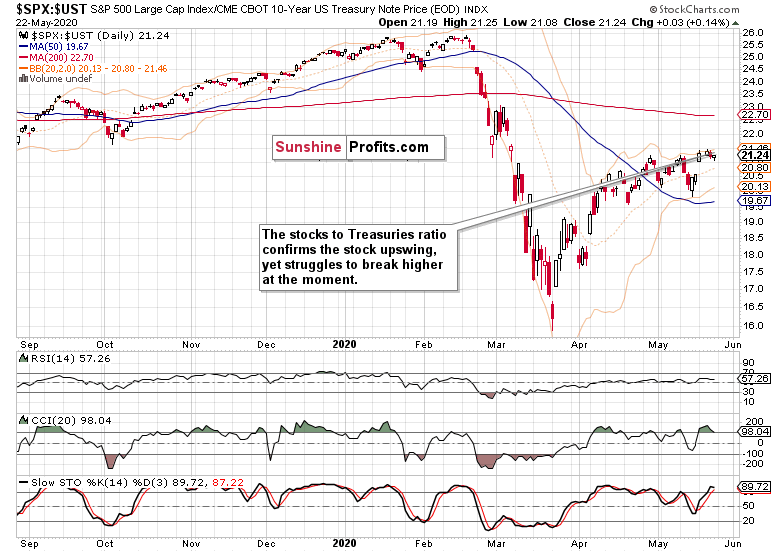 The ratio of stocks to Treasuries, the S&P 500 to 10-year Treasuries ratio (SPX:UST), paints the struggle of stocks to break higher. As it continues to trade within sight of recent highs amid still bullish indicators, it favors another S&P 500 upswing.

These were the thoughts we posted in the intraday Stock Trading Alert less than two hours before Friday's session close:

(...) While the S&P 500 didn't make much progress so far, it's the performance of high yield corporate bonds that supports more gains downs the road – and it doesn't all that much matter whether they come still today, or whether stocks catch up vigorously during Monday's premarket session / just thereafter.

The key development among the heavyweight sectors (tech, healthcare and financials) is that they're refusing to budge and decline today.

Let's examine their performance looking at the closing prices. 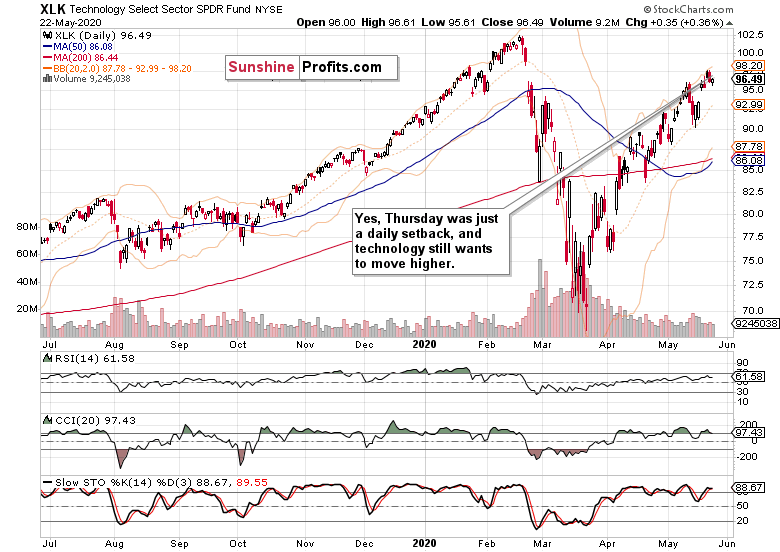 Indeed, technology (XLK ETF) refused to move lower, validating our earlier thoughts. It appears that a shallow correction is all there has been to it, and that the uptrend can go on and close the late February gap as it would challenge the February highs next. 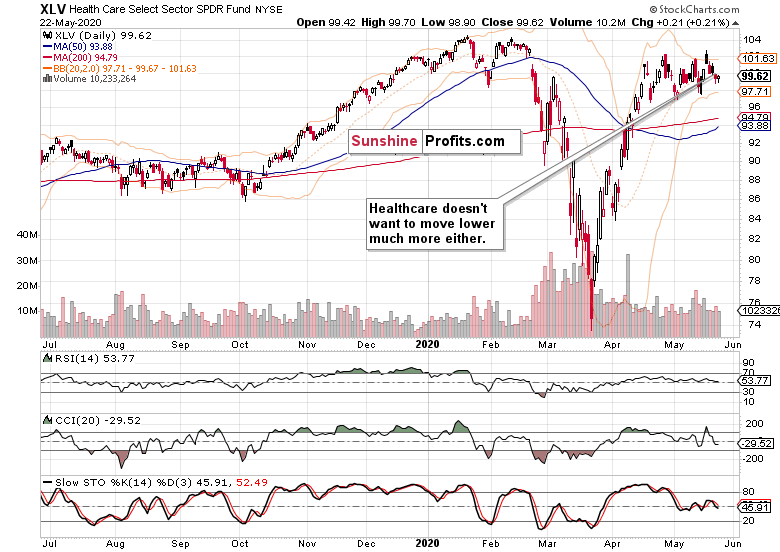 Healthcare (XLV ETF) also refused to sell off any deeper. Given the swing structure seen, we expect the sector to eventually break higher from its sideways trading range. 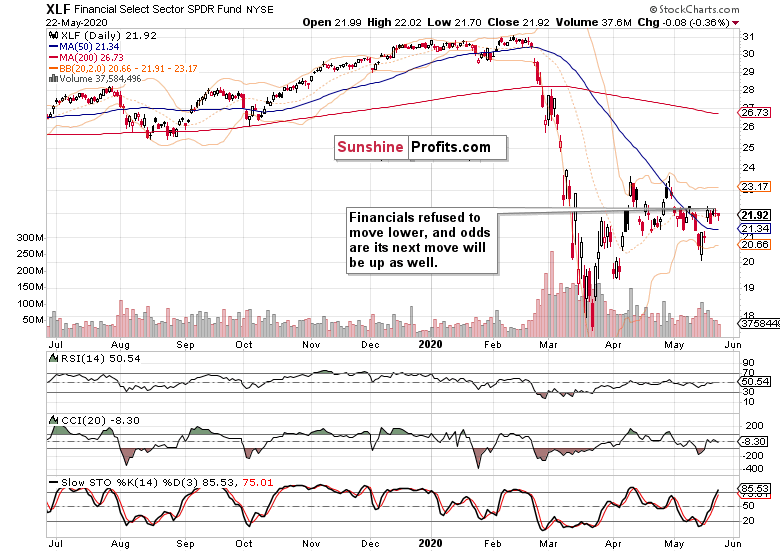 While the HYG ETF closed higher on Friday, financials (XLF ETF) merely refused to decline. Given the posture of the daily indicators and the low volume of Friday's trading, that's no cause for concern – while more sideways trading can go on in the short term, the sector remains likely to challenge its April highs and overcome them.

(...) is already trading well above its February highs. Given the degree of real economy destruction seen around, that's quite a signal this leading indicator is sending. The financials to utilities ratio (XLF:XLU) looks to have stabilized not too far from the declining resistance line connecting its mid-March and early-May intraday tops, and it's our opinion that it would go on to break higher.

The XLF:XLU ratio erased its intraday decline on Friday, and continues to trade sideways for now. While it didn't break above the declining resistance line yet, we expect it to overcome it eventually.

As for the stealth bull market trio, all three - energy (XLE ETF), materials (XLB ETF) and industrials (XLI ETF) - refused to decline any more intraday. And the sellers weren't really on the trading floor as it didn't take much buying power to rebuff the meek attempt. While that's a bullish sign in general, let's explore specifically sector-by-sector. 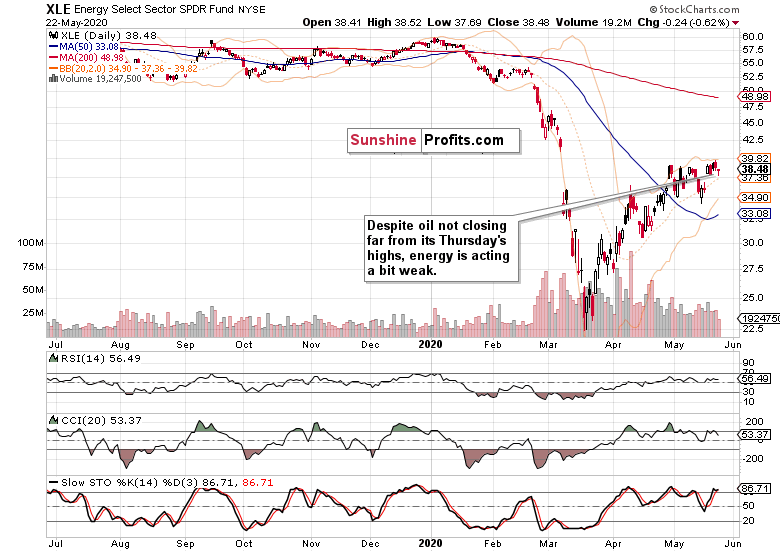 Looking at the closing prices only, energy suffered a daily setback. But it is far from rolling over to the downside, and we expect it to keep on consolidating with a bullish bias. 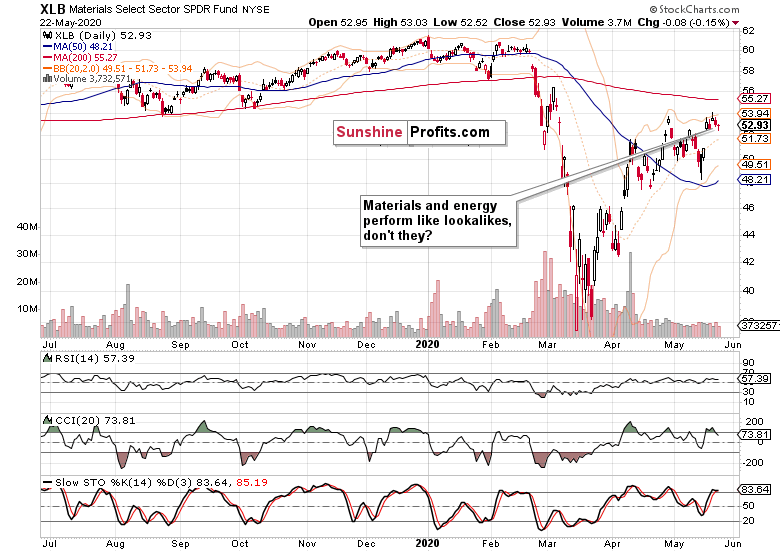 The materials' chart is in a stronger technical posture, having come closer to its all-time highs, and having closed the early March gap already. It certainly appears more gains are on the horizon – especially considering the low volume of Friday's downswing. 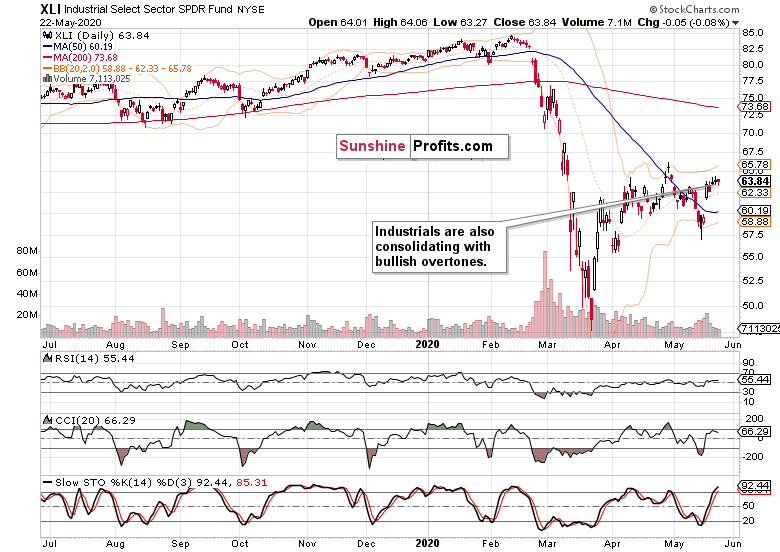 It's also among the industrials that we see base building for an eventual launch higher. Yes, that's keeps being true despite the lower low made recently in this sector, or retesting it in materials – an overshoot can come before the market moves in its true direction. And just as with the S&P 500 breaking below the 50% Fibonacci retracement not too long ago, we see that in the stealth bull trio too.

Summing up, Thursday's decline didn't land in good company of Friday as stocks refused to decline, and actually reverted back above the 61.8% Fibonacci retracement. Another attempt to close the early March gap is supported by the daily indicators, and we expect stocks to break above both formidable resistances on a lasting basis. Both the credit market and sectoral strength examination favor this conclusion. Thereafter, the bulls would target the 200-day moving average at around 3000. That's for starters, as we expect to slowly grind higher overall despite the high likelihood of sideways-to- slightly-down trading over the summer. But before that, the ball remains in the bulls' court.