The S&P 500 index was trading 4% lower yesterday before closing 0.3% higher. So was it an upward reversal or just another temporary bottom?

The broad stock market index accelerated its sell-off on Monday, as it reached the new local low of 4,222.62. The market was 596 points or 12.4% below the Jan. 4 record high of 4,818.62. Investors reacted to further Russia-Ukraine tensions. We are also waiting for series of quarterly earnings releases, tomorrow’s FOMC Statement release and Thursday’s important U.S. Advance GDP release. Overall, we had a big increase in volatility yesterday.

Late December – early January consolidation along the 4,800 level was a topping pattern and the index retraced all of its December’s record-breaking advance. This morning it is expected to open 1.6% lower and we may see more short-term volatility. Will it reach yesterday’s low again? Probably not – we’ll likely see a consolidation. 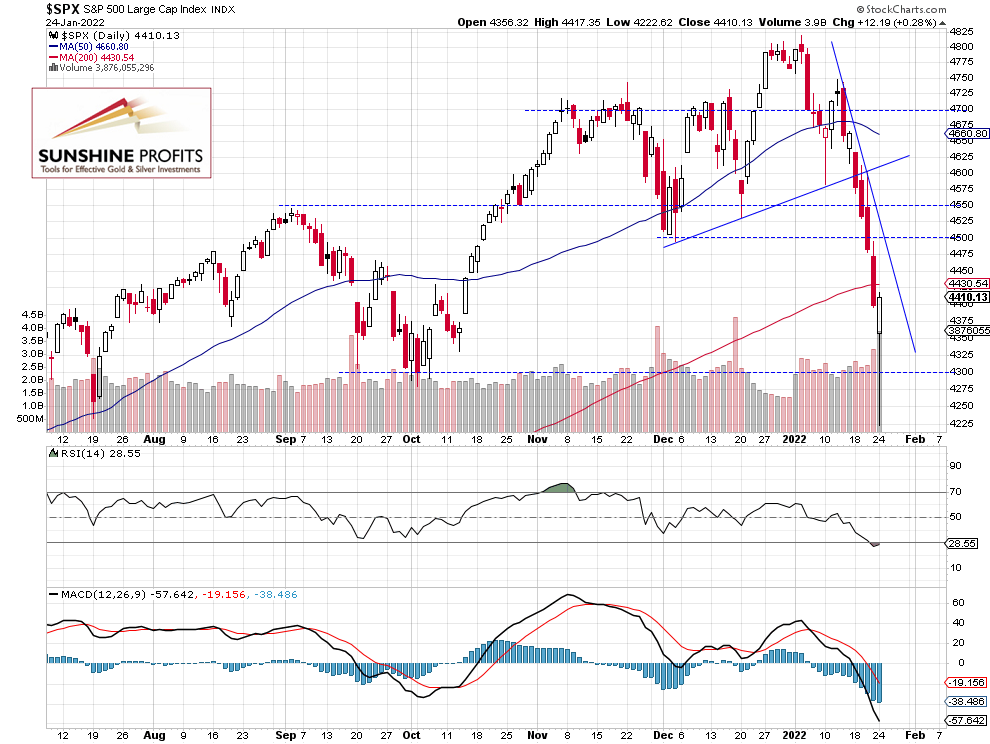 Microsoft stocks ahead of the earnings release

Microsoft (MSFT) will release its quarterly earnings today after the session’s close. It’s an important stock, as it weighs 6.0%, just after Apple’s 6.7%. So, the S&P 500 traders will be watching that release very closely. Microsoft accelerated its sell-off yesterday and it fell to the local low of $276.05. It was 21% below the Nov. 22 record high of $349.67. The stock remains below the downward trend line, but we can see some clear short-term oversold conditions. 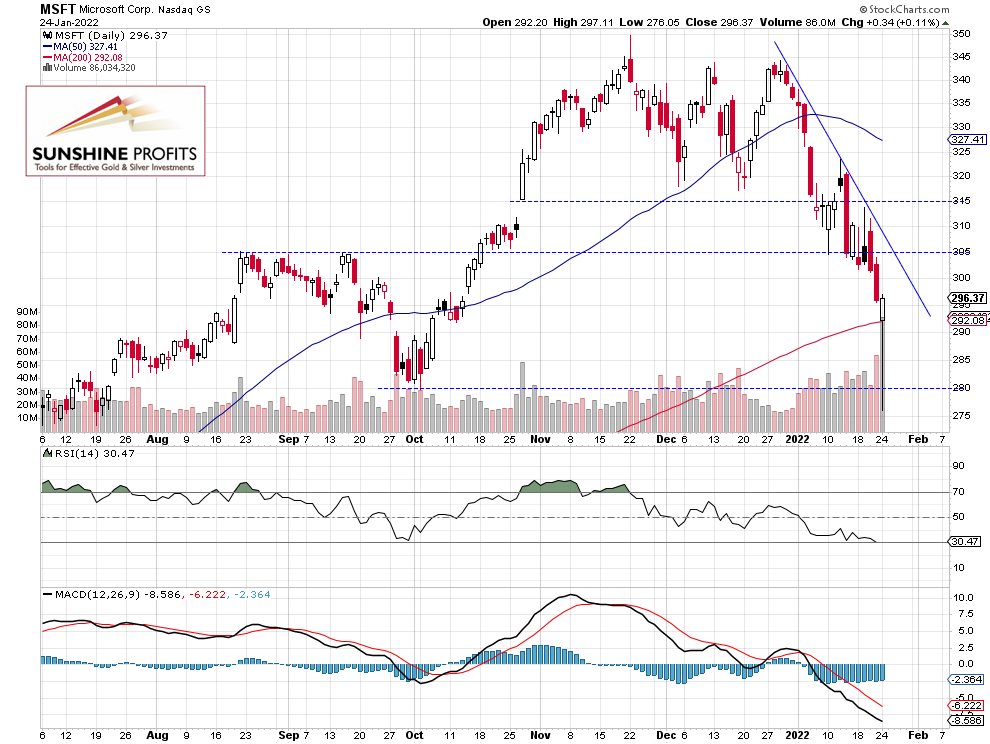 Let’s take a look at Microsoft’s monthly chart. The stock broke below its multi-year hyperbolic run marked by the thick blue curve. The chart is logarithmic, and we can see an enormous rally that took place since 2013. The breakdown may lead to a change in trend or some medium- or long-term consolidation. It looks like a multi-year bull run is over.

Futures contract got close to the 4,200 level yesterday

The S&P 500 futures contract accelerated its downtrend yesterday, as it fell close to the 4,200 level. There have been no confirmed positive signals so far, however there are some downtrend exhaustion signals. 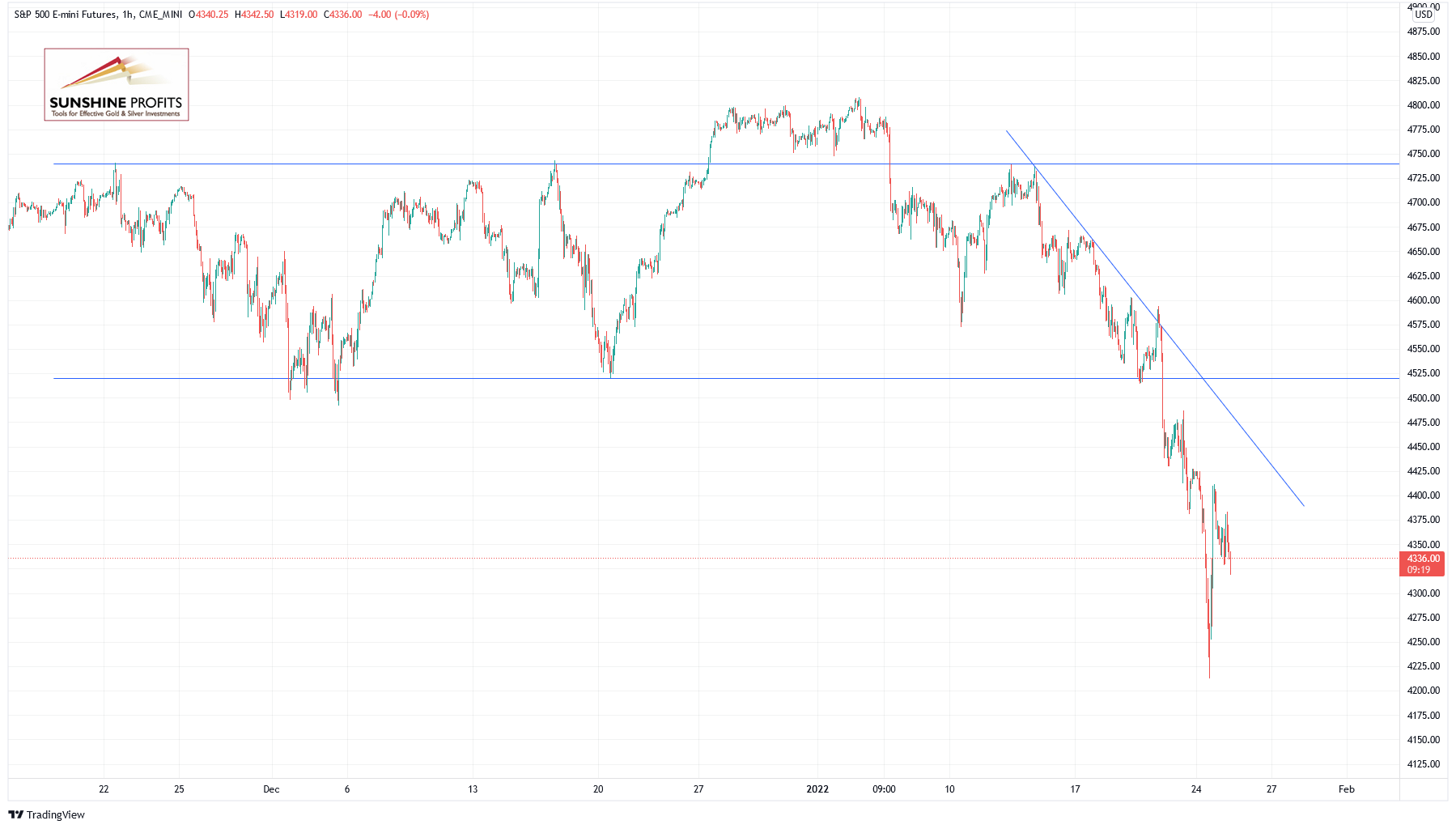 The S&P 500 index accelerated its sell-off yesterday and at some point it was 4% lower! But the market rebounded sharply following a “V” pattern reversal and it closed 0.3% higher. This morning it is expected to open 1.6% lower and we may see some further volatility.

The coming quarterly earnings releases (MSFT on Tuesday, TSLA on Wednesday and AAPL on Thursday, among others) remain a bullish factor for stocks, but there is still a lot of uncertainty concerning Russia-Ukraine tensions. Investors are also waiting for tomorrow’s Fed release and Thursday’s U.S. Advance GPD number release. If you want to be in the loop about any future market changes (with instant mail notifications!) sign up for the newsletter here.