US stocks pullback deepened on Monday with investor optimism undermined by weak data and lingering trade uncertainty. The Office of the US Trade Representative threatened to impose tariffs of up to 100% on about $2.4 billion in French imports. The S&P 500 finished 0.85% lower at 3113.87. Dow Jones industrial fell 0.96% to 27783.04. The Nasdaq slumped 1.1% to 8567.99. The dollar weakening accelerated as data showed the Institute for Supply Management’s purchasing manager’s index unexpectedly fell to 48.1 in November from 48.3 in the previous month. The live dollar index data show the ICE US Dollar index, a measure of the dollar’s strength against a basket of six rival currencies, slid 0.3% to 98.28 and is lower currently. Futures on three main US stock indices indicate higher openings today.

European stock indexes retreat broadened on Monday as president Trump tweeted he “will restore the Tariffs on all Steel & Aluminum” that Brazil and Argentine ship to US. Both the EUR/USD and GBP/USD speeded up their climb yesterday with euro reversing currently while Pound higher still. The Stoxx Europe 600 index ended 1.6% lower as Markit reported euro zone manufacturing activity shrank for the tenth month in a row in November. The DAX 30 fell 2.1% to 12964.68. France’s CAC 40 lost 2% while UK’s FTSE 100 slid 0.85% to 7285.94. 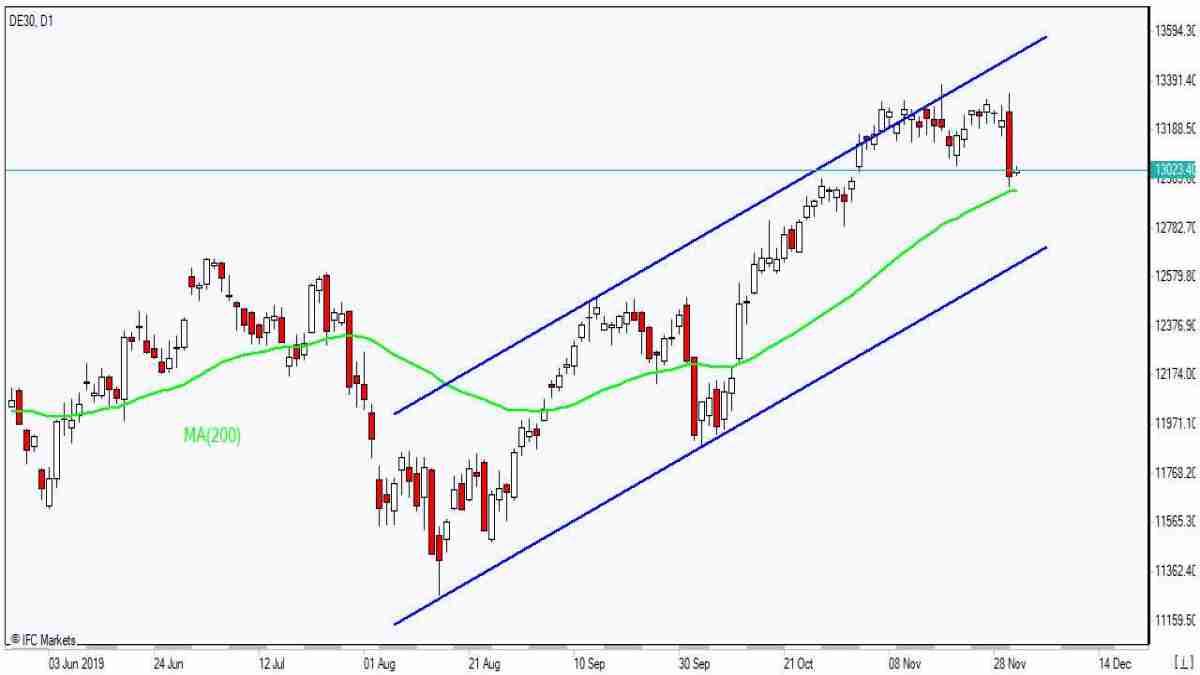 Asian stock indices are mixed today as trade concerns rose following US threat to impose tariffs on steel imports from Brazil and Argentine. Nikkei fell 0.6% to 23,379.81 despite resumed yen decline against the dollar. Markets in China are mixed as Beijing announced sanctions Monday against several US non-government organisations for supporting Hong Kong protesters: the Shanghai Composite Index is up 0.3% while Hong Kong’s Hang Seng Index is 0.3% lower. Australia’s All Ordinaries Index dropped 2.1% as Australian dollar continued climbing against the greenback following central bank’s decision to hold policy steady while the current account surplus widened in Q3.

Brent futures prices are extending gains today. Prices rose yesterday after Iraq’s oil minister remarks over the weekend that OPEC and its allies would consider deepening cuts by 400,000 barrels a day to 1.6 million barrels: January Brent crude closed 0.7% higher at $60.92 a barrel on Monday.