Technical analysis on the major US stock market indexes are all painting a negative picture. The Russell 2000 benchmark entered bear market territory today, while the Dow Jones Industrial Average edges closer to forming a death cross. The Russell 2000 is now down over 20% from the all-time high reached at the end of August. The recent weakness in US small cap companies are leading many to be concerned that we are at the end of an economical cycle. At first, many investors thought that smaller firms would be immune with the US trade war with China, but higher rates, slower growth everywhere, and over leveraged balance sheets are driving the index lower.

The National Association of Home Builders (NAHB) homebuilder sentiment for December came in at 60, both a 4-point miss and decline from the prior month. The reading was 18 points lower than last December and the weakest one since May 2015, highlighting a continuing trend of softer US housing data.

NAHB Chief Economist Robert Dietz said, “The fact that builder confidence dropped significantly in areas of the country with high home prices shows how the growing housing affordability crisis is hurting the market. He also added, “This housing slowdown is an early indicator of economic softening, and it is important that builders manage supply-side costs to keep home prices competitive for buyers at different price points.”

The market has firmly priced in a December hike and a downgrade in 2019 dot plot forecasts. Last month, stock market bulls were expecting that a dovish turn by the Fed and progress with trade wars would be enough to help stocks stabilize. We have seen the dovish pivot by Powell and some key concessions from China, but global growth fears have become the dominant theme. While the recent string of data has been softer they are mostly still in expansion or positive territory. While we could see the Fed ease up on the interest rate forecast, we could see them emphasize the tightening of the balance sheet.  Not counting a pause, it will be difficult for the Fed to deliver a result that would be very bullish for stocks and bearish for the US dollar.  The probability for the Fed to hike at the December 19th meeting fell from 72.4% on Friday to 65.9%.

The Russell 2000 Index daily chart shows the key break of the 1,410 level open the door to bear market territory. The next key support level could come from the 1,360 area, which is where we could see the formation of a bullish butterfly pattern. If valid we could see a bullish bounce towards the 1,440 level. If the pattern is invalidated, deeper support could target the 1,320 level, followed by the 1,280 level. 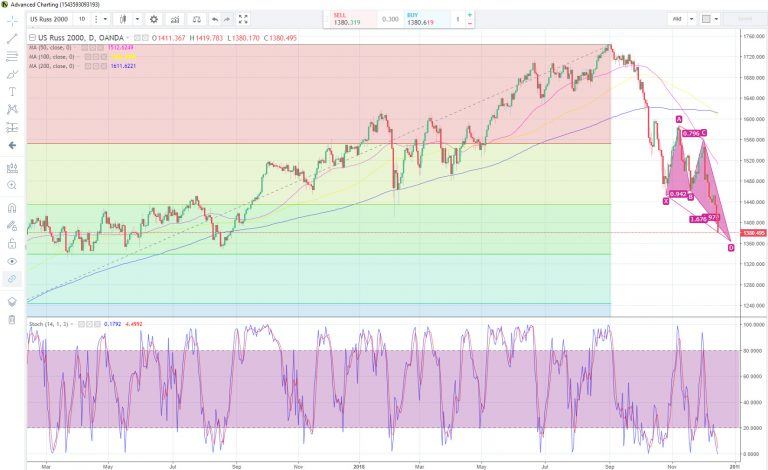