Global stocks, cryptocurrencies, and commodities bounced back on Monday as investors weighed the impacts of the Omicron variant. In the United States, futures tied to the Dow Jones and Nasdaq 100 rose by more than 143 points. Similarly, in Europe, the German DAX, CAC 40, and Stoxx 50 rose by almost 50%. Similarly, crude oil prices jumped by more than 4% while the market capitalization of all cryptocurrencies rose to more than $2.7 trillion. Analysts believe that the impact of the new variant on the global economy will be relatively muted. Besides, the world has made a strong recovery as the Delta variant has spread.

Equities are rising as the market assesses more details about the new variant since there is much we still don’t know. For example, it is still unclear about the speed of transmission of the disease. Also, scientists are not clear about how the new variant can evade transmissions. While countries like Morocco, Japan, and Israel have banned foreign travellers, major economies like the UK, EU, and the United States are still open. Most countries have nonetheless announced more measures to screen foreign arrivals.

The euro was little changed after the relatively mixed economic data from Europe. In Spain, the statistics agency showed that the headline consumer prices rose by 5.6% in October. This was a better number than the median estimate of 4.0%. Germany is also expected to publish strong inflation data later today. Meanwhile, the European Commission announced that the services and industrial sentiment rose to 18.4 and 14.1, respectively. These were better than the median estimates of 16.6 and 13.9. However, consumer confidence declined to 6.8 as concerns about inflation lingered.

The EURUSD pair rose to a high of 1.1292, which was slightly above last week’s low of 1.1190. On the four-hour chart, the pair has moved slightly above the 25-day and 15-day moving average. The Relative Strength Index (RSI) has also moved higher while the price is approaching the 23.6% retracement level. Therefore, the pair will likely keep rising as bulls target the key resistance at 1.1340. 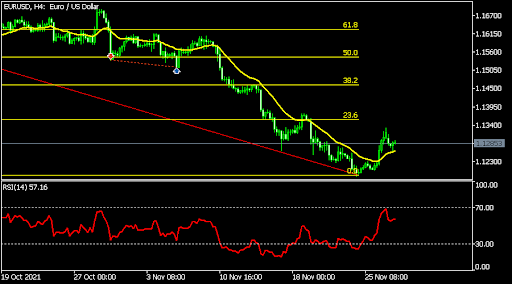 The FTSE 100 index rebounded on Monday. It rose from a low of £6,995 to a high of £7,115. On the four-hour chart, the pair moved to the 50% Fibonacci retracement level. It is also slightly below the 25-day and 50-day moving averages. The MACD has also moved below the neutral level while the price is between the lower and middle lines of the Bollinger Bands. Therefore, the index is not out of the woods yet and it could continue falling. 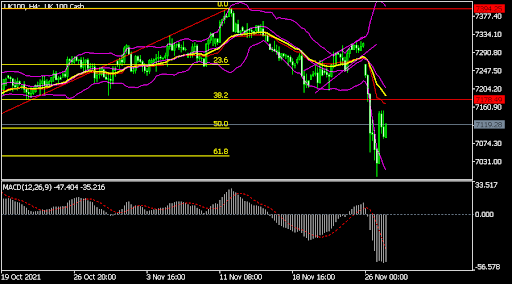 The BTCUSD pair rose to a high of 57,175. This was higher than last week’s low of 53,000. On the four-hour chart, the pair has moved above the 25-day moving average. It is also slightly below the upper side of the falling channel shown in purple. Therefore, the pair will likely resume the downward trend and retest the lower side of the channel. 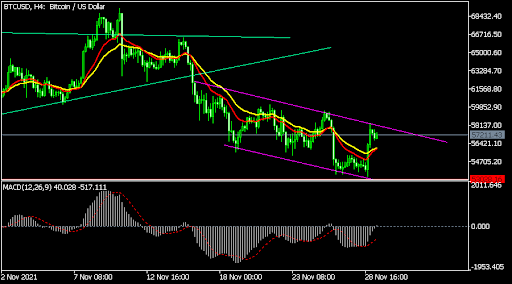