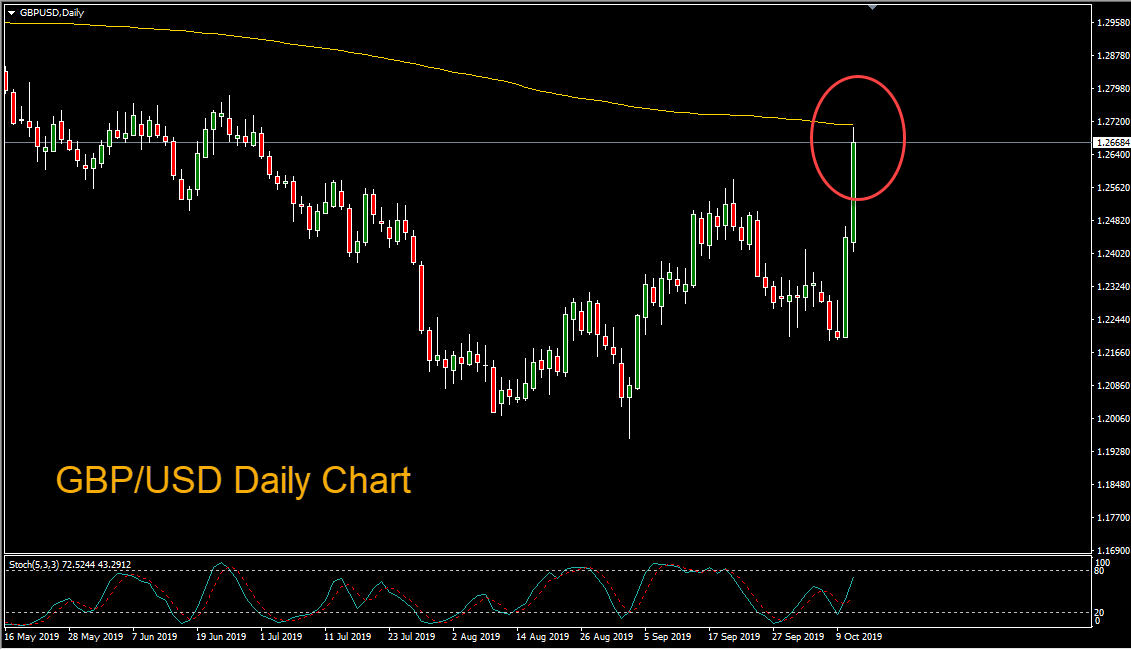 The British Pound surged on Thursday, after UK Prime Minister Boris Johnson and his Irish counterpart Leo Varadkar stated that they could see a pathway to a possible Brexit deal before the end of the month. The optimistic mood continued on Friday, with talks between UK Brexit Secretary Stephen Barclay and EU chief negotiator Michel Barnier being described as "constructive".

In the initial rally on Friday, GBP/USD soared to above 1.2680, its highest level since early July. Some analysts attributed the dramatic price move to a scramble to cover short positions. Comments from European Council President Donald Tusk while speaking in Nicosia, Cyprus triggered a brief spurt of selling. After Mr. Tusk stated that “time is practically up” for Britain to reach a Brexit deal, GBP/USD sank sharply before stabilizing.

In a tweet posted on Friday, he was cautious yet optimistic:

The UK has still not come forward with a workable, realistic proposal. But I have received promising signals from Taoiseach @LeoVaradkar that a deal is possible. Even the slightest chance must be used. A no deal #Brexit will never be the choice of the EU.

Mr. Tusk also revealed that he told UK Prime Minister Boris Johnson that unless a solution was reached by Friday October 11th, he would publicly announce that he had exhausted all opportunities of securing a deal ahead of the EU summit set to take place on October 17th and 18th.

Looking at the GBP/USD daily chart we can see that price has rallied up to the key resistance level of the 200 period simple moving average - sometimes described as the ‘line in the sand’ dividing bullish and bearish territory. Late in the day the pair made new highs, briefly reaching above 1.27.