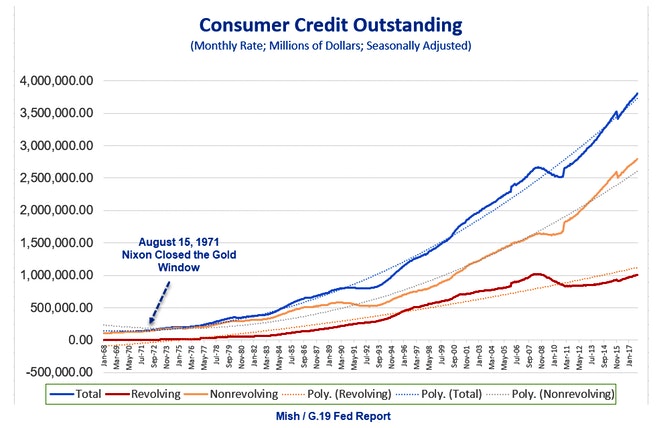 As of June 2017, Americans had a record $1 trillion in revolving debt. Nonrevolving debt is growing even faster. 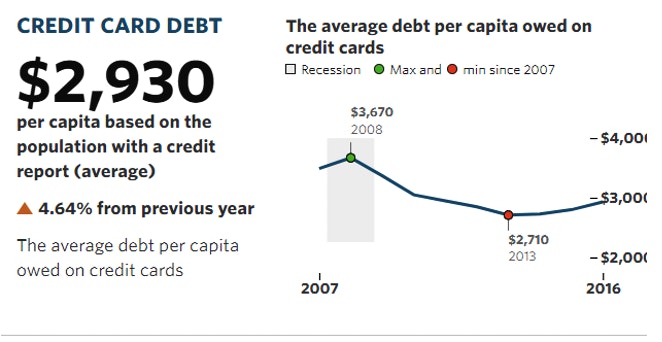 MarketWatch has "One Sure-Fire Prediction for 2018 " Americans will take on even more debt.

The rise in debt is partially because of consumers making unnecessary purchases, Palmer said; some 41% of the 2,000 consumers NerdWallet surveyed in November said they spend more than they can afford on items they don’t need.

But there are other factors at play. Expenses like food and housing are “skyrocketing” faster than income, she said. That leaves little money for other essentials and emergency funds for expenses like medical bills.

I produced the top chart from the latest Fed G.19 Report on Consumer Credit.

The trend is unmistakable, but more so for nonrevolving credit than credit card debt.

It is by no means a "sure-fire" prediction that credit will expand in 2018.

Writeoffs on consumer credit are poised to soar once a recession hits. Consumers will once again attempt to pay down credit card debt.

The availability of credit exploded after Nixon closed the gold window on August 15, 1971.

At that point, nations no longer had to spend their gold or hike interest rates to stop the flow of gold on trade deficit balances.

After Nixon closed the gold window, consumers could borrow all they wanted to buy junk from China and cars from Japan.

And with China and Japan accumulating US assets in return, there was a guaranteed buyer of US treasuries at increasingly lower interest rates.

GDP is in a funk because of debt overhang. Consumers struggle to pay down debt. Many can't because they are overleveraged to their homes.

This is all very inflationary until the bubble bursts once again. And when it does, faith in central banks will take a big hit. I expect gold will be the beneficiary.

When Does Gold Do Well?

Rather, gold performs well in specific instances, the primary one being a loss of faith that central banks have things under control. 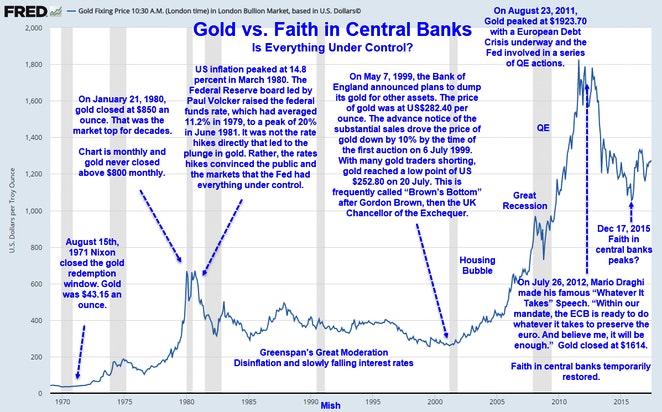 Do central banks have everything under control? The charts suggest otherwise.