Is the US headed into a recession?

Except for an unexpected negative Retail Sales number in May and real personal spending figures that are about half the inflation-boosted nominal results, there are few concrete indications that the US economy is about to start shrinking.

Markets are rife with speculation that the combination of an inflation-induced drop in consumer spending and aggressive Federal Reserve rate hikes will result in a second quarter of contraction and a recessionary first half. Annualized GDP was -1.5% in the first quarter.

Business outlook over the past months has belied market concerns, reflecting a generally positive view of the economy, though showing strains in employment.

Purchasing Managers Indexes (PMI) from S&P Global (formerly S&P Markit) are forecast to be little changed in June. Services PMI is expected to rise slightly to 53.5 from 53.4 in May. The manufacturing index is slated to drop to 56 from 57 and the composite index to climb to 57 in June from 56.

Business indexes from the Institute for Supply Management (ISM) were mixed in May but remained well above the expansion-contraction line at 50. The overall manufacturing index rose to 56.1 from 55.4 while the services measure dropped to 55.9 from 57.1.

Only in the employment indexes are there signs of difficulty. The manufacturing PMI fell to 49.6 from 50.9 in April and 56.3 in March. It was the first negative reading since September 2020. The services index rose to 50.2 from 49.5 in April, which had been the second contraction in the last four months. February’s score was 48.5.

Recent Job Openings and Labor Turnover Surveys (JOLTS) make it plain that the decline in business attitudes on employment are not founded on a weak need for help but on reluctant and missing workers. From January through April, US firms have advertised an average of 11.5 million open jobs each month. Businesses are having problems filling positions but there is an historic abundance of work. 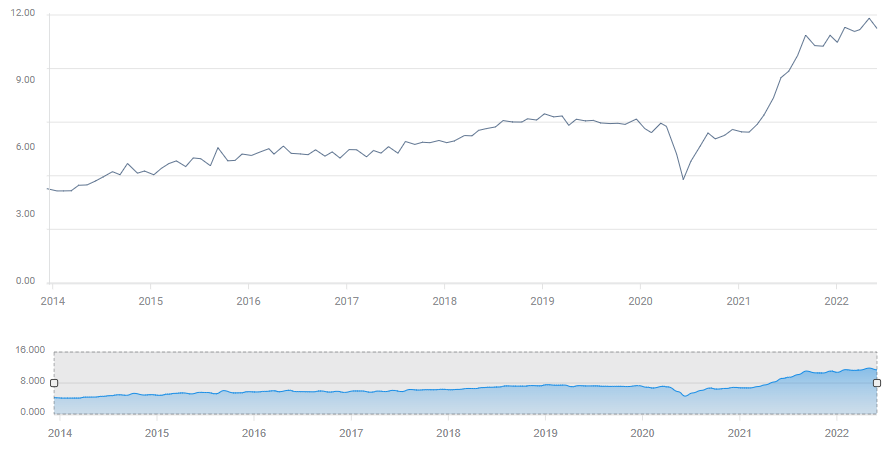 Retail Sales contracted unexpectedly in May, slipping 0.3%, a 0.2% result had been forecast. Despite the drop in May the three-month moving average is a very normal 0.6%. Retail Sales are uncorrected for price changes and with the Consumer Price Index averaging 0.8% for those three months, a portion of the sales gains are due to price increases rather than volume.

The alternative Personal Consumption Expenditures (PCE) series and its inflation corrected real version, give an idea of inflation impact. Even here, though the inflation adjusted figures of 0.43% for February, March and April are less than half the nominal number of 0.96%, they are solidly expansionary. Inflation is causing a falsely robust reading of consumer activity, it is not, however, masking a contraction in spending.

Conclusion: Waiting for the recession

The fear of recession is conjectural but not illogical. If inflation continues unabated, it could force consumers to restrain or halt discretionary spending as necessities consume more and more of the family budget. That has not happened yet, but the longer price increases outstrip wages, and they have done so for 15 months, the more likely an outright decline in consumer spending becomes.

The nominal and real disposable income series from the Bureau of Economic Analysis (BEA) give an idea of the inflationary toll on family finances.

Disposable income includes several kinds of non-wage funds, including government transfer and interest payments. Nominal disposable income averaged a 0.12% monthly gain for the five months through April. Real disposable income, corrected for inflation, was -0.42% for the same period.  Markets assume that difference cannot be made good from savings indefinitely. When enough households have been forced to reconcile spending with income, the fall in consumption could prompt a recession.

Markets are primed for negative economic news. An unexpected drop in the S&P Global PMI will fit neatly into the equity analysis that has savaged stocks this year. Treasury yields and the dollar would subside but mildly unless the main index falls below 50. Index results as expected or better will have little or no market impact as the worries about inflation and consumption have many months to run.

Perhaps the famous Samuel Becket play from which the title is derived, Waiting for Godot, is the proper guide. In it the eponymous character never arrives.