Global stocks were relatively mixed today as investors reflected on the breakthrough US infrastructure package. In Europe, the DAX and CAC 40 indices declined while the FTSE 100 rose. In the United States, the Dow Jones, Nasdaq 100, and S&P 500 indices rose by more than 0.20%. If the S&P 500 index ends the day in the green, it will be its best weekly performance since March. It will also be the 31st record close this year. This performance is mostly because of the $1 trillion infrastructure deal that was reached by Democrats and Republicans. The deal will directly benefit companies like Caterpillar and Nucor.

Technology companies like Google and Alphabet rose in the premarket even as regulatory pressures continued. In a statement today, the UK Competition and Markets Authority (CMA) announced an investigation into Amazon and Google on fake reviews. The regulator does not believe that the companies are doing enough to fight these reviews. For example, a competitor can pay people to buy a rivals products and leave negative reviews. There are other ongoing investigations on tech giants. Earlier this month, the EU and UK launched investigations on Facebook’s classified ads services. And in the US, Congress is deliberating on bills that will prevent large tech firms from stifling competition.

Cryptocurrencies declined today as the recent sell-off accelerated. Bitcoin declined to $33,754 while Ether remained below $2,000. This is the second straight week that Bitcoin has declined. The total value of cryptocurrencies tracked by CoinMarketCap has dropped by less than 1% in the past 24 hours. This price action is mostly because of regulatory concerns after several high-profile ransomware attacks. China has also launched a major crackdown on digital currencies. They have also suffered because of the relatively hawkish Federal Reserve.

The EURUSD pair was little changed on Friday. It is trading at 1.1945, which is along the lower line of the bearish flag pattern. It has also moved slightly above the 61.8% Fibonacci retracement level and is along the 28-day exponential moving averages. The Average Directional Index (ADX) has also retreated. Therefore, the pair will likely break out lower, with the next target being last week’s low at 1.1846. 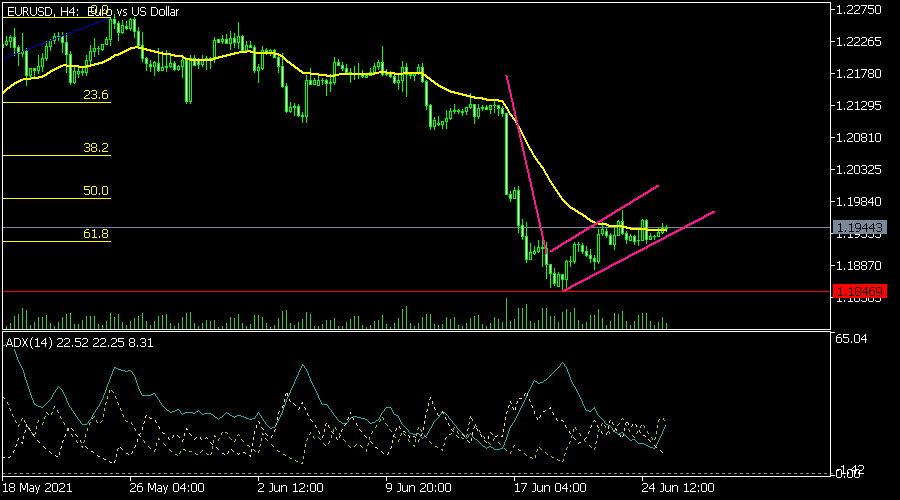 The ETHUSD pair downward momentum continued today as it fell to 1,865. The price is below the tip of the pink bearish pennant pattern. It has also dropped below the 25-day moving average while the Relative Strength Index has dropped to 34. The pair is also approaching the important support at 1,717. Therefore, any break below this support will send a signal that bears have prevailed and open the possibility of the pair falling to 1,500.

The EURGBP pair rose to 0.8590 today. On the four-hour chart, the pair has formed a descending channel that is shown in pink. It is currently approaching the upper side of this channel. Also, the price has moved above the 25-day moving average while the Relative Strength Index has risen to 60. Therefore, the pair will likely remain in the current range in the American session.