S&P 500 plunged to open the week – how fitting given the unfinished job in tech and Treasuries. The rising yields are all about betting on a really, really hawkish Fed – just how far are the calls for not 25, but 50bp hike this Mar? Inflation is still resilient (of course) but all it takes is some more hawkish statements that wouldn‘t venture out of the latest narrative line.

Anyway, the markets aren‘t drinking the kool-aid – the yield curve continues flattening, which means the bets on Fed‘s misstep are on. True, the tightening moves have been quite finely telegraphed, but the markets didn‘t buy it, and were focused on the Santa Claus (liquidity-facilitated) rally instead – therefore, my Dec 20 warning is on. The clock to adding zero fresh liquidity, and potentially even not rolling over maturing securities (as early as Mar?) is ticking.

And the run to commodities goes on, with $85 crude oil not even needing fresh conflict in Eastern Europe – the demand almost at pre-corona levels leaving supply and stockpiles in the dust, is fit for the job. So, let‘s keep enjoying the SPX short and oil long profits, while having an eye on how far can the bulls move the 500-strong index today. That would require quite a move in bonds and tech… 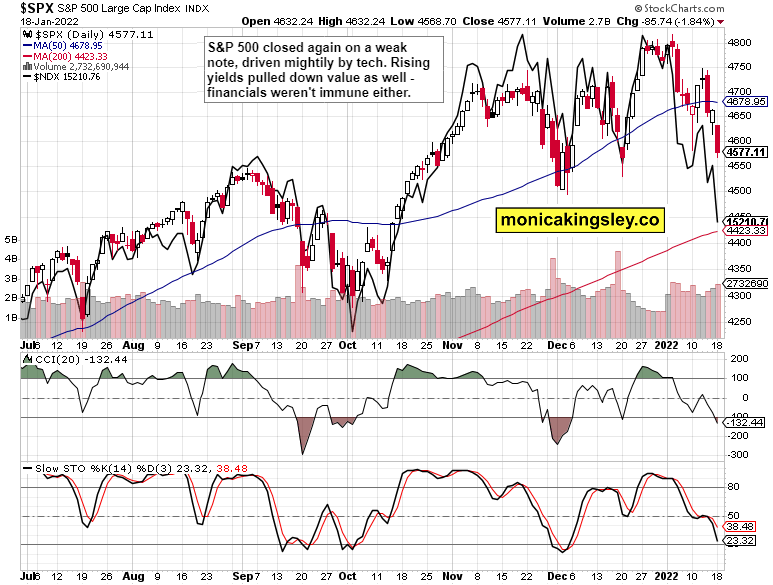 The rise in volume doesn‘t qualify as accumulation just yet, and that detracts a little from the developing rebound. I still think we‘re likely to go down some more, but will happily reenter at higher levels as I was just taken out of the current position.

HYG had a weak session – there is no outperformance of quality debt instruments to speak of. Crucially, cyclicals were unfazed with higher yields, which may be a sign of temporary exhaustion to the downside approaching. Bear markets simply like to take a breather before the sellers return.

Gold and silver are sending a mixed message – but it isn‘t one of worry. GDX actually printed a nice upper knot yesterday while silver rose in spite of the USD upswing. Classic signs of a top and impending slide? Formally, but I don‘t think that‘s applicable given the metals performance over the past few months. 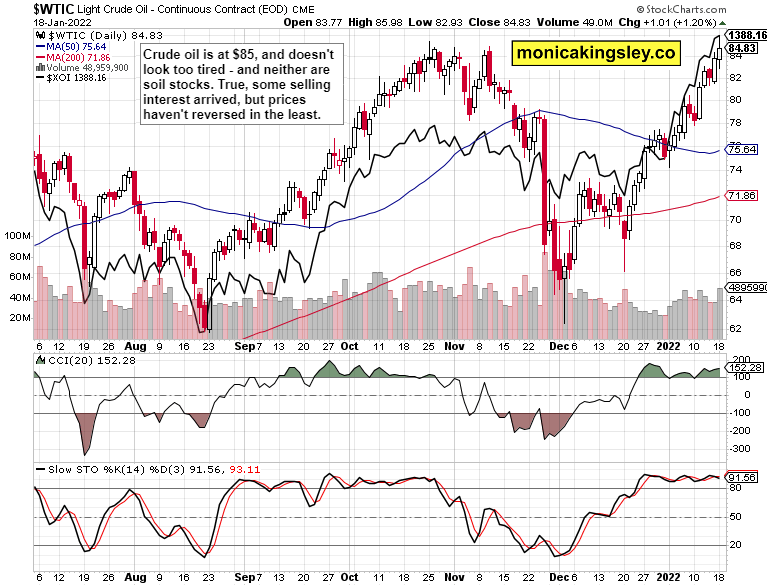 Crude oil is still on the path of least resistance – higher. No true reversal to be seen yet, but some sideways to up consolidation in the absence of geopolitic conflagration, is very much possible. 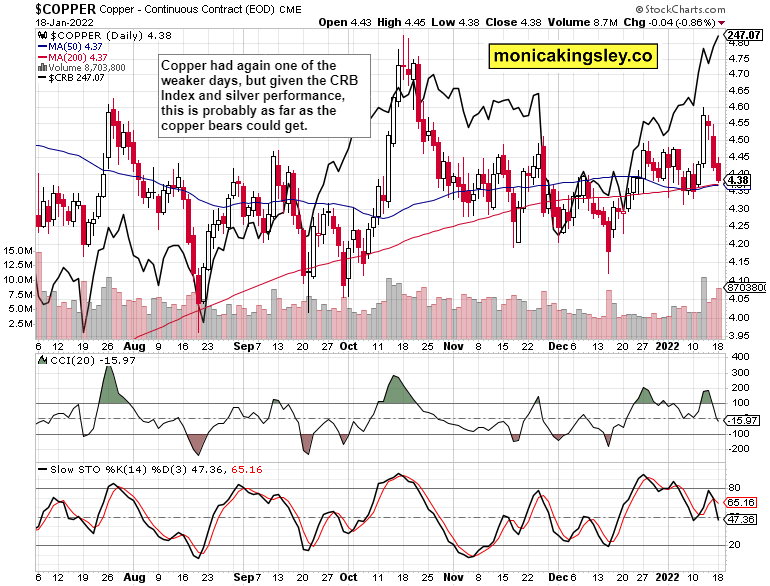 Copper missed another opportunity to catch up – postponed a little, it will still happen. It had been the red metal doing better than silver over quite a few 2020-2021 months, and silver now looks out of the blue to have woken up a little. More confirmation from the red metal would be helpful here. 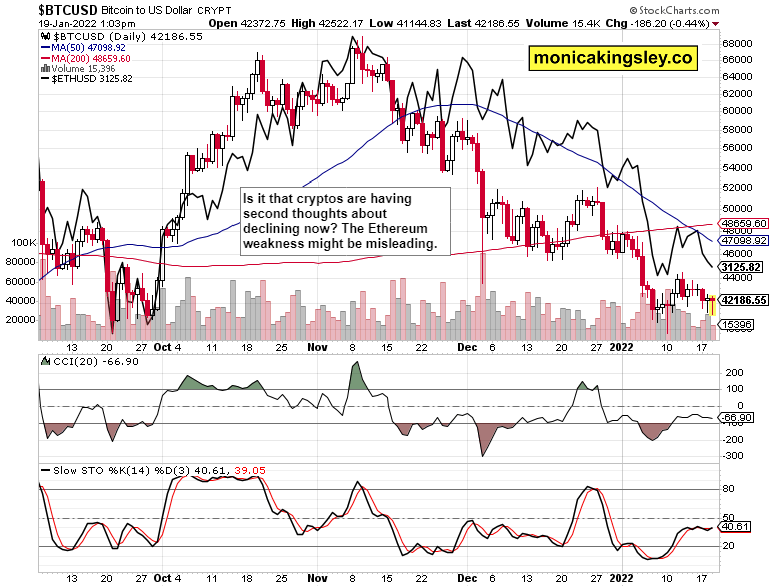 Bitcoin and Ethereum may be setting up a little breather but unless the 2022 highs are taken out, the most probable path next, is to the downside. This direction still makes most sense.

S&P 500 is staging an upswing, which could still turn into a dead cat bounce. That‘s still my leading scenario, but I would prefer to see the constellation when the bulls get tired again, first. Remember that the sharpest rallies happen in bear markets – and while we aren‘t in an S&P 500 bear market yet, this correction is likely to turn out on the really memorable side of the spectrum since the bull market was born on Mar 23, 2020. It‘s all about developing appreciation for the Fed‘s tools practical limits, still expansive fiscal policy and absolutely unyielding inflation (in that it‘s beyond the tastefully palatable limits). The unfolding correction for us to go through still would set the stage for a good 2H advance. As written in Monday‘s extensive analysis, the early phase of the Fed tightening cycle belongs to the bears, and it would continue to be commodities and precious metals to weather the storms best. Long live the inflation trades.