It is remarkable how the stock markets have managed to hold their own rather well considering everything that’s happened, from the escalation of US-China trade war to renewed fears over global growth and not to mention ongoing concerns over Brexit, Italy and valuations. When the market is able to absorb so much negativity, it is usually a sign of strength. So I wouldn’t bet against the S&P hitting another record high in the coming days, even if we think the markets are overvalued at current levels.

In fact, US index futures are pointing to a higher open on Wall Street today, tracking a stronger European session so far. The recovery started yesterday after Bloomberg reported that the US President Donald Trump is planning to delay imposing tariffs on EU auto imports by 6 months. The news lifted German stocks most notably, and the DAX index was again leading the pack this morning, with technical momentum adding to the buying pressure after it formed a bullish outside day within its bullish channel.

Earlier, index futures had slipped in reaction to news the US government wanted to crack down on China’s Huawei operating in the country on national security concerns, further escalating the trade war between the US and China. Beijing has not responded but is clearly against this and denies the company or its products would be used to gather sensitive intelligence – the reason why the US has banned the company. However, the losses were only limited as sentiment was already boosted the day before from news of Trump delaying auto tariffs.

With the S&P 500 trying to breakout from its bull flag pattern after key support in the 2814/15 region held, the path of least resistance continues to be to the upside for US markets. The next bullish targets are as follows:

As things stand therefore, more upside appears likely than downside. However, the technical outlook would flip back to bearish in the event of a false breakout from the bull flag pattern. A potential break below the aforementioned support around 2814/15, if seen, would be another bearish development. 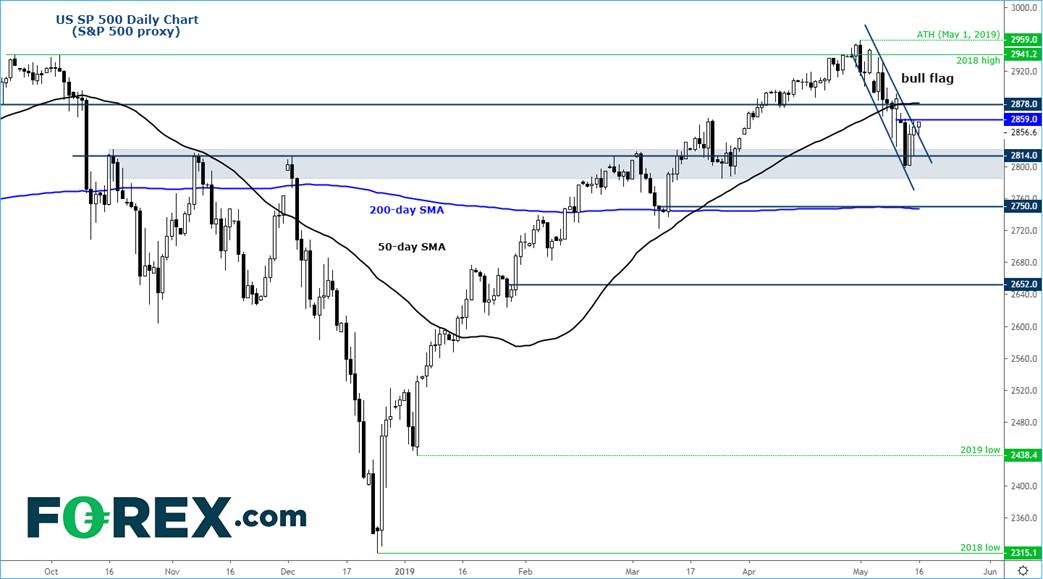