Retail sales were reasonably solid in December, but downward revisions to previous months mean that year-over-year growth in holiday spending was not quite as strong as expected.

Data released this morning showed that overall U.S. retail sales rose 0.3% on a seasonally adjusted basis in December relative to the previous month, matching the consensus forecast. Sales in November, which were originally reported to have risen 0.2%, were revised higher to 0.3%. On a year-overyear basis, overall retail spending was up 5.8% in December, which was a 16-month high (top chart). 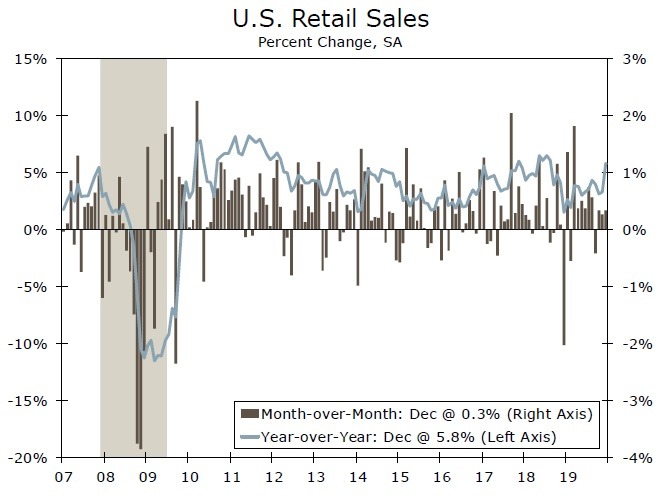 The increase in overall retail spending in December was flattered by the 2.8% rise in sales at gasoline stations. Gas prices trended higher between last summer and the end of 2019, and the increase in those prices helped to push up gasoline station sales in each of the last three months of the year. On the other hand, spending on motor vehicles and parts tumbled 1.3% in December. Stripping out the volatile components of gas and autos, retail sales rose at a healthy clip of 0.5% due to broad-based strength in most other components of spending.

In that regard, so-called "control group" sales were also up 0.5% in December, although November's original print of a 0.1% gain was revised down to a decline of 0.1%. "Control group" sales, which exclude purchases of gasoline, autos, food services and building materials, is a good proxy for personal spending on goods in the GDP accounts. Today's data give us some comfort that our projection of a 2.1% annualized rate of increase in real consumer spending in Q4-2019 is reasonably on the mark. Although this would represent a step down from the 3.2% rate that was registered in Q3, U.S. consumer spending is hardly falling apart. We look for continued solid growth in real consumer expenditures, on the order of 2% or so, in coming quarters.

If there is any disappointment in the today's data release it is that "holiday sales" look to have been weaker than we were anticipating. (We define "holiday sales" as total retail spending less sales at auto dealers, gasoline stations and restaurants.) Indeed, media reports over the past few days indicate that some retailers were disappointed by the holiday shopping season. In the last two months of the year, our measure of "holiday sales" was up 4.1% on a year-ago basis (middle chart). Although weaker than we expected, this growth rate was a marked improvement over the 2.6% growth rate that was registered in 2018. Interestingly, non-store retailers, which includes online sales, did very well in 2019. On a year-over-year basis, sales of non-store retailers were up more than 24% (non-seasonally adjusted) in December. As shown in the bottom chart, non-store retailers now account for the largest share of holiday spending. 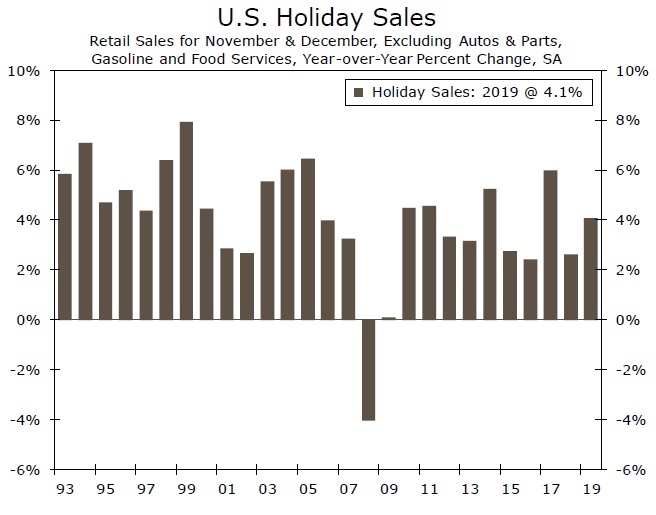 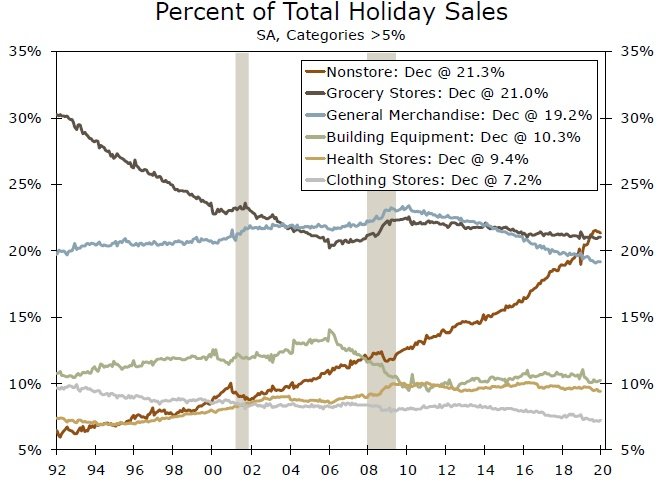