Inflation softened further in August, and gold reacted positively. Look closely at what the Fed’s doing, as that’s where the clues for the future are.

Consumer inflation eased further in August. According to the latest BLS report on inflation, the CPI increased 0.3% last month after rising 0.5% in July. The core CPI, which excludes food and energy prices, also softened — it rose 0.1% after increasing 0.3% in the preceding month. It was the smallest increase since February 2021. The deceleration was mainly caused by declines in the index for used cars and trucks, which fell 1.5%, and in the index for transportation services, which decreased 2.3% (driven by a sharp fall of 9.1% in airline fares).

However, on an annual basis, the overall inflation stayed practically unchanged, rising again at a disturbingly high pace, as the chart below shows. The overall index surged 5.3% in August, following 5.4% in the previous month. Meanwhile, the core CPI soared 4%, following a 4.3% jump in July. 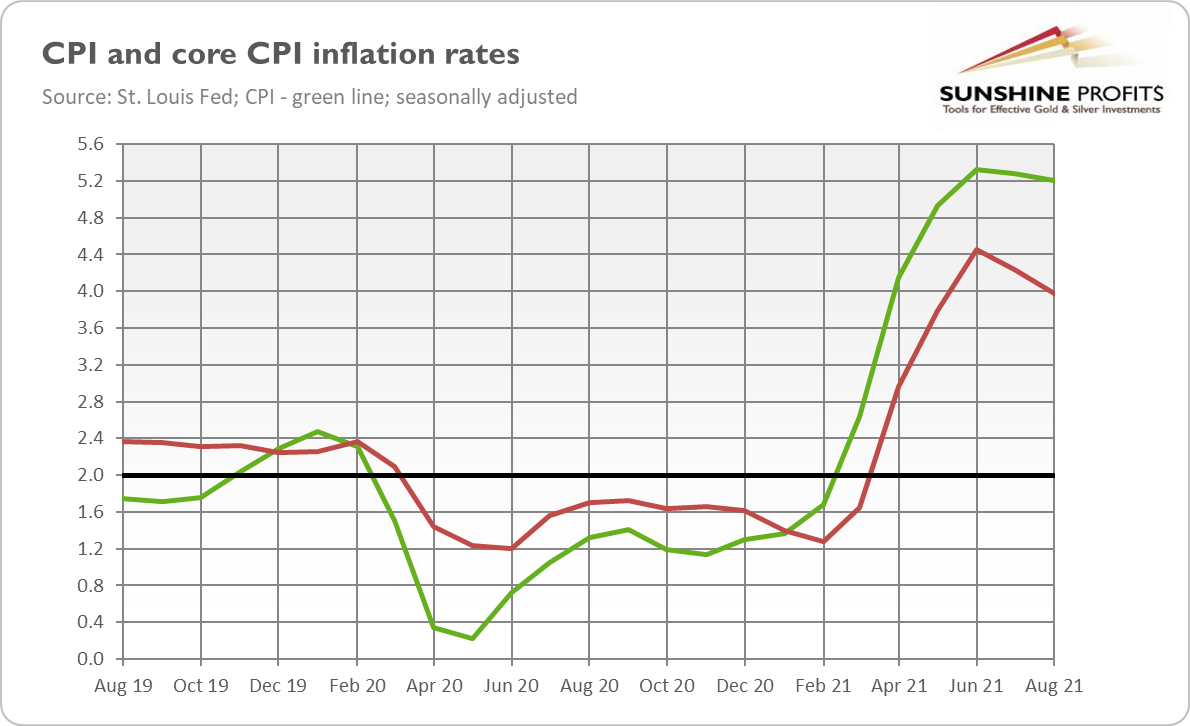 So, as one can see in the chart above, inflation peaked in June and decelerated for the second month in a row. However, what I wrote last month remains valid: “[inflation] remained disturbingly high, despite the deceleration in several subindexes, including the index for used cars. I dread to think what inflation would be if these categories weren’t moderate!”

Inflation did soften, but it remains elevated and above 5% on an annual basis. Moreover, it doesn’t have to go away anytime soon. Why? The first reason is that the supply-chain crisis hasn’t ended yet. The supply-side problems are keeping the producer prices hot. In August, the PPI for final demand rose 0.7%, following 1% in July. Although the monthly pace decreased, it was still above expectations. But over the past 12 months, the producer price inflation soared 8.3%, significantly faster than 7.8% in July. It was the biggest jump since November 2010, when the series started, as the chart below shows. 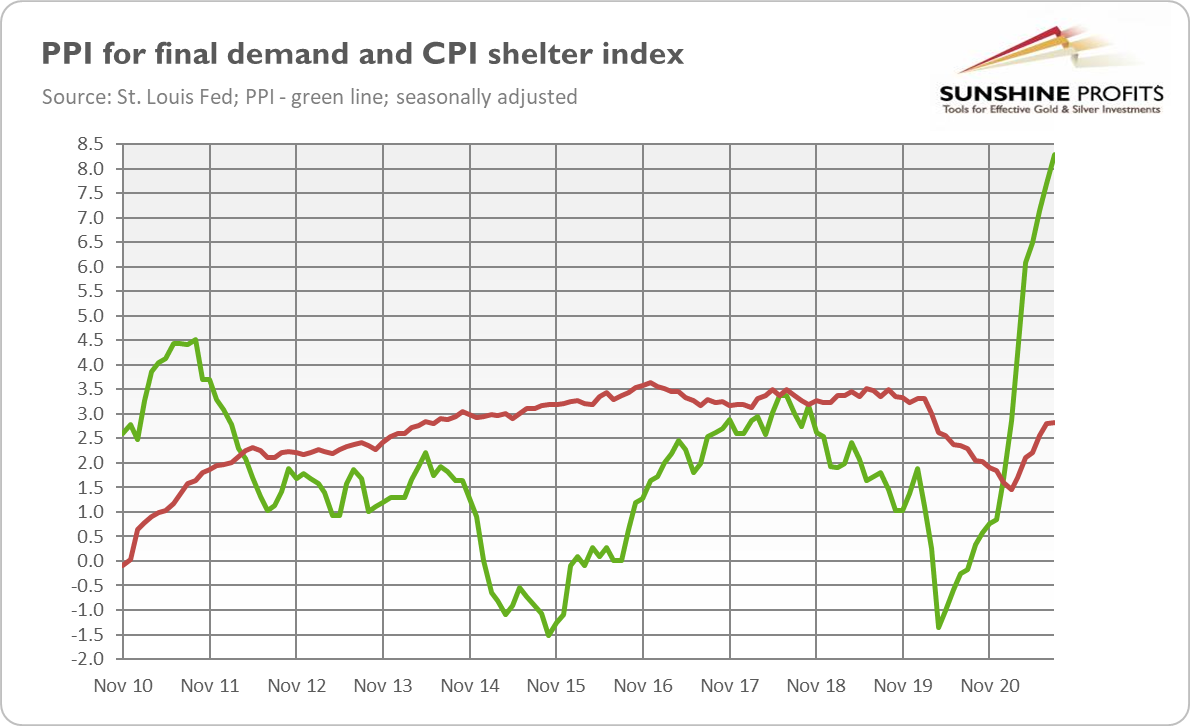 The unresolved supply-chain crisis and stubbornly high producer price inflation imply that inflationary pressures are likely to persist and to be translated into higher consumer prices in the future. Because inventories are tight and because the mindset has changed, producers are relatively easily passing on higher costs to consumers.

Secondly, the index for shelter – the biggest component of the CPI – has been rising gradually since February 2021, and it accelerated from 2.79% in July to 2.82% in August, as the chart above shows. As a reminder, home prices – which are not covered by the CPI – have been surging recently, which should translate into further increases in the index for shelter.

Last but not least, the annual growth of the M2 money supply has stabilized at about 12%, as the chart below shows. It’s of course much lower than the 27% recorded in February 2021, but it’s still almost twice as fast as the 6.8% seen just before the pandemic started. And the easy fiscal policy could also add something to the inflationary pressures if the fiscal deficits are monetized. All these developments suggest that inflation isn’t disappearing just yet. 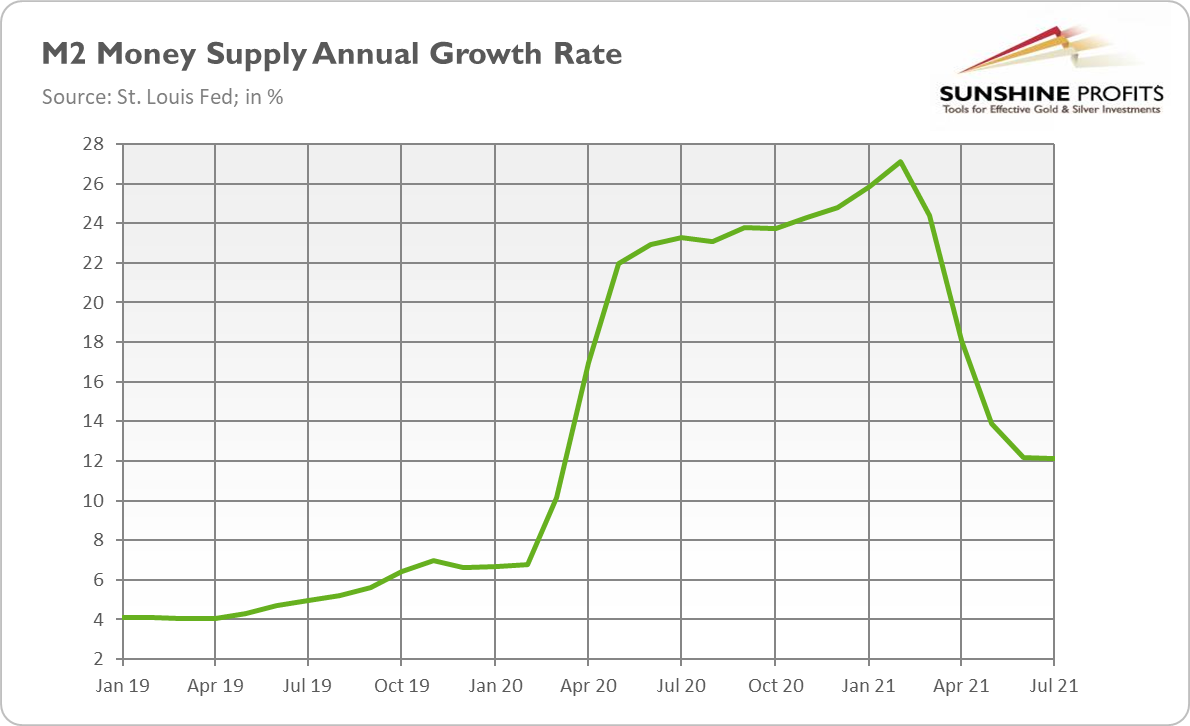 What does the August report on the CPI imply for the gold market? Well, theoretically, softer inflation should be negative for assets sensitive to inflation such as gold. The yellow metal is seen as an inflation hedge, but the data says that it shines when inflation is high and accelerating. So, the deceleration should be bad news for gold.

However, as the chart below shows, the price of gold has increased after the publication of the inflation report, jumping again above $1,800. Just as one month ago, slightly softer inflation has offered some hopes that inflation would prove to be transitory, in line with Powell’s narrative, and provide the Fed with an excuse to continue its ultra-dovish monetary policy. Indeed, according to the CME FedWatch Tool, the expectations for the Fed’s tightening cycle have diminished slightly from the previous week. For instance, the odds for the interest rate hike in December 2022 have declined from 54% to 50%, so it’s a coin toss. The softening of these expectations has supported gold prices. 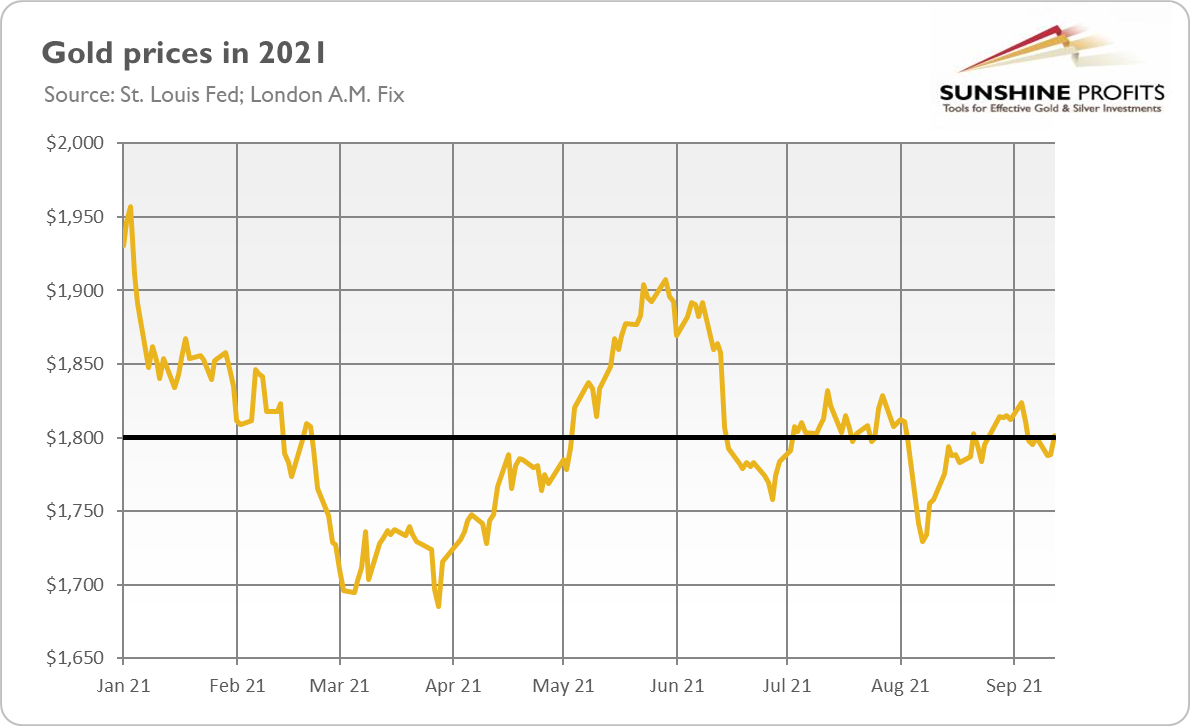 However, the dark clouds are still present on the horizon. Although the August CPI eases somewhat the need for the Fed to begin to taper its quantitative easing, the inflation report shouldn’t materially change the Fed’s stance. After all, inflation is still significantly above the target and partial normalization of the monetary policy is coming anyway.

What’s more, this month the FOMC statement will be accompanied by a fresh dot-plot. As a reminder, the latest Fed’s projections plunged gold prices, as they revealed that the US central bankers were eager to hike the federal funds rate earlier than previously thought. Given the increase in inflation since June and all the employment progress the economy made, the upcoming dot-plots could be hawkish and send gold prices lower. You have been warned.