One may say that not much has happened last week in case of gold and silver, but it’s impossible to describe the action in mining stocks in the same way. Miners started the previous week with a slide only to come back with vengeance before the week was over, changing the short-term picture for the entire sector. The weekly price changes show little changes as long as you only have a quick glance at them, without really digging into details. We did much more than just a glance. We unearthed… a weekly record. Last week was not as dull – overall – as it seems. There were two record-breakers in the precious-metals-related aspects. And since the implications extend from short- to medium-term, it’s definitely something that PMs traders need to consider.

Many precious analysts stop their analysis at gold’s US dollar analysis alone. Sometimes they add silver or – at most – mining stocks to the picture. But the focus on key ratios and on gold’s performance in terms of other currencies is rare. Silver’s non-USD performance is almost never discussed. And it’s a shame, because that’s where the current weekly extreme can be found. 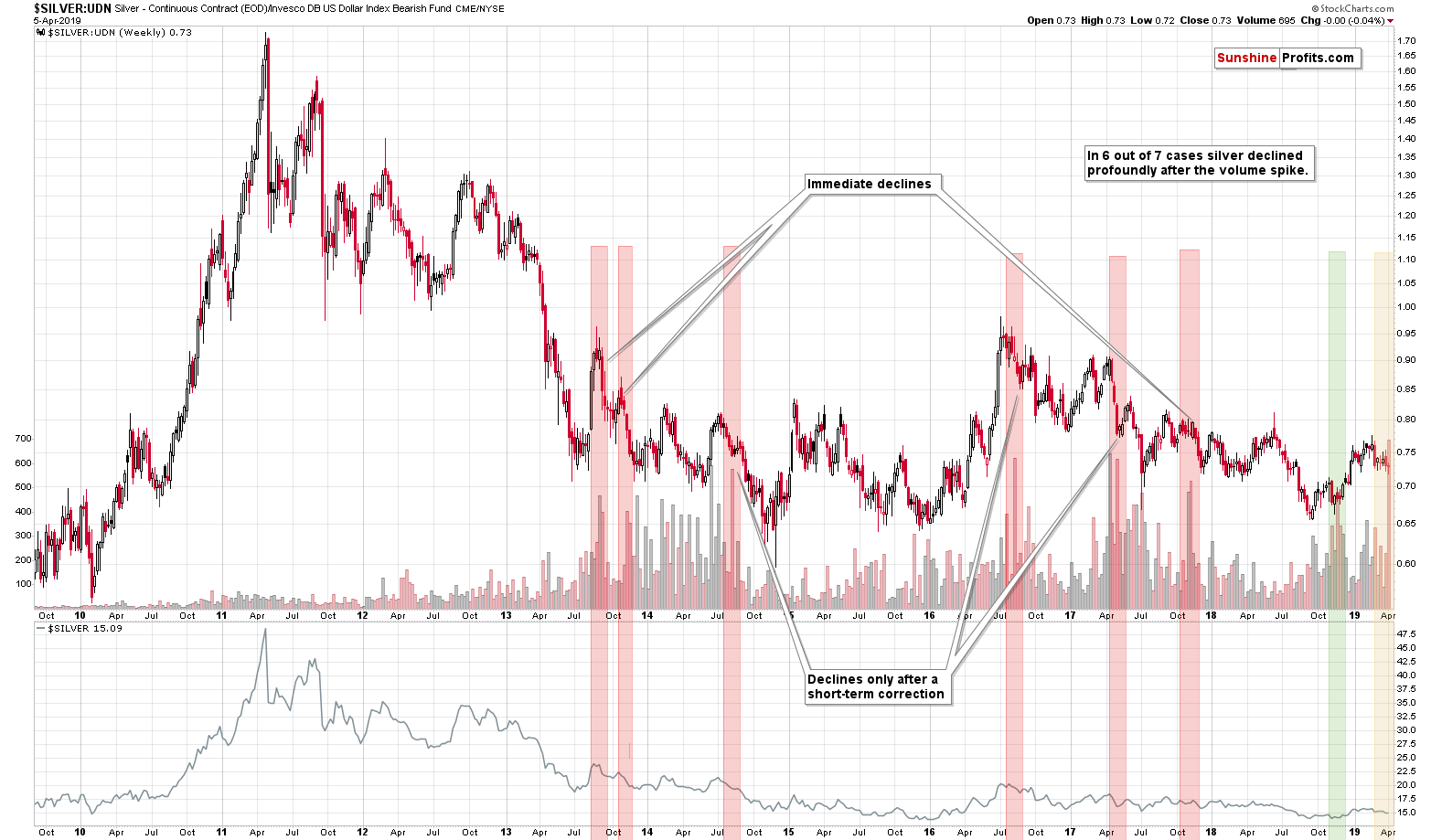 The above chart shows the silver to UDN ratio chart, which is a proxy for silver’s price in terms of currencies other than the US dollar. The UDN ETN is an inverse vehicle that’s based on the USD Index.

In order to check how silver would be doing without USD’s influence, we need to take the latter “out” of the silver price. If the USD was moving in the same direction as silver, we would simply divide silver’s price by the USD Index and we would get the desired values. But, since USD and precious metals move in opposite ways, we need to do the opposite – we will first inverse the USDX so that it moves – on average - in the same direction as the PMs, and then we will divide silver by it. The UDN ETF is an inverse USDX instrument, so it does exactly the above. The silver to UDN ratio is effectively very close to an indicator of silver strength on its own.

What is so special about the above non-USD silver chart? One thing is that it allows for technical analysis that could point to some developments earlier than in case of the regular USD perspective. That’s not the main point here, though. Besides, using ETNs that have sizable time decay can make their technical analysis considerably less effective than the analysis of the underlying, unleveraged instrument (that’s why it’s a mistake to focus on price formations in leveraged ETNs such as NUGT and DUST).

The special feature of the above chart is not the price, but the volume. And in particular, the ratio of volumes. Whenever people get excited about silver and at the same time they are not excited by the USD Index (at least as far the UDN ETF as a proxy for it shows), we get high readings in the volume. If the difference is huge, we get volume spikes.

Naturally, on a daily basis, there would be many spikes as there can be many individual reasons due to which a the UDN ETN can move on sizable volume, and these spikes would not necessarily be meaningful. But, in case of weekly price changes and weekly volume changes, these individual moves should average out, and the readings that we get should be meaningful.

Moving to the point, the weekly volume spike that we saw last week was the biggest that we ever saw.

Why should you care? Because in 6 out of 7 cases where we saw these huge volume spikes silver plunged either sooner or later. That’s the key implication – the silver picture remains strongly bearish for the medium term.

What is very interesting is the short-term implication. Half of the above-mentioned 6 bearish cases was followed by a decline immediately, but the other half was followed by a short-term upswing before the big move lower resumed. If we add the remaining – bullish – case to the above, we get a 4 out of 7 (57.14%) cases that support the bullish outcome in the near term.

This is in perfect tune with last week’s bullish reversal in gold, silver, and – especially – mining stocks.

This is also in perfect tune with what we have identified as an important, yet little known, extreme sign from the silver sector. Silver’s non-USD chart is not the only silver place where we saw record-setting volume spike. Silver stocks provided the heads-up even earlier. 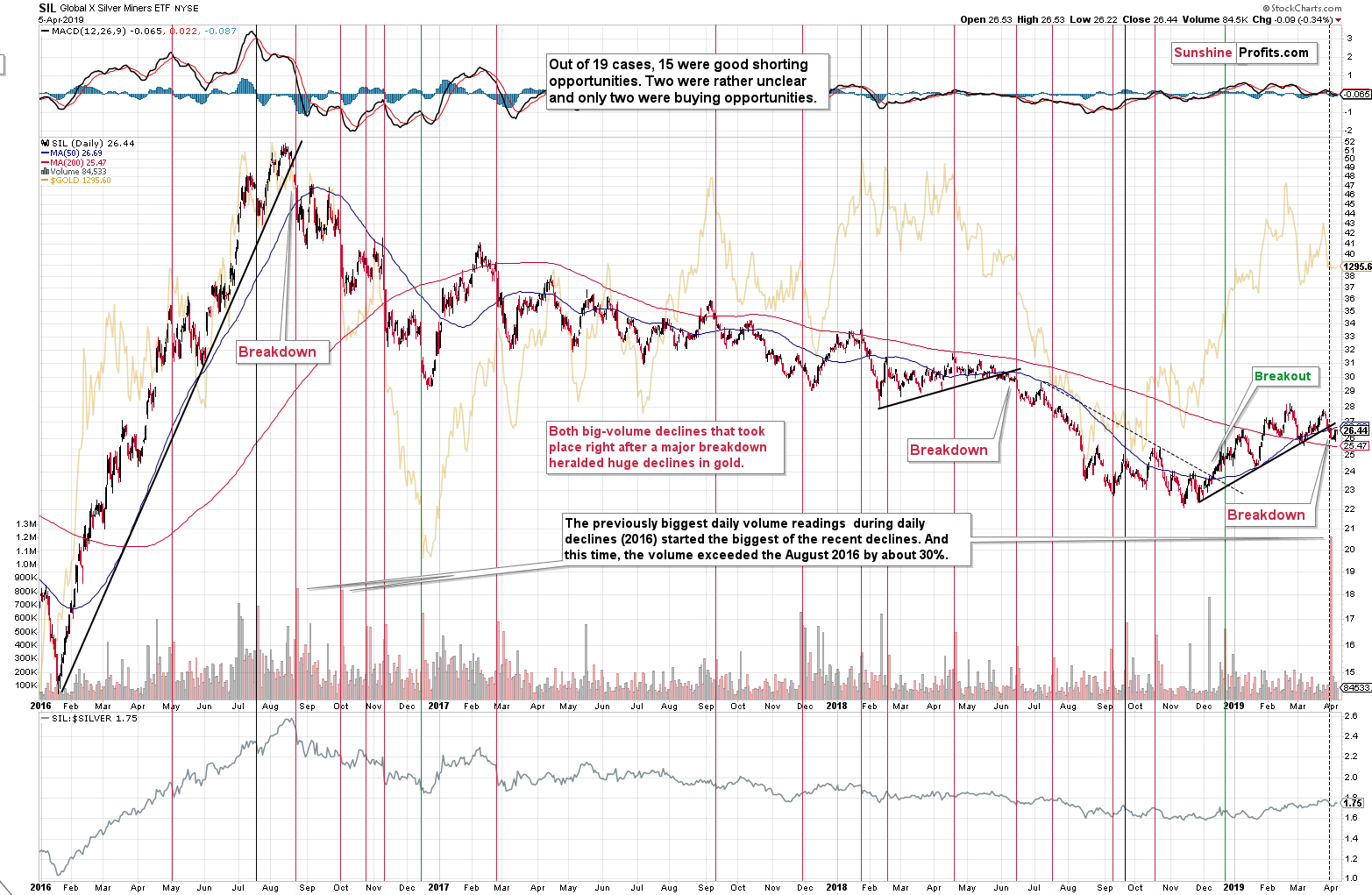 Gold price usually moves in tune with the silver price, and silver stocks usually move in tune with silver. The sizes of the moves are not identical, but the turnarounds often take place at the same time. The price moves are similar enough to say that the big moves will take place at the same time, but they are different enough for the markets to provide different signals. At times, one market might lead the other. There may also be other specific features and in today’s free analysis, we’ll focus on one of them. The premium version of this article includes much more details, especially the ones dedicated to the very short term outlook (upside target prices, trading position details etc.), but as far as the analysis of silver stocks and non-USD silver price is concerned, we are sharing with you the same analysis that we provided to our subscribers.

To put it simply, gold usually took a dive after silver miners declined on huge volume.

The above doesn’t reveal the efficiency, nor the severity of the signal, though.

The professional approach is to focus on the losses or things that invalidate a given theory first, and that’s exactly what we’re going to do now. Let’s start with the two cases that were actually buying opportunities. In the opening paragraph, we have mentioned that these two cases are not similar to the current situation. Both cases took place in December and we’re far from this month, but that’s not the main point.

Having said that, let’s move to the two unclear cases. One of them was mid-July 2016 case where the market moved higher one more time before forming the final top, and the other one was the September 2018 situation, when the market moved lower in the near term, but that was actually the start of a bigger upleg. One case was a good shorting opportunity in the medium term, but a bad one in the near term, and the other case was the opposite. None of them clearly invalidated the signal, but to be conservative, we can say that only one additional case confirmed the signal, while the other one didn’t. This means that we get the ultimate efficiency of 84.2% (16 out of 19). That’s an extremely high efficiency and…

You see, the very recent price/volume action in silver stocks was not average. It was special. There are two reasons for it:

April 1 volume in the silver miners was no April Fools’ Day joke. It exceeded the previous record by about 30%. Out of the recent years, we saw the biggest daily volume during a decline in silver in 2016: in August and September. That was the beginning of the biggest decline in gold of the recent years. In other words, the only analogy that we have based on the size of the volume points to the biggest decline in the recent history. And the volume was even bigger this time – it broke the previous record. Will the decline be bigger than the late-2016 one? That’s what is very likely based on many other techniques and what the above silver chart is confirming.

Moving to the second point, silver miners are right after a major breakdown. There were two similar breakdowns in the recent past that were then followed by the huge-volume signal. That was in August 2016 and in June 2018. In both cases, silver miners and gold continued to decline for many weeks.

Both the above-mentioned factors suggest that 84.2% efficiency is likely understated and should in reality be higher. In particular, both links point to analogy between the current situation and what we saw in August 2016. It then took gold less than 4 months to decline over $200. And let’s keep in mind that the volume was much higher this time, so the move – based on the above chart alone – could also be bigger this time.

There are two things that we would like to add to the above quote based on the recent short-term developments:

Still, the above doesn’t rule out the possibility – and likelihood – ofseeing a short-term upswing before the decline resumes. Silver stocks would likely simply verify their breakdown in this case.

Summing up, the medium-term trend remains bearish, but the short-term is bullish based on the strong reversal that we saw last week and the signals that we get from the little-popular silver charts either confirm or not invalidate the above.