The silver market is on the move. In fact, it’s finally moving out ahead of other precious metals and showing some real leadership.

After the panic selling of March briefly brought spot silver below $12/oz, prices have since surged by 50%. That’s an impressive move to take place within the span of just two months.

The question for investors now is whether the recent rally in silver is fleeting or sustainable – whether it’s evidence of extreme market volatility that suggests more danger ahead or the first leg of a much larger bull market to come.

In our view, there is good reason to believe that the March 2020 lows will never be violated and that silver is therefore in a structural bull market.

Last Monday, Money Metals posted “Silver Breakout in Progress” as a market update. We noted, “Silver prices will run into some overhead resistance just above the $16/oz level. Once broken, that technical line on the weekly chart could serve as a springboard for a run toward $19/oz – and ultimately higher.”

The technical clues we presented for an imminent breakout were confirmed that Friday. Silver springboarded to $17/oz. Then yesterday, carryover momentum brought prices up near $18/oz before this morning’s pullback. 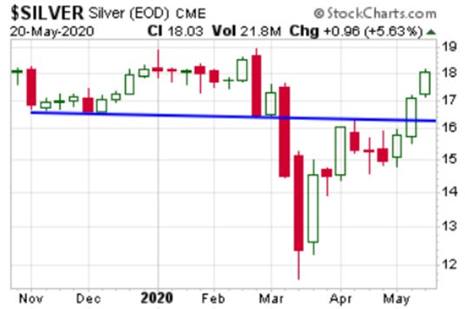 At the same time, there are growing signs of shortages in physical silver, at least in some parts of the world. This week, bullion banks have been scrambling big time to find the 1,000-ounce silver bars they need to make near-term delivery commitments on the Comex. This shortage in the U.S. of deliverable silver has caused New York spot silver prices to diverge more than 50 cents above London spot. Such a spread is extremely rare, and arbitrageurs do not seem able to transport enough silver from London to New York to close the gap anytime soon.

None of this means there can’t be sharp pullbacks to come. Silver is a notoriously volatile commodity that seems to specialize in shaking people out (especially leveraged speculators in the futures market).

Although nothing is guaranteed in these wild and often manipulated markets, the blue line shown in the chart above, which had been resistance, will likely now serve as final support in the event of a selloff.

Fundamentally, a silver price below $16/oz is simply not sustainable given that all-in mining costs for the metal currently range into the high teens.

While another bout of irrational panic selling over virus fears is possible should it make a deadly resurgence, the remaining upside potential for silver in the months and years ahead far exceeds its downside risk.

Silver is historically cheap versus just about any other commodity or asset class on the planet.

When measured against gold, silver has never been cheaper – going back through hundreds of years of record-keeping – than it was during the depths of the March selling.

Silver’s unprecedented cheapness versus gold (at one point 1/126th the gold price) gives us further confidence that those extreme lows were anomalous displays of “peak fear” that will never be seen again.

At present the gold:silver ratio comes in right around 100:1. Although still extremely elevated (by normal standards) in favor of gold, silver has been rapidly gaining ground against its pricier counterpart and can be expected to continue closing the gap as the bull market in both metals advances.

With an election coming up and uncertainties surrounding the economy and COVID-19, investor interest in precious metals is likely to remain robust.

Fed chairman Jerome Powell recently assured Congress the central bank is “committed to using our full range of tools to support the economy.” They are all “tools” of currency debasement, regardless of what jargon or acronyms monetary planners trot out to describe them.

Granted, safe-haven bullion and ETF buying could taper off in the event that the economic outlook brightens and investor fears recede.

But since more than 50% of silver demand comes from industrial applications, a recovering economy isn’t necessarily a negative for prices – especially when so many other fundamental and technical indicators are now turning bullish.