Major markets are giving mixed signals over the outlook for risk appetite. After threatening to turn corrective in the past week, Wall Street equities staged an impressive rally yesterday. However, with Treasury yields still struggling around one month lows, and the US dollar finding support (helped by impressive housing data), the sustainability of renewed buying on Wall Street could be questionable. There is still a dark cloud of faltering progress in the economic re-opening. Fed chair Powell believes that the US is into an important new phase sooner than expected, but when the WHO suggests the pandemic is actually speeding up globally, this is likely to drive continued caution amongst traders and investors. The dollar is regaining lost ground across the major currencies today and this is just beginning to weigh on equities slightly once more. This is also lending a consolidation to the breakout on gold and dragging on oil. Whilst yesterday was a good start to the week for risk appetite, it would appear that today is beginning to see markets swing back the other way. It will be interesting to see what the impact on US Consumer Confidence levels are after the easing of lockdown restrictions have been phased back recently.

Wall Street closed decisively higher yesterday with the SP 500 +1.5% higher at 3053, but with futures just slipping a shade today (E-mini SPs -0.2%) this positive momentum is just leaking away again. Asian markets have reacted positively to better than expected Chinese PMI data, with the Nikkei +1.3% and Shanghai Composite +0.7%. However, this has not helped European markets, with a mixed look to the early moves, as FTSE futures are slightly lower by -0.2% and DAX futures all but flat. In forex, there is a stronger USD across the major pairs, with EUR and NZD just leading the underperformers. In commodities there is a consolidation on gold and silver, whilst oil is slightly lower by around half a percent.

From a long list of central bankers set to speak today, Fed chair Powell is the most important, with his testimony to the House Financial Services Committee at 1730BST. There are a few other Fed speakers to watch for too, with John Williams (centrist voter) at 1600BST, Lael Brainard (leans slightly dovish, voter) at 1605BST, and Neel Kashkari (dove, voter) at 1900BST.

June has been a really frustrating month to be trading silver. False upside moves, failed downside breaks and a lack of conviction has seen the market forming a range between support around $17.20 and resistance of $18.36. The three month recovery uptrend has been creaking in recent sessions (and perhaps needs re-aligning), but with gold now making moves to break higher, is the same ready to be seen on silver? It is noticeable that silver has struggled in recent weeks, with momentum indicators reflecting a frustrating time (the RSI is now stuck under 60). However, Stochastics are beginning to tick higher and MACD lines are bottoming. Upside pressure is building to test $18.05 and a closing move above would help to re-engage the bulls to move towards resistance at $18.36. Daily RSI moving above 60 would be confirmation of building positive traction. Already we have seen the support forming above the 76.4% Fibonacci retracement (of $11.62/$18.93) at $17.20 and if the market can begin to develop positive traction through $18.35 a full move to test $18.93 would be open (along with a range projection target of $19.50). We are happy to be long of silver now the market is beginning to pull higher (last week’s low of $17.39 helps the support forming process). With momentum indicators looking primed, the bulls just need a nudge forward now. We look to buy into near term weakness supported above $17.20/$17.39 for pressure on $18.35 and beyond. 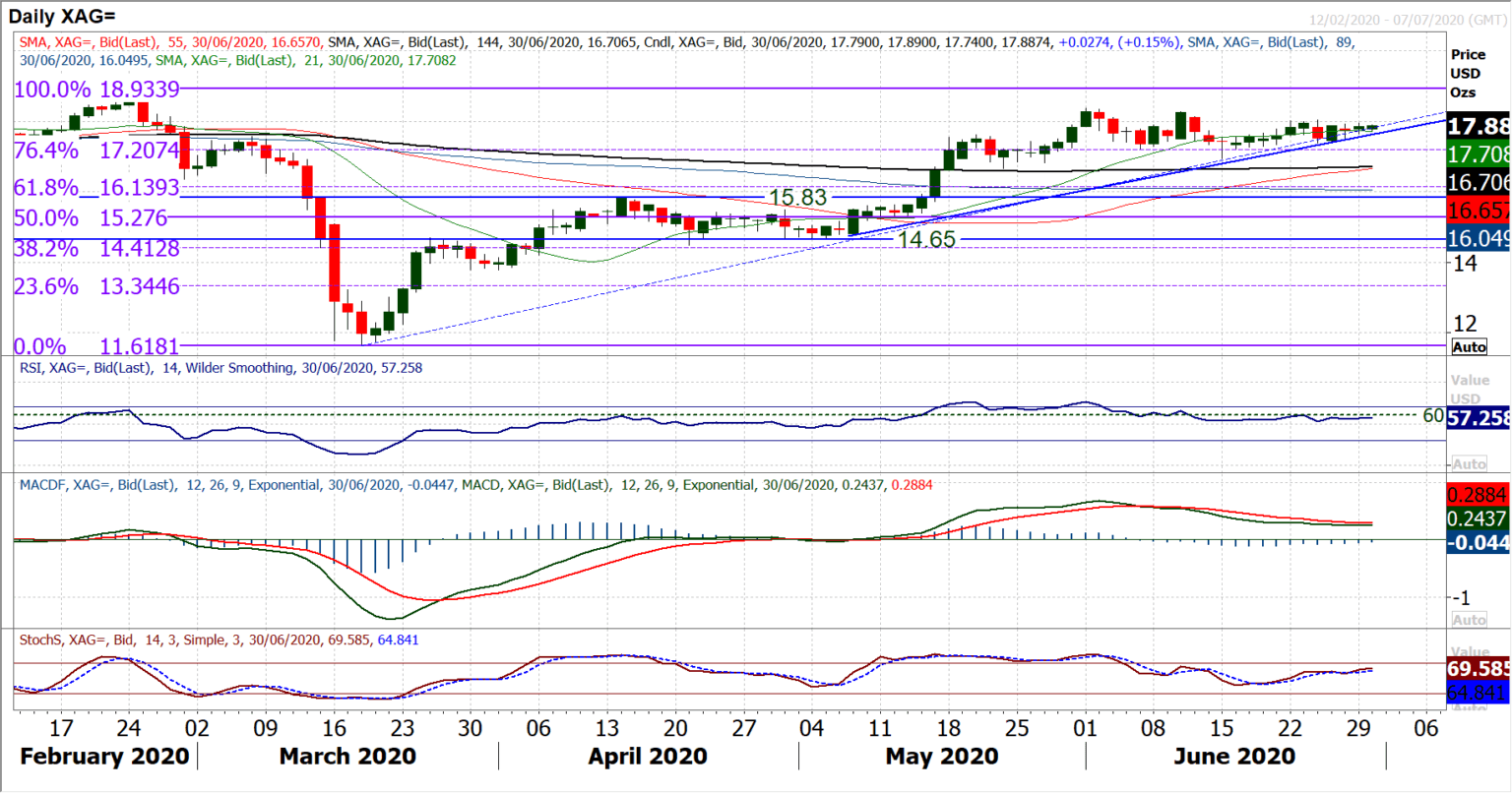 The recovery is settling into a phase of uncertainty now. The price volatility has settled down in the past month, with the Average True Range now sitting at around $2.15, and the daily candles are beginning to lose consistency of direction. Turning into more of a consolidation means that the six week uptrend is being chipped away (this is the second uptrend of the recovery we are going to have to re-align) as the bull run further loses traction. Despite this, there is still a positive bias to the oil outlook, with support still forming at higher levels. However, the rolling over on momentum indicators suggests that the move is losing impetus. The daily MACD lines in decline from a bear cross are the main concern, but whilst RSI and Stochastics remain above their 50 levels, then we would still see a positive bias. Support between $39.50/$40.00 is important on a near term basis and if breached would mean that oil is in fact in a multi-week range (between $37.00/$43.95). So the bulls need to hold their ground and build back above yesterday’s high of $41.95 to test $43.95 again. 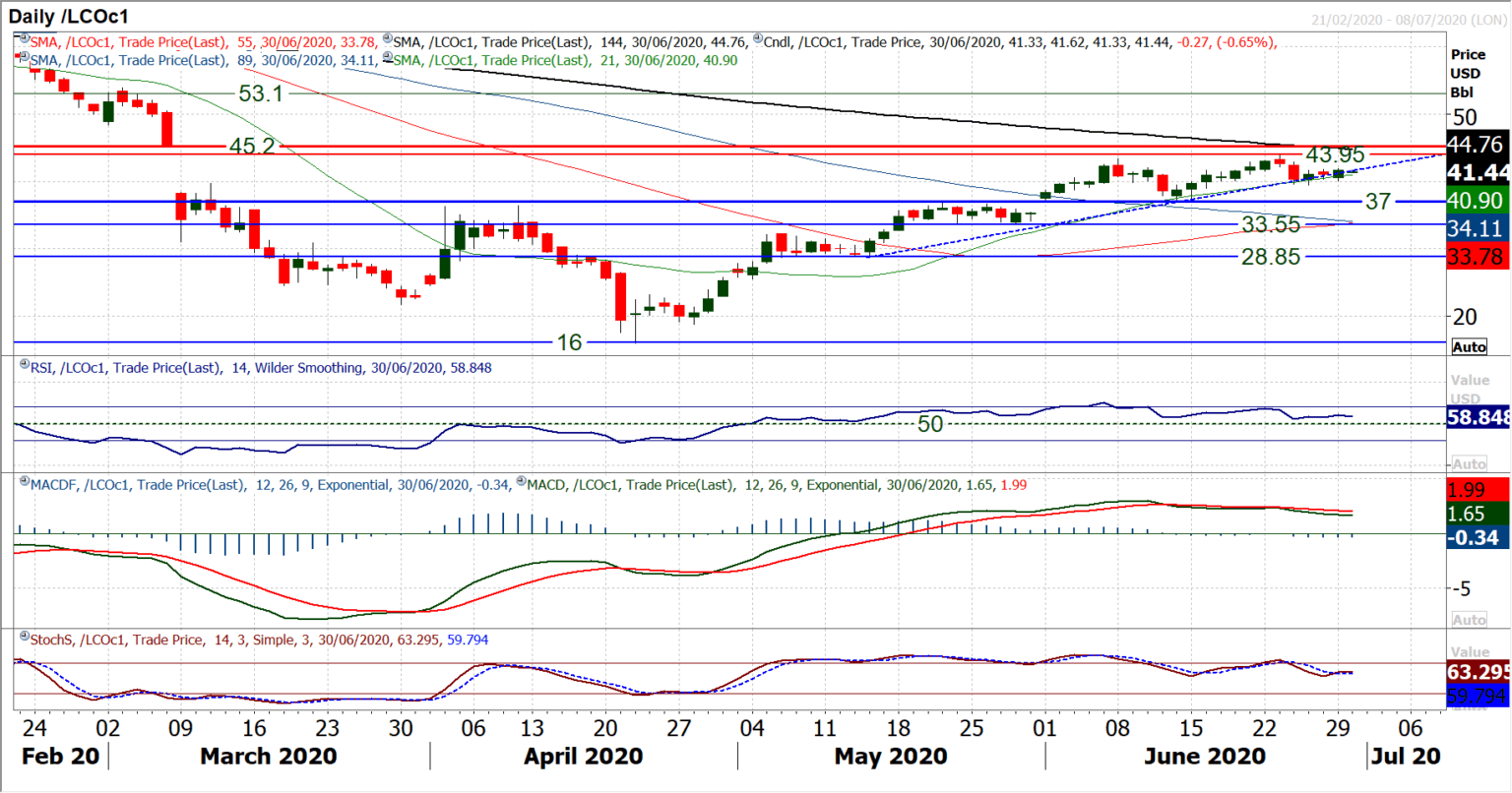 The bulls have fought back at the beginning of the week, posting a strong recovery session of +2.3% which goes a long way to negating the big sell-off from Friday. Defending the support at 24,765/24,845 is a key medium term objective as the market has slipped away in recent weeks. So, leaving support at 24,970 from Friday’s low could be an important moment for the bulls, meaning that the daily RSI has picked up again in the mid-40s and Stochastics also begin to ease their deterioration. However, the hourly chart shows that the Dow now needs another positive session today to build on this rebound. The hourly RSI has been faltering consistently around 50 for the past two weeks, with hourly MACD struggling under neutral. The bulls need to push the recovery through these levels to suggest a rebound has traction once more. Resistance is initially at 25,770 with overhead supply an issue towards 26,000. If the market can pull above 26,000 then the more considerable task of closing the island reversal gap can resume. 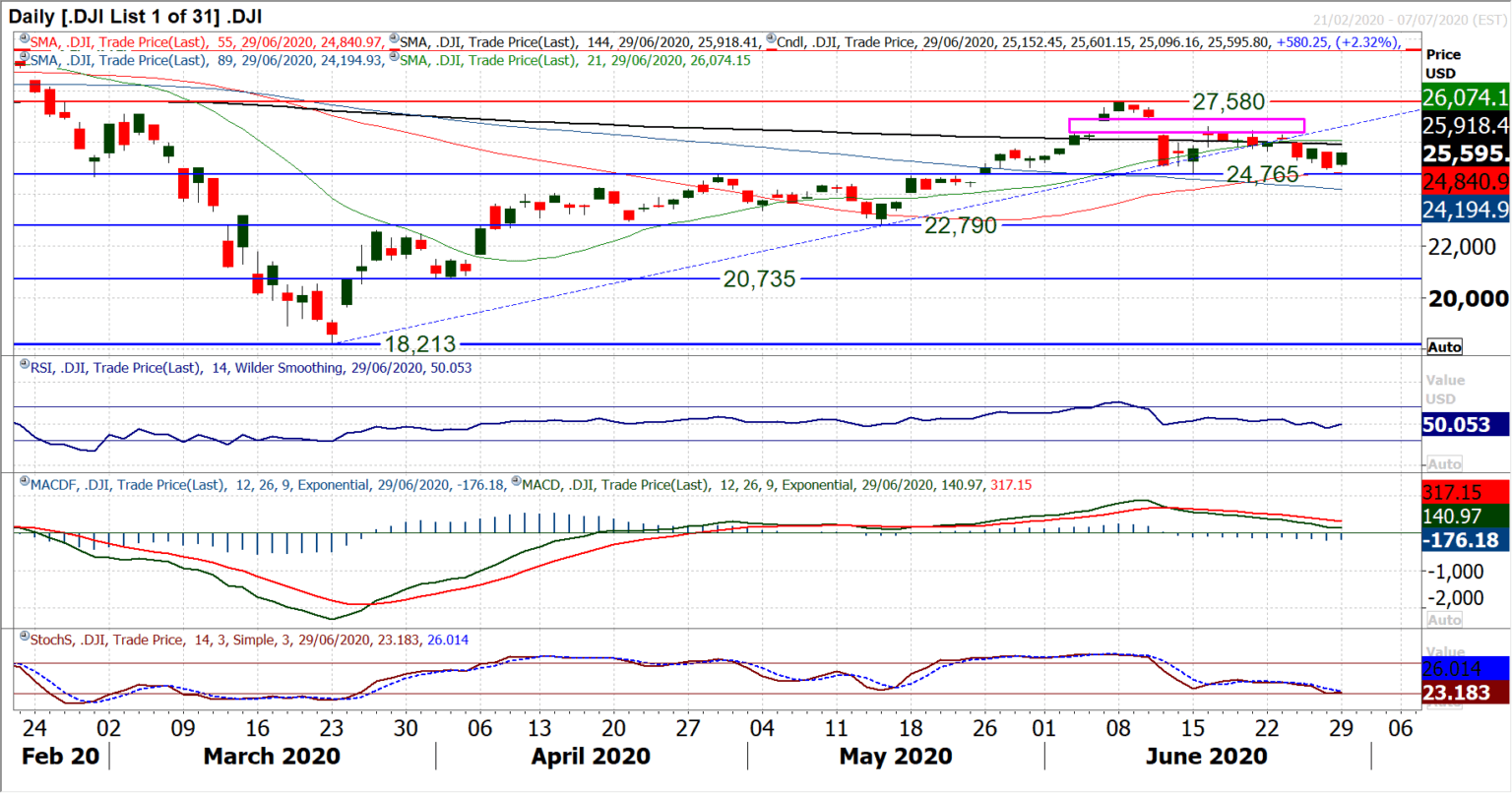