Climate change has continued to be a big topic in the news, especially with record temperatures again this summer. Are humans the primary cause?

When this first became a major issue many years ago, I initially was more skeptical of the human impact. I had studied long-term climate cycles and saw how much they’ve varied simply from natural trends. Were we big enough to impact substantially?

The first wake-up call I got was when I looked back at the key very predictable longer-term cycles. Every one of them, from very long to shorter, were pointing towards moderate cooling. Even the shorter-term sunspot cycles keep coming in lower intensity since 1959 – and more so since 1990, which has a cooling effect – and temperatures keep rising anyway!

That’s when I realized that we must be driving that rising CO2 trend and its correlation with temperature that has held throughout history.

In my most macro analysis of all the global trends, the biggest is simply accelerated urbanization since 1920. Developed countries urbanized fully since the mid-1800s, but emerging countries are only starting to in the past several decades – and who are the big polluters now? China, and increasingly India.

Look at this chart. It shows a correlation between urbanization and CO2 on a 40-50-year lag. Here, 50 is used. 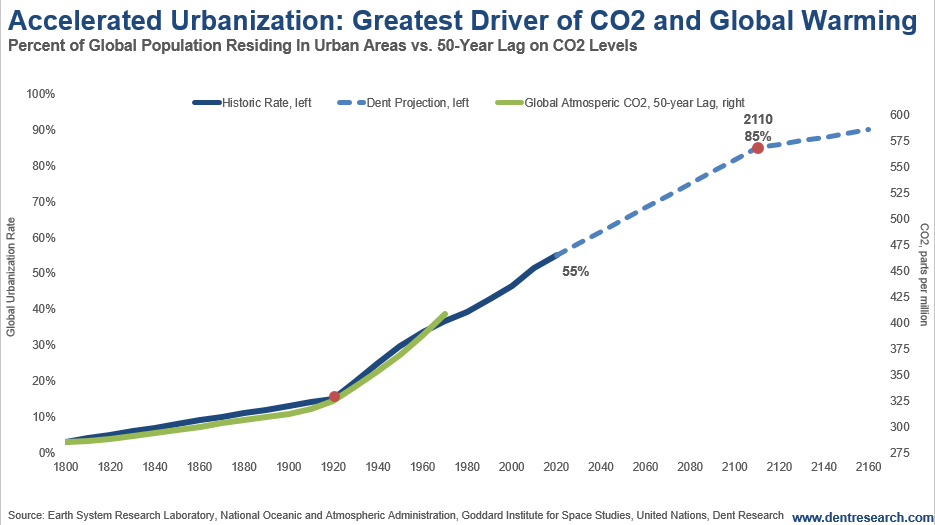 Urbanization roughly triples GDP per capita, and then people use a lot more energy.

But why the lag? The scariest part about CO2 (and methane) emissions in the atmosphere is that they are cumulative. They last a long time and build upon each other like compound interest. Hence, a 40-50-year lag makes total sense to me.

That means that even when global urbanization is predicted to slow down again near 80% urban around 2110, the damage to the atmosphere and warming will continue for another 40-50 years… Damn!

I know this is a politically sensitive topic that divides largely on partisan lines. But my forecasting techniques do not – except in shorter-term scenarios.

I came into this issue a sceptic… I am not now. This is a serious issue and will become more so… another reason I’m glad I’m in mountainous Puerto Rico rather than flat Florida.

We’re lucky that the sunspot trends are working in our favor and will likely continue to do so for at least the next 10 years.