I have a close friend from college who lives in Houston. I worried about him and his family as Hurricane Harvey approached last weekend, and worried even more when the weather system stalled over the area. More than 50 inches of rain fell over a five-day period, a total exceeding a normal year’s precipitation for the city.

I was able to reach my friend by phone on Monday. The good news is that everyone was fine; the bad news is that five inches of water had covered the floor of his house, and people he knew were being airlifted from their homes. He anticipates that it will be a long while before life in the region returns to normal.

Our primary thoughts are with the residents of Houston, where we have an office and a large community of clients. Northern Trust made a substantial corporate donation to the relief effort, and I was happy to add to it. (Should you be so moved, the Red Cross is accepting contributions here.) But duty also requires us to reflect on the economic issues raised by the disaster.

A comprehensive damage assessment won’t be available for some time. Loss estimates range from $75 billion to $125 billion, which place Harvey among the top 10 global natural disasters of the past 50 years. 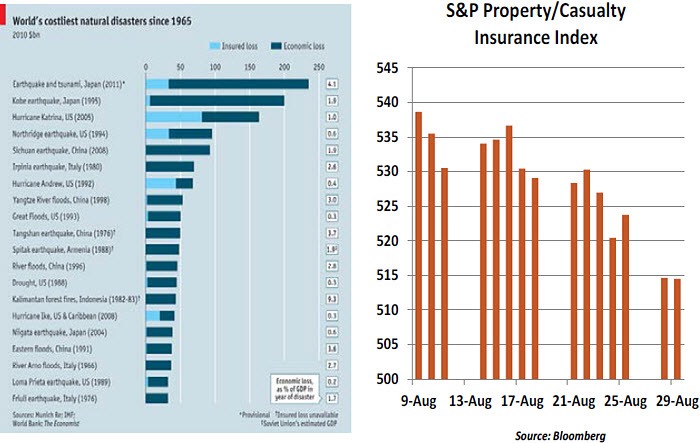 Some of the losses will be covered by insurance. Carriers are in strong financial condition, so honoring claims should not pose a threat to their solvency. Nonetheless, the property/casualty sector lost an estimated $12 billion in market capitalization in the days following the disaster.

But standard homeowner’s policies will not reimburse losses due to floods, and less than 20% of Houston-area residents have flood insurance. Almost all of those that do have coverage get it through the National Flood Insurance Program (NFIP). Unfortunately, the NFIP is nearly $25 billion in debt because of losses related to Hurricanes Katrina and Sandy; it will require substantial additional resources to deal with Harvey-related claims.

One reason for the program’s deficit is that the insurance it provides has been underpriced. “One-hundred year floods” occur much more often than once a century, and the damage they cause is getting progressively more severe. Global warming plays a role here; while debate continues over the proximate causes, the data clearly show that temperatures and sea levels are rising, making it easier for storms to gather strength and create flooding. The maps that guide the NFIP’s insurance rates have not kept current with these developments.

For those lacking coverage, emergency funds will almost certainly be appropriated. It sounds heartless, but some will observe that the national public is essentially providing free insurance benefits to those who do not purchase it for themselves. If residents had to internalize the full costs of living near flood plains, they might be motivated to move to higher ground. (The Houston metropolitan area, which is only 80 feet above sea level and lies directly in the path of potential Caribbean storms, has seen its population double since 1990.) This would seem to be a classic case of moral hazard.

A Texas Tribune article from last December called Houston “Boom Town, Flood Town.” The city’s rapid development has made it more vulnerable to heavy rains: with more of the landscape paved, there is less open ground to absorb moisture. This adds to the risk of flooding during extreme weather.

Experts suggest that small investments in infrastructure can save significant sums during times of duress, but public budgets are tight and legislatures have been reluctant to appropriate funds for this purpose. As James Surowiecki noted during the aftermath of Hurricane Sandy, “Disaster Economics” need to be rethought.

Harvey’s destruction also reminds us that America’s oil refining facilities are heavily concentrated in a region that is prone to weather-related disruption. Nearly 45% of capacity lies close to the Gulf of Mexico, and a good portion of this was knocked offline by Harvey. Downstream (no pun intended), railroad tracks, pipelines and ports have been affected by the storm, so transportation may be an issue even when production can be restored. The United States has become a more prominent exporter of both crude oil and its derivatives; those reliant on these supplies (primarily in Mexico and Latin America) may see some interruption.

Prices of refined products (gasoline and jet fuel, in particular) have risen sharply in the past week. These trends should reverse themselves before long, but it will be too late to offer relief to Americans traveling over the Labor Day holiday. We are not expecting any lingering impact on U.S. inflation.

Efforts to reduce the geographic concentration of American energy processing inevitably run into “not in my backyard” forces which advance environmental or aesthetic concerns. But this leaves the petroleum processing system vulnerable to periodic supply disruptions and consumers vulnerable to the energy price spikes that accompany them. When there is local control over elements of a national (or international) economic network, the resulting design may not be entirely optimal.

If there is a silver lining to the dark clouds that hovered for so long over Houston, it is that natural disasters can be springboards to economic activity. To start with, there is a massive rebuilding effort at hand, which will require substantial supplies and tradespeople. Further, studies have shown that disasters can produce a form of creative destruction that paves the way for stronger firms and improved infrastructure. (A summary of these effects can be found here.) But there are better ways to stimulate a local economy, methods that don’t involve the substantial human cost that Houston is bearing. 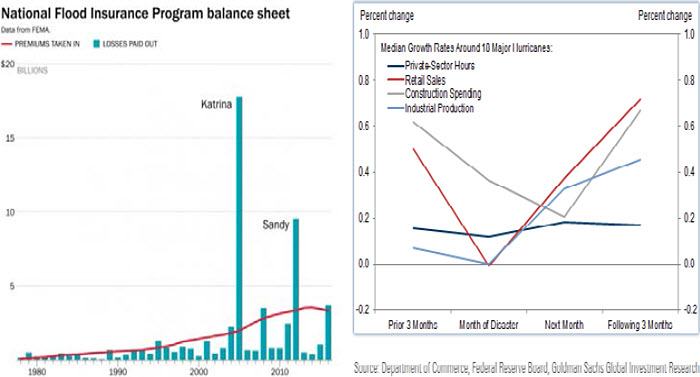 Harvey will add a degree of difficulty to Congressional debate in the coming weeks. Legislators were already facing tight deadlines and tough choices during the session that will commence after Labor Day, but they’ll have to reauthorize the NFIP (which is set to sunset on September 30) and allocate relief funds promptly. Neither of these actions will be friendly to the deficit, but the imperative of appropriating support for Houston residents
may make it easier for Congress to contemplate a debt-ceiling extension and avoid a government shutdown.

In sum, the disaster in Houston touches on a number of economic themes that deserve additional attention: the pace of development, investment in infrastructure, insurance underwriting and energy security. The reflections on these topics that emerge from the devastation will have value far beyond the state of Texas. Less publicized but more tragic, flooding in India and Africa this month claimed thousands of lives and left millions homeless.

Impressively, the storm did not rob my friend of his sense of humor. An amateur aviator, he has spent the past several years building a small plane in his garage. He has become exasperated with the effort, though, leading him to hope that the plane would float away as the flood advanced. Alas, the plane was spared; my friend, and the Houston area, will have to work hard in the coming months to reach cruising altitude.

While most of the developed world was celebrating a robust second quarter, revised estimates of the United Kingdom’s growth in gross domestic product (GDP) showed relative stagnation. The impacts of a weak pound and Brexit-related uncertainty have held back household spending and business investment. Both grew at a scant 0.1%.

Real wages in the U.K. continue to contract, due largely to high inflation (largely exchange rate induced). At the same time, the British unemployment rate continues to fall to new lows and total employment continues to climb to new highs. Low productivity likely explains the coincidence of wage stagnation and a seemingly tight labor market. In the light of this, we expect the Bank of England to continue with its accommodative stance. 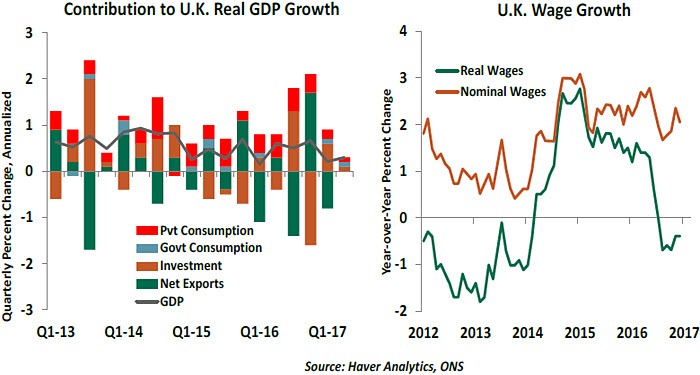 As we had predicted earlier in the summer, the British government seems to have softened its stance on several Brexit-related issues. But there is confusion surrounding the British government’s exact position on these matters (the Labor Party has pressed more forcefully for a softer line) and the cabinet continues to speak in multiple voices. The recently concluded round of negotiations with the European Union made little progress.
Until there is additional clarity surrounding the terms of separation, the U.K. economy will continue to struggle.

The recent cinematic dramatization of the 1940 Dunkirk evacuation has renewed the debate around how the Britain sees itself and its history. Many commentators have remarked that the movie reinforces the myth of ‘post-Empire’ Britain as standing alone in victory against the Axis, and how that myth may have contributed to Brexit. But that is a misreading of Dunkirk, both the event and the movie. As is becoming increasingly clear, the best case scenario for Brexit — like Dunkirk — is likely to be deliverance, not victory. Success will require a Britain that cooperates with its allies in Europe and beyond, not an isolated nation adrift in the Atlantic.