This year highlights the titanic struggle between the two monsters ruling interest rates markets: carry and volatility. The latter has driven rates over the past few weeks, but the respite could mean a sharper adjustment higher in rates and volatility down the line. There is potential for collateral damage.

Supply pressures need not be temporary

The reasons behind the jump higher in interest rates since Friday’s US job report, namely a 30Y green German syndication yesterday and 10Y and 30Y US auctions today and tomorrow, are mostly of transitory nature. Their market impact has already been more than one would expect in normal times. Except, of course, that current times are nothing like normal times. The current macroeconomic context means that otherwise benign drivers, such as supply, are used as triggers for more substantial moves.

To summarise, both German Bund and US Treasury valuations are a far cry from reflecting the outlook for growth and inflation over coming years. It can reasonably be argued that the longer the interest rate tenor, the more doubt one can have about the sustainability of the economic recovery, thus providing justification for depressed nominal yields. We do not subscribe to this view, but it will take some time to be proven right or wrong.

In the meantime, those reducing interest rate exposure forego a juicy carry, especially when compared to what has prevailed in recent years. It is thus understandable that with central banks kicking the can down the road when it comes to normalising monetary policy, longer interest rates adjust only slowly to a more upbeat view of the world.

Carry offered by US Treasuries is at 4 years high 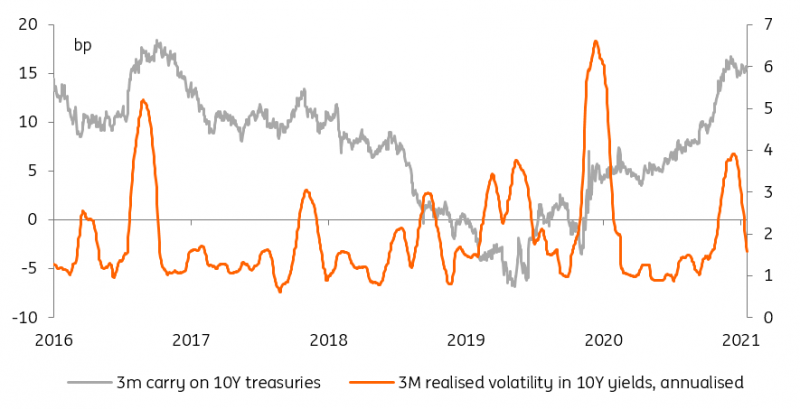 That state of play can only be a transitory step in the path towards higher interest rates in our view. The question is when does the rise resume? We would venture that today’s US inflation print is already well flagged (see next section) but price action so far this week suggests a growing degree of nervousness on fixed income markets.

In our view, there is a strong tendency for bond sell-offs to be self-perpetuating. For fixed income investors, much of the return comes from carry, but volatility (greater when rates increase) eats into those returns. Market moves like yesterday’s threaten the return of bond buyers, so we suspect more selling will emerge. This is particularly true as there seems to be a strong consensus in favour of higher rates. Our 0% target in 10Y Bund yields looks more within reach than ever, possibly this quarter.

The final releases, unlikely to see much modification from the initial readings earlier this month, and thus unlikely to move interest rate markets. This is the case of French and German April CPIs

The first releases, subject to much more uncertainty. This is the case of the US April CPI published this afternoon.

It is thus fair to say that the main item on today’s calendar is the US CPI. A year-on-year reading of 3.6% should in theory send cold shivers down the spine of any bond investors but, in this instance, much of the increase owes to base effects from depressed prices one year ago, in the midst of the pandemic. As a result, a more accurate measure of contemporary price pressure is thus the month-on-month measure and, in that regard, today’s release should actually mark a deceleration compared to March (from 0.6% to 0.2% according to Bloomberg).

Combined with the fact that this jump in inflation is well flagged, we think it could prove a non-event. We’re not changing our near-term view towards higher rates however. Yesterday has proven that drivers as predictable as a bond supply can send bond markets in a tailspin, and yields are still well below what we would consider ‘fair value’. Incidentally, the US Treasury sells $41bn of 10Y Notes today.

EUR/USD rebounds towards 1.1950 after German and Eurozone Preliminary PMIs beat expectations. The US dollar stalls its recovery amid dovish Fed's Powell. US PMIs and Fedspeak remain in focus.

GBP/USD advances towards 1.4000 ahead of UK PMI

GBP/USD bounces back towards 1.4000 ahead of the UK PMIs. The US dollar pauses its rebound and turns south amid a risk-on market mood. Renewed Brexit optimism also underpins the spot.

AAPL shares are continuing to push higher as FAANG names and the Nasdaq lead the equity markets higher. Apple shares have struggled for momentum since releasing results in late April as the Nasdaq, in particular, suffered for most of May.