Data released this morning confirmed that U.S. real GDP grew at an annualized pace of 2.1% in Q4-2019. The outturn was not surprising because it was the third time that the Bureau of Economic Analysis (BEA) has released data on Q4-2019 GDP. The data confirm that GDP growth in the fourth quarter was driven primarily by growth in real personal consumption expenditures (PCE), which rose 1.8%. Nonresidential fixed investment slid 2.4%, and de-stocking sliced a full percentage point off of the overall GDP growth rate. In sum, the U.S. economy came into 2020 with a bit of momentum behind it.

Of course, the outlook has darkened significantly because of the COVID-19 outbreak that has caused economic activity in some industries and in some parts of the country to grind to a halt. The outbreak in the United States was generally limited in January and February, so we still look for GDP to edge up 1.2% in the first quarter. But we forecast that real GDP will nosedive roughly 15% (annualized rate) in the second quarter, which would be the steepest rate of contraction on record (top chart). Due to shutdowns in some industries such as airlines, restaurants, hotels, etc. we look for real PCE to swoon 17% (middle chart). But assuming that the country manages to contain the pandemic in the not-too-distant future and that it does not reappear later this year, we look for real GDP growth to turn positive again by the fourth quarter. Details of our forecast can be found in the report that we published on March 25. 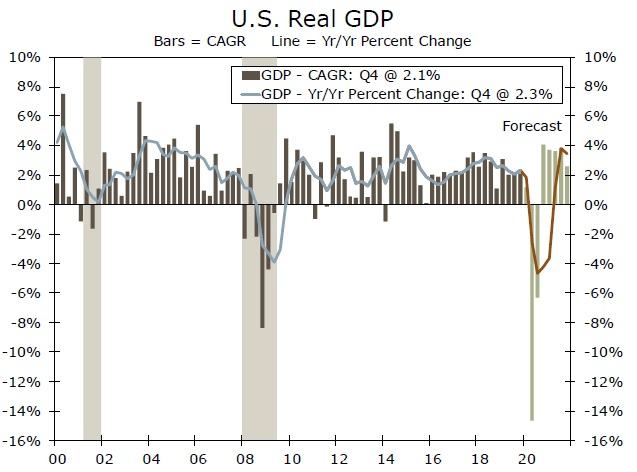 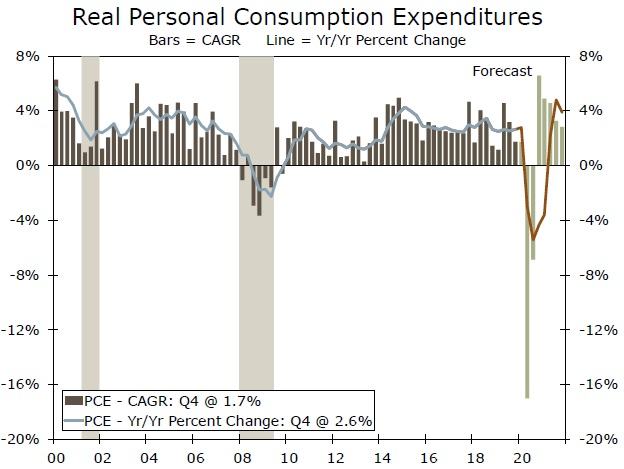 The news in today's data release was the first look at economy-wide profits in Q4-2019. Pre-tax profits rose $53.0 billion, or 2.6% (not annualized). On a year-ago basis, profits were up 2.2%. For the year as a whole, however, profit growth was flat and the outlook looks more dire.

Profits are set for a one-two punch from COIVD-19. First, there is the potential global supply chain disruptions. Supply chain bottlenecks from extended factory closures and factories not operating at full capacity will weigh on U.S. production, which would depress corporate profit growth this year. Manufacturing profits declined 4% in 2019, as the sector was already under pressure amid trade policy uncertainty. The sector is set to slow further this year and accounts for 20% of U.S. corporate profits.

Then, for products that can make it to the shelves, there is the closure of stores and shelter-in-place restrictions, which will limit U.S. consumer spending, and thereby corporate profitability. Overall, nonfinancial profits were up 1.3% last year. Some industries may be due for some lift in the first quarter (e.g. nondurable goods, information) as consumers' stockpile, but just as real GDP is about to nosedive, so too will corporate profits (bottom chart). All told, we expect corporate profits to decline roughly 7% this year, which is consistent with a peak-to-trough decline of nearly 12%. 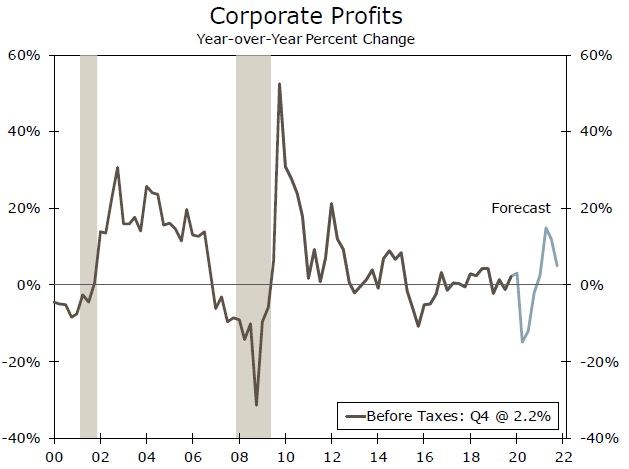