The pound is showing limited movement in the Wednesday session. In European trade, GBP/USD is trading at 1.4132, down 0.07%. On the fundamental front, US CPI is projected to come in at 3.6% year-on-year in April, up from 2.6% in March. If CPI outperforms, it could raise expectations that the Fed will move sooner to tighten policy.

UK GDP numbers were a mixed bag, as the economy contracted in the first quarter of 2o21. At the same time, The monthly GDP outperformed.

Analysts had expected the British economy to shrink in Q1, and this was the case, with a GDP read of -1.5%. This was slightly better than the forecast of -1.7%, but pointed to a bruising quarter, as the economy was hampered by lockdown restrictions and trade disruptions due to Brexit, such as the buildup of containers in British ports.

The GDP report was also a “cup half full”, as March GDP was stronger than expected, with a healthy gain of 2.1%. This easily beat the estimate of 1.3% and was well up from the February reading of 0.4%. The March expansion reflected businesses preparing for the first stage of the reopening of the economy, which occurred in early April.

There was more positive news from the manufacturing front, as Manufacturing Production rose 2.1% in March, up from 1.3% and easily beating the forecast of 1.0%.

The British economy is still some 8.7% smaller than prior to the Covid pandemic, but the March reading is an indication that the economy is headed in the right direction, and that bodes well for the British pound, which has been on an impressive streak. GPB/USD is up 1.13% this week and has soared in May, with gains of 2.34%.

The pound avoided a potential pitfall early in the week, as the results of the Scottish election showed that the pro-independence SNP failed to garner a majority in parliament. This means that investors can count on political stability, and the pound responded with gains of close to one per cent on Monday. 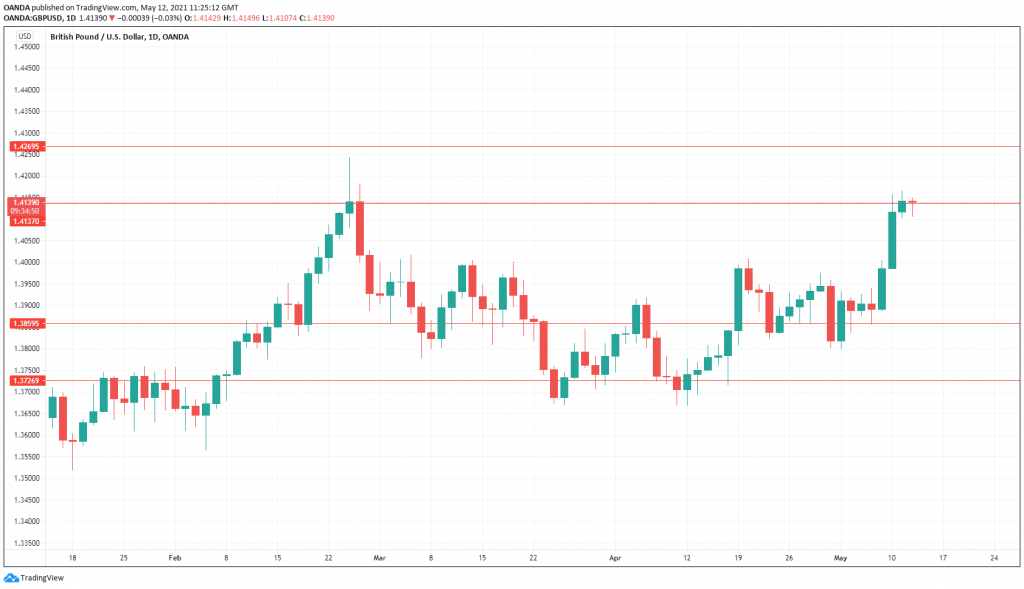