After months of discussion, today is set to be the day where “phase one” of a US/China trade agreement is signed. Effectively this draws a line under any further escalation in the trade dispute between the world’s two superpower economies. However, US Treasury Secretary Steve Mnuchin notes that existing tariffs will remain in force at least until the signing of a second phase of the agreement. There is much for both sides to work on. There is a fear therefore that markets have priced in all the good news on this part of the deal and that in the coming days there is a “buy on rumour, sell on fact” reaction as the champagne loses its fizz. What is interesting is that whilst equity markets continue on their liquidity-driven (from the Fed’s repo splurge) rally, Treasury yields have not met the move with similar gusto. This may weigh on the dollar in the coming days. Despite this supposed risk rally of phase one, the US 10 year yield is back around 1.80% this morning and a one week low. This morning we see a slight risk negative and dollar negative move through major markets. This is allowing a yen and gold rebound, whilst equities are slipping. Can it be that “buy on rumour, sell on fact” is already setting in?

Wall Street closed slightly lower with the S&P 500 -0.2% at 3283 with the US futures -0.1%. Asian markets have met this with a mildly negative session too (Nikkei -0.5%, Shanghai Composite -0.5%). European indices are also mildly lower in early moves today with the FTSE futures and DAX futures both -0.1%. In forex, there is little real direction of conviction, but there is a slight rebound on GBP again, whilst JPY is also being supported. In commodities, gold and silver are ticking higher, whilst oil is slightly weaker.

The first key event on the economic calendar today is UK inflation at 0930GMT. UK CPI for December is expected to see little change, with headline CPI remaining at +1.5% (+1.5% in November) and core CPI remaining at +1.7% (+1.7% in November). Eurozone Industrial Production is expected to grow by +0.3% in the month of November which would see the year on year decline improve to -1.1% (from -2.2% in October). US headline PPI at 1330GMT is expected to improve marginally to +1.3% (from +1.1% in November) with core PPI remaining at +1.3% (+1.3% in October). The New York Fed’s Empire State Manufacturing is at 1330GMT and is expected to improve marginally to +4.1 in January (from +3.5 in December). The EIA’s Crude Oil Inventories are expected to return to drawdown with -0.8m barrels (after a build of +1.1m barrels last week). Also, keep an eye out for the Fed’s Beige Book at 1900GMT to highlight the economic outlook.

Chart of the Day – EUR/CHF

We continue to believe that the euro is set up to perform better in 2020, however crossed against the “currency manipulator” that is the Swiss franc, the single currency remains under pressure and has now seen a key breakdown. Throughout the latter months of 2019, EUR/CHF was holding up well above a key support at 1.0810 but in recent weeks a trend lower has pressured this support. Having been creaking in the past few days, yesterday’s decisive negative candle yesterday has now significantly breached the support. This has taken EUR/CHF to its lowest level since April 2017. A clutch of negatively configured momentum indicators have met the downside break, however, is it a move to chase? The RSI is at its lowest since August 2018 and looks stretched. With the market picking up this morning, a technical rally could well set in near term. However, there is a key band of overhead supply now between 1.0810/1.0860 whilst the resistance of a four week downtrend comes in at 1.0825 today. Look to use a failing technical rally which helps to renew downside potential. It would need a move above 1.0905 to engage a serious recovery. 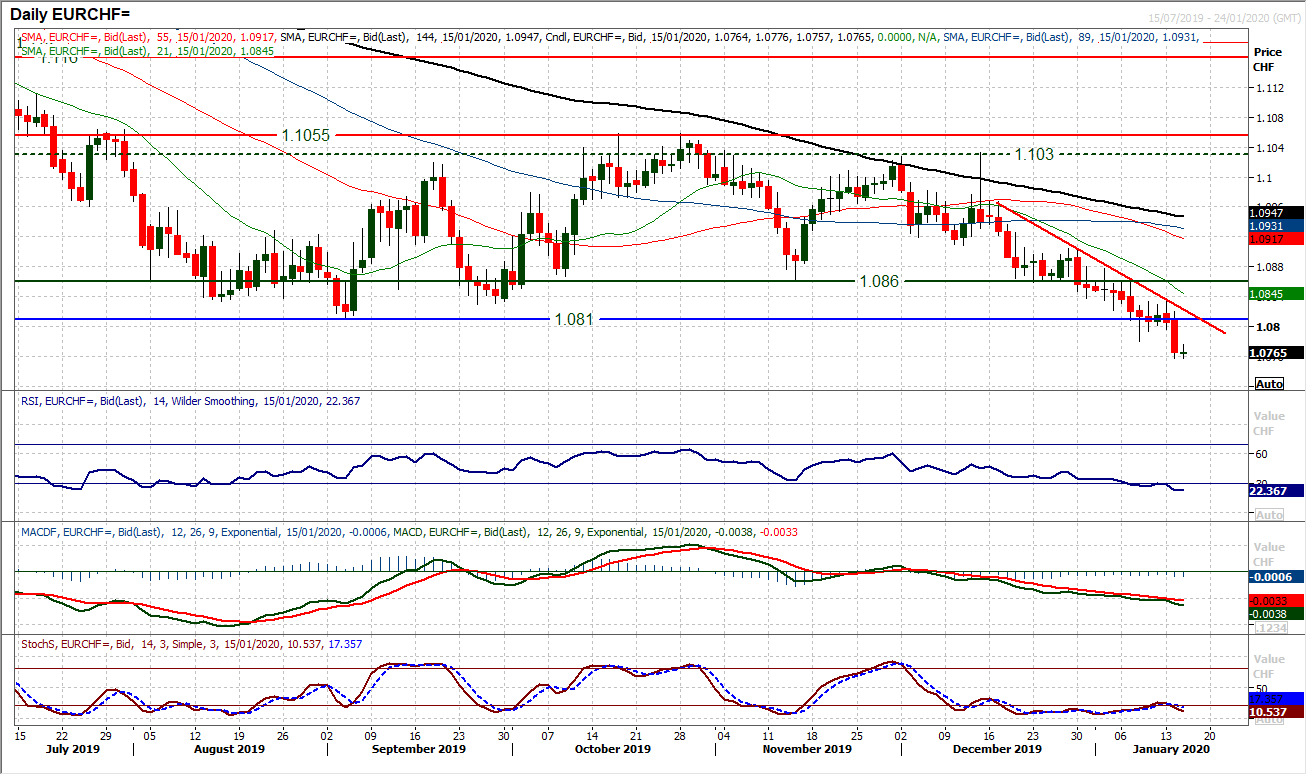 The bulls may have been slightly disappointed in only a mild gain on the day yesterday, however, it could be just the start of a recovery. For more than a week the oil price has been posting a succession of bearish candles, but this sequence has now been broken. It is coming at an important moment too. The support of a three month uptrend is at $58.25 today, but there is also a medium term pivot band support area between $57.50/$57.85 which is now building again. This is coming just as the MACD lines have unwound back to a level around 40 where the bulls have tended to regain control again in recent months. This is a key crossroads now for the market. So whilst the bulls have tentatively looked to build support, the renewed recovery is by no means certain. The hourly chart shows there is a near term pivot at $58.75 as initial resistance, but it would need a move back above $60.00 to really suggest traction in a recovery. Below $57.50 opens $55.00. 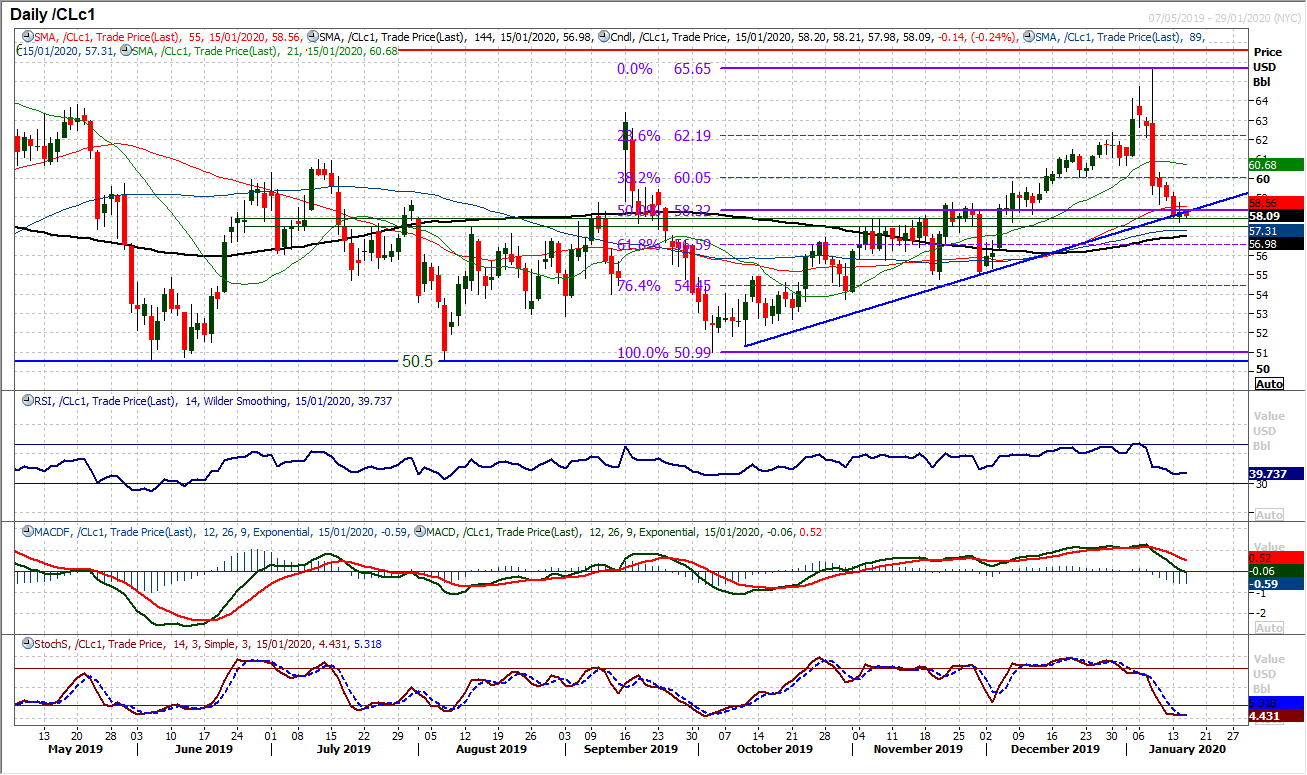 There is a slightly uncertain feel developing to the Dow bull run right now. The outright negative implications of last Friday’s bearish engulfing candle may have been aborted by yesterday’s move to an intraday all time high (peaking at 29,054) but another very tentative close to the session. Momentum indicators have also lost some of their positive intent too, with the MACD lines flattening off and RSI hovering under 70. To be fair though, it is probably still just the bulls having a pause for breath as all of the main positive arguments are still firmly intact, and certainly on a medium term basis. A five week uptrend comes in at 28,670 today, flanked closely by a three month uptrend at 28,350. All moving averages are rising in bullish sequence and any corrective move that may set in would still simply be seen as a bull market correction. Friday’s low at 28,789 is initial support, with the first real support is at 28,376. 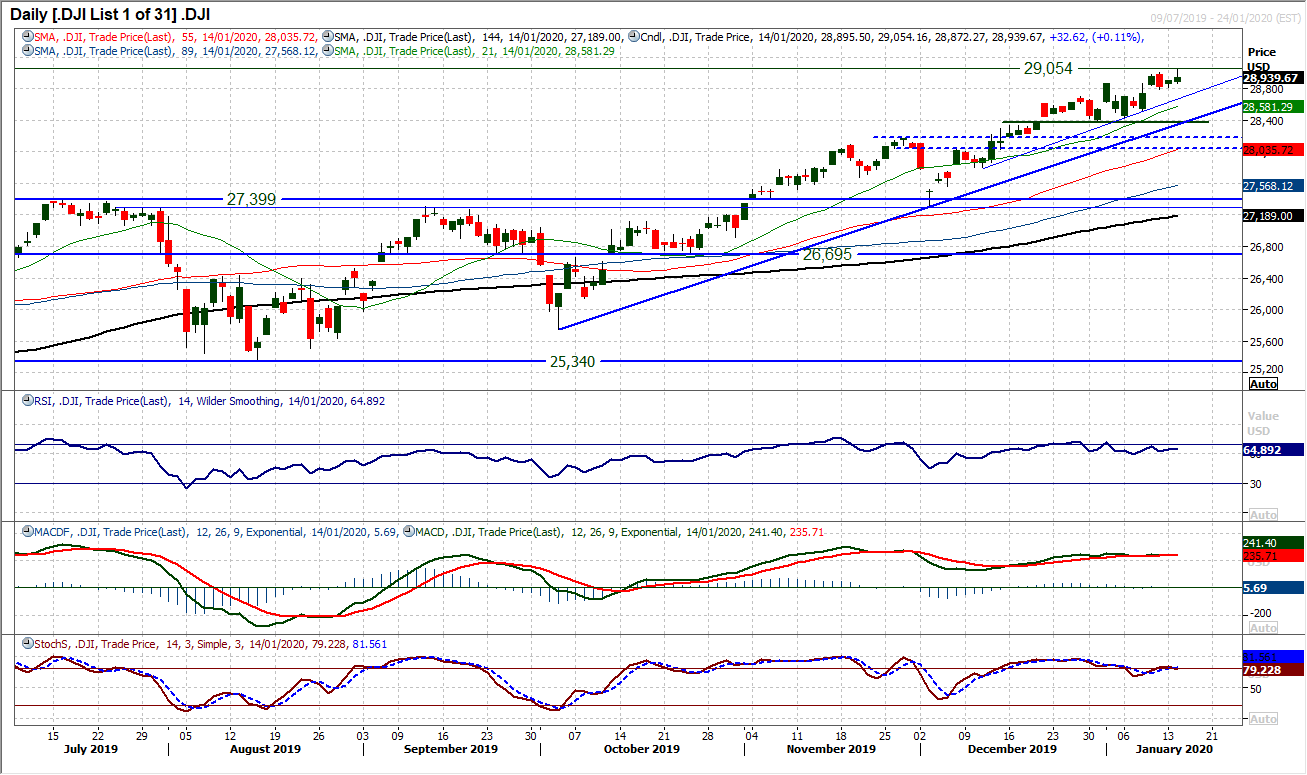 The USD/JPY pair rose further during the American session amid an improvement in market sentiment. It printed a fresh daily high at 109.19.