US October employment data is due this Friday, after plenty of first-tier events that so far represented nothing in terms of price action when it comes to the EUR/USD pair. The FOMC monetary policy meeting that took place earlier this week was a non-event, providing no changes to what the market now foresees: a rate hike in December and at least one more for 2018. Policymakers referred to a "solid" economy and acknowledged inflation remains soft. Could then the Nonfarm Payroll report be a game changer? Clearly not, because the problem is and has always been inflation, not employment.

The Dollar is strong and near multi-month highs against most of its major rivals, despite the previous Nonfarm Payroll report was disastrous, with the economy losing 33,000 job's position in September. The hurricanes that hit the country during the month lessened the effect of the awful number in the FX board. That said, the immediate reaction to the report is no longer a trend-setter as it was many years ago.

Still, the report will bring some intraday action, which is expected to be more relevant if it is Dollar's positive, as it will be aligned with market's sentiment/the dominant trend.

The US economy is expected to have added 312K new jobs in October, a stark contrast to the previously mentioned decline. The unemployment rate is seen unchanged at 4.2%, a multi-decade low, while average hourly earnings, also a positive surprise last month that partially offset the negative headline, are seen growing by 0.3% monthly basis, against previous 0.5%. Wages grew by 2.9% yearly basis, close to the 3-4% range that the Fed sees as "healthy".

The ADP survey released last Wednesday suggests that the upcoming numbers will be strong, as according to it, the private sector added 235K new jobs in October, largely above a previous revised to 110K or the expected 200K.

Anyway, a reading above the expected 312K seems unlikely as it's too high, but anything above 240K should be considered dollar positive. Wages, as usual, will be key as a decline there will probably hit the greenback, as wages are correlated to consumption and therefore inflation.

Ever since the week started, the pair has been confined to a tight range below the 38.2% retracement of the latest daily decline, now challenging it as Wall Street plunges, after the GOP unveiled its tax-reform plan. The bill is mostly positive for equities, as seems the corporate rate will be chopped straight to 20% with no phases in between. The decline seems mostly due to the market not believing it could happen. 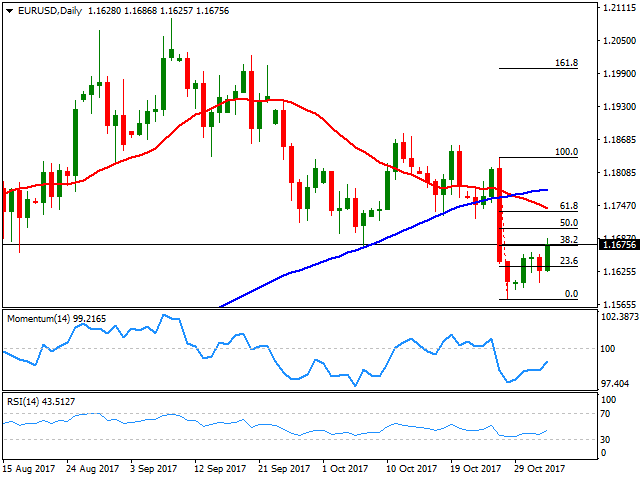 Anyway, from current levels, the pair has a relevant resistance around 1.1740, the 61.8% retracement of the latest decline. That's where the pair has its 20 DMA on the daily chart. Indicators in the mentioned chart have recovered from oversold levels, but remain within negative territory, suggesting the pair could extend its current upward corrective movement. Beyond the mentioned level, the recovery can extend up to the 1.1800 figure, ahead of last Thursday's high of 1.1836. The risk will turn towards the downside on a break below the 1.1600 figure, while the pair will gain bearish strength on a break below 1.1575, Friday and October's low, leaving doors open for a test of 1.1460 next week.

EUR/USD lost its bullish momentum and declined to the 0.9600 area during the American trading hours on Tuesday. The negative shift witnessed in risk sentiment seems to be helping the dollar gather strength and causing the pair to stay on the backfoot.

GBP/USD erased a portion of its daily gains in the second half of the day on Tuesday and fell toward 1.0750. The dollar capitalizes on upbeat consumer confidence data and the risk-averse market environment further weighs on the pair.

Gold edges lower toward $1,630 amid rising US yields

After having climbed above $1,640 earlier in the day, gold reversed its direction and dropped toward $1,630. The benchmark 10-year US Treasury bond yield turned positive on the day near 4% after upbeat US data, not allowing XAU/USD to preserve its bullish momentum.