The US will release October employment data this Friday, and signs ahead of it are not good. The Nonfarm Payroll report is expected to show that the country has added 85K new jobs in the month, below the previous  136K. The unemployment rate is seen ticking higher from 3.5% to 3.6%, while average hourly earnings are seen up by 0.3% monthly basis and by 3.o% when compared to a year earlier.

The market anticipates a weak outcome as correlated data has missed the market’s expectations.  According to the latest release, Continuing Jobless Claims are up by 1.69M, while the Challenger Job Cuts showed that US-based employers announced job cuts of 50,275 in October, 20.97% higher than the 41,557 announced in the previous month.

The ADP survey on private employment creation, came in slightly above expected, with 125K new positions added, although the September figure was downwardly revised to 93K.

Given that the Nonfarm Payroll report will be released in the first trading day of the month, no hints are coming from ISM, which will release the official Manufacturing PMI after the employment report.

Despite being priced in, a worse-than-expected report would likely have a larger impact on the dollar’s price than an encouraging one, as speculative interest has been affected by the latest Fed’s monetary policy announcement. Chief Powell words, hinting a pause in rate cuts but also suggesting that a rate hike is far away in the horizon, have hurt dollar’s bulls which are still licking their wounds.

The greenback’s decline will be more notable against safe-haven rivals such as the yen and gold, and commodity-linked currencies, particularly if equities extend their slumps. The Pound moves mostly on Brexit-related headlines, and GBP/USD reaction to the report is usually meaningless.

The EUR/USD pair is trading at the upper end of its October range, and while losing ground this Thursday, far from signalling a steeper decline ahead. Daily basis, the pair is far above a bullish 20 DMA, also above a bearish 100 DMA, while technical indicators lose strength upward but remain within positive levels. 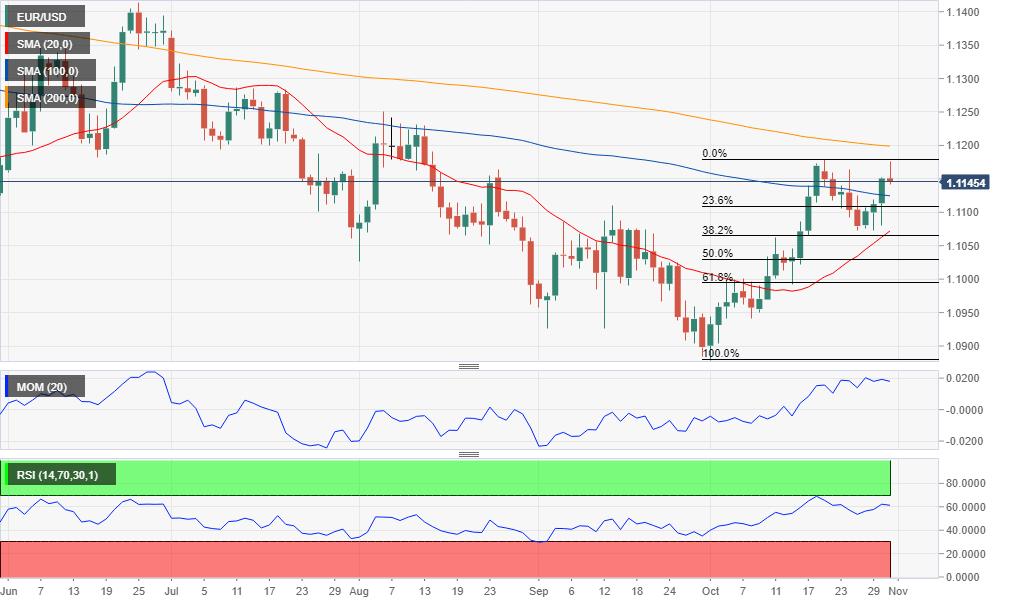