The monthly Non Farm Payrolls report in the United States never lacks for drama, but the Federal Reserve’s incipient bond taper has made the expectations around the August jobs numbers on Friday even more intense than usual.

At the Jackson Hole symposium last week, Fed Chair Jerome Powell said that a reduction of the bank’s $120 billion in monthly bond purchases was likely by the end of the year. The Fed has been using this bond program to keep Treasury yields near their historical lows for more than 18 months.

Mr. Powell said that the US has finally reached a point where the emergency measures enacted in the early days of the pandemic are no longer crucial to the success of the economy.

While Mr. Powell’s remarks and the previous minutes of the July 27-28 Federal Open Market Committee (FOMC) made it clear that a majority of Fed governors favor a tapering of the bond program, neither the minutes or Mr Powell provided clues to the timing.

Of the Fed’s two chief concerns, inflation and employment Mr. Powell  admitted that inflation has more than met the bank's “sufficient further progress” criteria. Core PCE has averaged 2.6% through July and is likely to be over 3% in each of the remaining five months of the year.

However, on employment the Fed chair said that there was much ground to cover to reach maximum employment. Some six million people remain unemployed from the lockdown job losses last year according to Nonfarm Payroll accounting.

Nonfarm Payroll averaged 940,500 in June and July, the best two months since August and September last year at the end of the initial job recovery.

The unemployment rate at 5.4% in July is down 3% on the year from last August and 0.8% since February.

Initial Jobless Claims have been declining for most of the year. The four-week moving average was 366,500 in the August 20 week, the lowest of the pandemic and down from 403,000 three months ago. 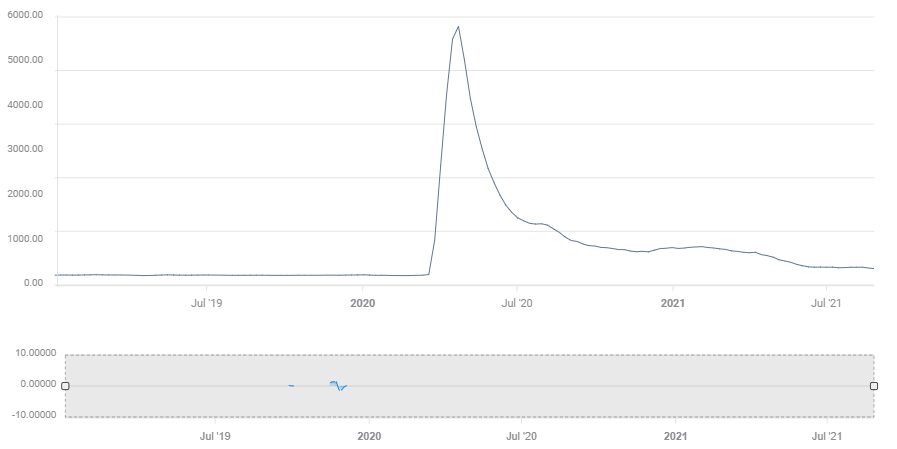 The Job Openings and Labor Turnover survey (JOLTS) which catalogues the number of unfilled positions in the country, has set all-time records for the last four months, culminating in 10.073 million in June. Prior to this run the highest number of jobs ever offered had been 7.574 million in November 2019.

Employment PMI figures have been good all year.

The service sector  registered 53.8 in July and has averaged 54.6 this year, well above the 50 division between expansion and contraction. It is expected to drop to 51.5  when August is reported on September 3. Manufacturing employment was 52.9 in July, averaging 53.6 for the year and is forecast to be 51.4 in August when issued on September 1.

Despite all the good employment numbers, for the markets and the Fed it is the NFP numbers that matter. That was true in the lockdown collapse, and through the worst of the pandemic last year. It remains so now.

The release date of this hiring information from Automatic Data Processing (ADP), the largest US payroll preparation firm, two days before the NFP figures, is the main reason for its precursor status. The month to month correlation is generally weak.

Market reactions to NFP will be a straight-through process on whether the result improves the chances for a taper announcement at the September FOMC meeting.

The impact will be linear. The better the payroll number, especially if it is over 900,000, the stronger the gain in Treasury yields and dollar response. Equities may be equivocal. An active job market means a stronger overall economy and better company profits,  but it also indicates that the Fed may be willing to tolerate the progressively higher rates inherent in ending the bond purchases.

Replacing the jobs lost in last year's lockdowns is the Fed’s main concern. Chair Powell has voiced and elaborated on this countless times during the pandemic.

Given the emphasis the Fed has placed on the labor market, the question is what level of payrolls will convince the governors that job creation remains strong despite covid, inflation and the depressing debacle in Afghanistan.

In order for the Fed to consider announcing a taper date at the September FOMC, NFP will probably have to at least match the two-month average, coming in 200,000 above the consensus forecast.

The governors and especially Chair Powell, might find it hard to justify the taper in the face of falling job creation and a still active pandemic.

One aspect of the taper has not been much remarked.  Even if the Fed announces the taper will begin in October, the schedule will not be set on automatic and allowed to run out until the purchases are ended. It is a certainty that the Fed will retain discretion over the amount and continuation of the taper until the very end.

A better-than-expected August NFP report does not mean that the Fed will announce a taper in September, but a miss on the forecast surely means they will not.