The current week is expected to end with a high note, but not because of the release of the monthly US employment report, but because of the US implementation of tariffs on imports from key trade partners, particularly to China. The world's largest economy is set to impose tariffs on $34 billion worth of goods from China this Friday, while Beijing is expected to fighting back with its own $34 billion of tariffs on American goods. Chinese authorities have largely stated that, while they won't be the ones triggering the first shot in this trade war, for sure they won't sit back. Meanwhile, the US announced late June that is also planning to increase tariffs on cars from the EU, with European officers announcing Wednesday that they are considering talks on a tariff-cutting deal between the world's largest car exporters, to prevent an escalation in the trade war. Even central banks have expressed concerns about the risk that protectionism poses to economic growth.

On the other hand, and given the solid health of the US employment sector, the Nonfarm Payroll report to be out this Friday has been losing the capacity to rock the boat. Despite still relevant, the release of US employment data is no longer what it was, triggering limited market reactions unless divergences between the outcome and the expected figures is huge.

The ADP report released this Thursday showed that the private sector added 177K new jobs in June, below the 190K expected, while job cuts rose 18%, from 31,517 in May to 37,202 in June, according to the official release. Also, jobless claims rose to 231K for the week ended June 30, well above the 225K expected, also above an upwardly revised 228K in the previous week. Pretty discouraging news that anticipate a soft Nonfarm Payroll report.

Market players are expecting the US economy to have added 195K new jobs in June, the unemployment rate is seen at record lows of 3.8%, while as usual, wages are barely expected to show signs of life, up monthly basis 0.3% and by 2.8% YoY.

Anyway, the report could have a limited influence on currency pairs, particularly if readings are in-line with market's forecast, with the focus shifting then to risk-sentiment correlated to the trade war.

The EUR/USD pair trades around 1.1700 ahead of the event, with one event-risk pending ahead of the NFP release, the Minutes from the latest FOMC Meeting. Nevertheless, the pair holds at the upper end of its recent range, pressuring a major Fibonacci resistance at 1.1720 with a mild bullish tone in the daily chart, as the price has settled above its 20 DMA, but remains far below the larger ones, with the 100 DMA crossing below the 200 MA in the 1.19/1.20 region. Technical indicators in the mentioned chart are gaining some upward traction after a period of consolidation, leaning the scale toward the upside without confirming it.

An interesting amount of stop are probably gathered above the mentioned Fibonacci resistance, and if triggered, could lead to an advance first toward the 1.1770 region, while beyond this last, up to 1.1855, the next Fibonacci resistance and where the pair topped early June after the ECB and Fed's monetary policy announcements. A key support is the 1.1590/1.1620 region, as below it, the pair has scope to retest the yearly lows in the 1.1500 region. 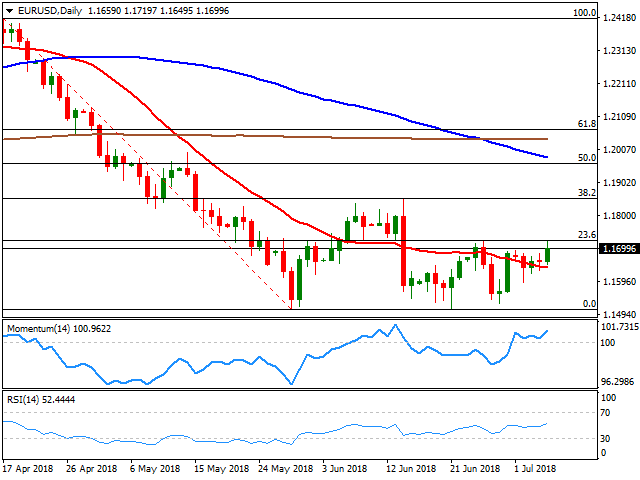