New Zealand will release this Thursday it´s Gross Domestic Product for the second quarter of the year, a couple of hours after the Fed’s monetary policy decision. The US Central Bank will likely rock the boat ahead of the event and seems likely that sentiment toward the greenback post-Powell would overshadow the effect of New Zealand Q2 GDP on NZD/USD. Furthermore, Australia will release its August employment figures later in the day, another factor that would weigh on the pair’s direction.

Growth in New Zealand is foreseen up by 0.4%, weaker than the previous quarter 0.6% advance. When compared to a year earlier, growth is expected at 2.0% from 2.5% previously.

Back In August, when the RBNZ had its meeting, Governor Adrian Orr & Co. cut rates by 50 basis points. Later that month in a press conference, Orr said “we’re pleased with where we are,” as the cut allowed policymakers to get ahead of any economic slowdown. That said, GDP figures at the levels forecasted, won’t be enough to twist Orr’s hand. The central bank will meet next week, on September 25, and is largely anticipated to keep rates on hold at 1.0%.

There’s a limited chance that the US Federal Reserve will do against the market’s forecast, and given the ongoing global economic slowdown and recent tensions in the Middle East, speculative interest will need little to buy the greenback.

The NZD/USD pair is trading above 0.6300 ahead of the events, although not far from a multi-year low set earlier this month at 0.6268. The weekly chart shows that the 20 DMA heads south at around 0.6365 providing a relevant resistance ahead of the above-mentioned events. The weekly low at 0.6320 is the immediate support, ahead of the mentioned 0.6268. The Momentum indicator in the mentioned chart heads lower within neutral levels and the RSI currently a around 36, skewing the risk toward the downside without confirming it. 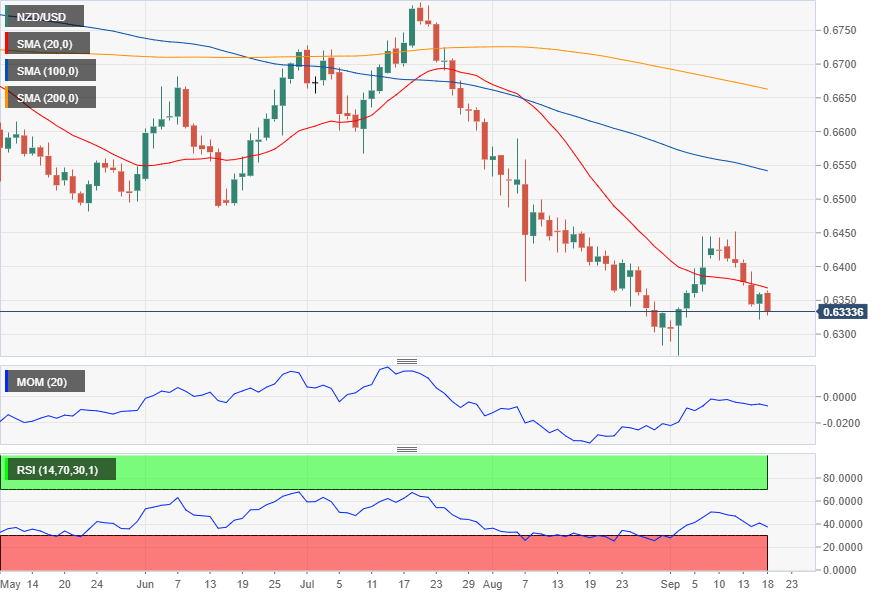