Nevada holds the third nominating contest in the Democratic presidential primary on Saturday, February 22. Bernie Sanders and Joe Biden have led in Nevada polling, but those numbers may shift somewhat following Sanders' victory in New Hampshire last night. Prior to that, Pete Buttigieg apparently edged out Sanders in Iowa.

Nevada was hit extremely hard by the housing bust and ensuing recession, and did not recover all the jobs lost until the end of 2015. Home prices are still below their 2006 peak.

The Silver State is now growing rapidly, however, and has added 321,000 jobs since 2010. Its economy has diversified into logistics & distribution, healthcare, various tech fields and advanced manufacturing.

The leisure & hospitality sector is still very important to Nevada, although the focus has shifted towards entertainment rather than solely gambling. The addition of NHL hockey and NFL football has augmented the abundance of entertainment options, as has the city's new minor league ballpark.

Low taxes and business-friendly regulations have boosted the professional & business services and tech sectors, which have benefitted from an affordability migration out of California.

The influx of businesses has spurred rapid population growth. The latest data show Nevada's population grew 1.8% in 2019, the second strongest gain of any state. Nevada is attracting jobseekers as well as retirees.

Nevada is Growing Fast Again, but Better This Time

Nevada was hit extremely hard by the housing bust and ensuing recession, and did not recover all the jobs lost until the end of 2015, well after the nation as a whole did in January 2014 (Figure 1). The recovery took a while to get under way due to the severity of the collapse and the overreliance on cyclical industries such as gaming and homebuilding, but since 2014 payrolls have consistently risen 3% or more annually. Nevada has added 321,000 jobs since 2010, and, more importantly, employment growth has been across a broader array of industries (Figure 3). 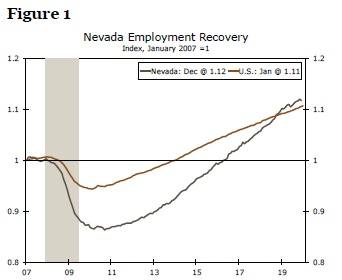 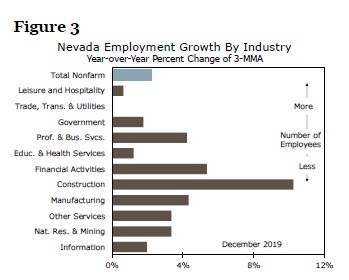 GBP/USD stays mildly negative around 1.30 while heading into the London open on Tuesday. UK’s Brexit negotiator shares the same view as PM Boris Johnson, increases the risks of hard departure. UK employment statistics will be the key to clarify on the BOE’s bearish bias. 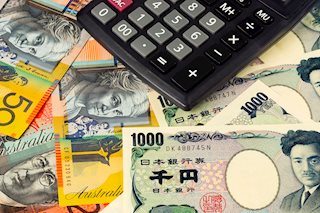 Gold prices take the bids to $1,586.50, +0.35%, during the pre-European session on Tuesday. The yellow metal recently broke a downward sloping trend line stretched from January 08. Early-month top on the buyer’s radar.