S&P 500 moved marginally higher in spite of its short-term very extended position, powered by liquidity and almost defying the odds. Credit markets were hinting at deterioration, the yen carry trade I talked a week ago has run into a brick wall as viewed by the USD/JPY exchange rate reversal – but stocks didn‘t listen, and their market breadth indicators are actually quite healthy.

We‘re still in the rare constellation I discussed two days ago – Treasury yield moves are exerting no real pressure either on value stocks or technology including heavyweights, which are picking up the tech upswing slack. Microrotations still pointing higher are the name of the game, on the wave of infrastructure bill expectations as well.

Still, the risk-reward ratio for the bulls is at unsavory levels in the very short run even as the longer time frame perspectives remain really bright. Consider these points made yesterday:

(…) we have seen quite a record number (around 95%) of stocks trading above their 200- day moving averages, which is similar to the setup right after the post-dotcom bubble bear market 2002/3 lows, or 1-2 years after the bull market run off the Mar 2009 lows. Hard to say which one is more hated, but I see the run from Mar 2020 generational low as the gold medal winner, especially given the denial accompanying it since.

Gold kept its run above $1,740 intact and regardless of the daily weakness in the miners – should that one be repeated more consistently, it would become worrying for the bulls. Looking though again at the USD/JPY chart, I‘m increasingly optimistic that the currents working against the king of metals, have turned. That‘s because whenever yen, the currency perceived by the market place as a safe haven one, strengthens, gold tends to follow its cue – and that‘s where we are now. The precious metals run to the key $1,760s or even better above $1,775 is approaching, and has already sent my open gold position solidly into the black.

The soft patch I cautioned against at the onset of yesterday‘s session, has materialized in the miners, and might be very well over by today‘s closing bell. Yes, I look for mining stocks to reverse yesterday‘s weakness even in the competition for money flows with the S&P 500 holding up gained ground. 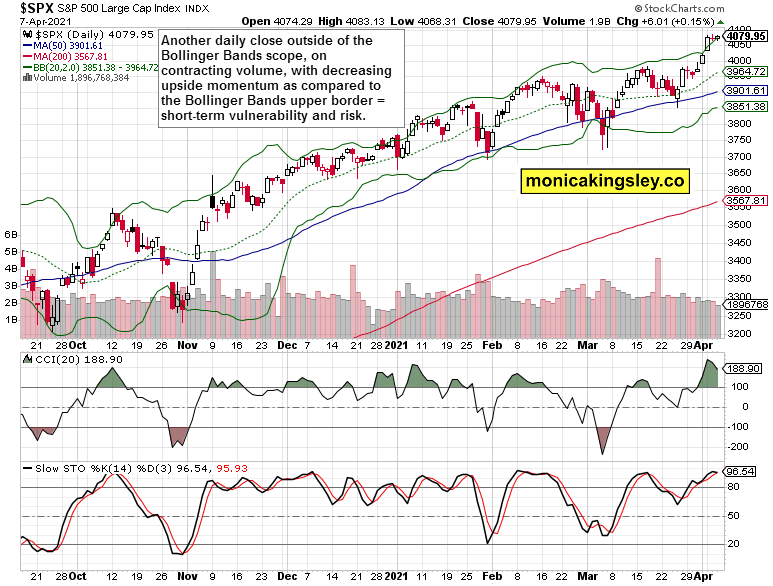 S&P 500 keeps hugging the upper border of Bollinger Bands, and the willingness to trade at these extended levels, has decreased as the volume shows. Long-term investors correctly perceive higher highs as coming, short-term ones view the entry point as unfavorable. 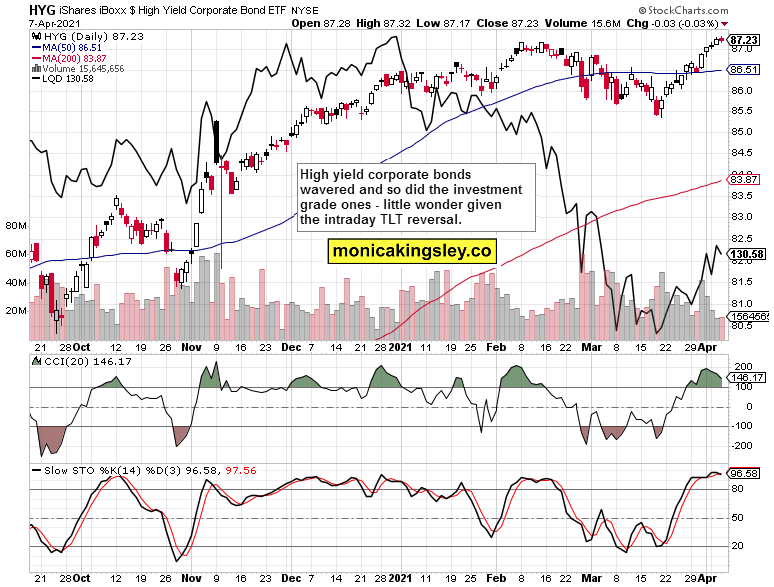 Bond markets wavered yesterday – both corporate and Treasury ones. Yet, note the turn higher in both high yield corporate bonds and investment grade ones, defying TLT – this bodes well for the stock market upswing health.

Focus on technology and value 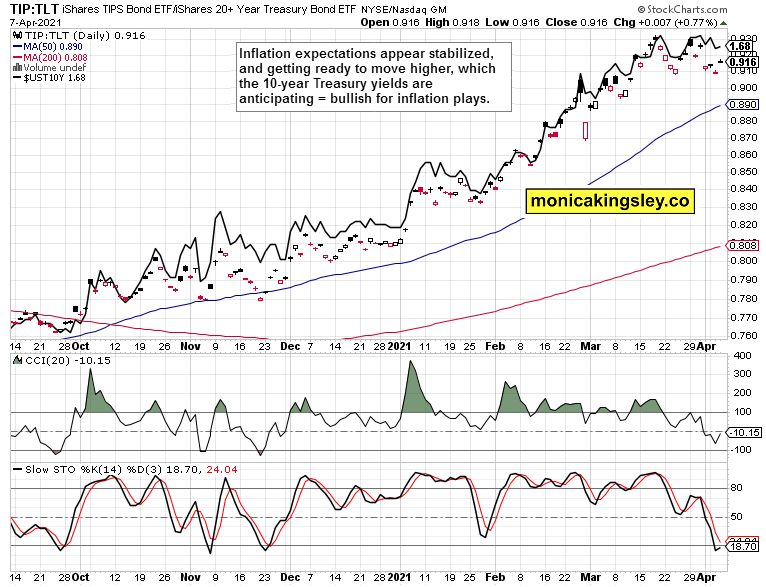 Gold in the spotlight 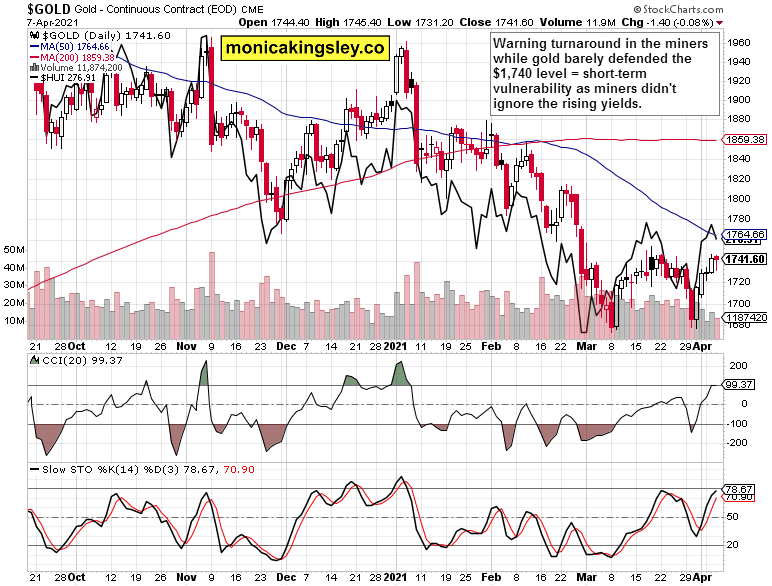 Gold miners compared to gold, don‘t paint a daily picture of strength. Jumping to conclusions on account of the hanging man formation in gold, would be premature though. 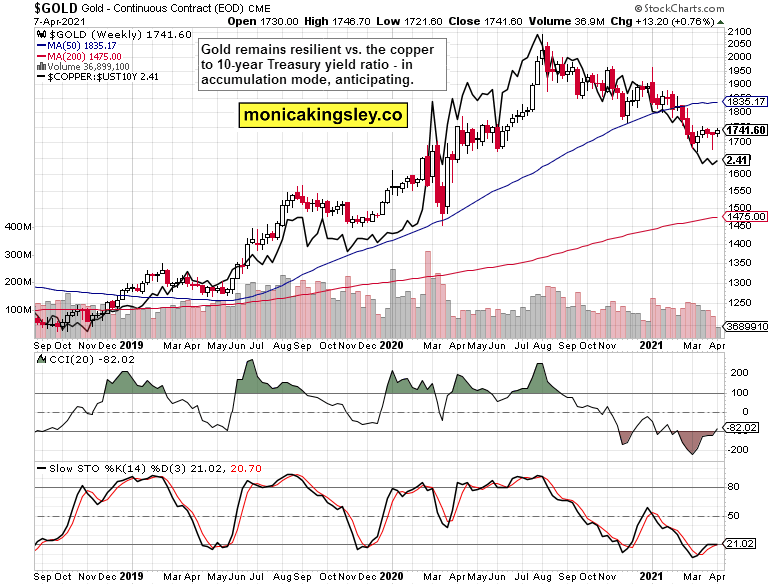 Zooming out, the weekly gold chart with overlaid copper to 10-year Treasury yield, paints a picture of (bullish) turnaround and decoupling. Gold has been clearly attempting to move higher lately, and that will reflect upon the precious metals complex positively as it undergoes its own rotations lifting gold, silver or miners at different stages and magnitudes.

S&P 500 is likely to keep consolidating gained ground, and (shallow) bear raids wouldn‘t be unexpected here – in spite of the strong market breadth. We‘re witnessing VIX trading well below 20 for four sessions in a row while the put/call ratio has risen to the approximate midpoint of its usual range – the bull market is intact, and a breather wouldn‘t be surprising here.

Miners moving higher again is the first step to power gold upwards sustainably again, but the shifting currency winds would help here as strengthening yen would facilitate beating the next major set of resistances above $1,760s.