National rent price data from ApartmentList, OER and CPI data from the BLS, chart by Mish

Our national index fell by 0.8 percent over the course of December, marking the fourth straight month-over-month decline. The timing of this cooldown in the rental market is consistent with the typical seasonal trend, but its magnitude has been notably sharper than what we’ve seen in the past. This suggests that the recent swing to falling rents is reflective of a broader shift in market conditions beyond seasonality alone. As we look ahead to the new year, we expect that 2023 will see bargaining power shift back to renters, and that rent prices this year will grow only modestly, if at all.

Over the course of 2022 as a whole, the national median rent increased by a total of 3.8 percent. This means that last year represented a return to pre-pandemic levels of rent growth, after the astronomical 17.6 percent spike in rents that we saw in 2021. Rent growth in 2022 still ranks as the second fastest year in the history of our estimates (going back to 2017), but it came in just barely ahead of the 3.5 percent rate from 2018.

The cooldown in rent growth is being mirrored by continued easing on the supply side of the market. Our vacancy index now stands at 5.9 percent, after more than a year of gradual increases from a low of 4.1 percent last fall. And in the past four months, this easing of the vacancy rate has picked up steam again, after plateauing a bit over the course of last summer. Today’s vacancy rate still remains slightly below the pre-pandemic norm, but is quickly approaching that benchmark.

The recent slowdown has been geographically widespread. Rents decreased in December in 90 of the nation’s 100 largest cities. New York City saw the nation’s sharpest decline, with prices down by 3 percent month-over-month. And over a longer horizon, we are continuing to see an ongoing cooldown in many of the recently booming Sun Belt markets. Las Vegas, Phoenix, Jacksonville, and Riverside all rank in the top 10 for fastest rent growth since March 2020, but none of these metros has seen rents increase by more than 1 percent over the past twelve months.

From a CPI point of view, I don't believe we will see rents decline significantly, if at all, just yet.

It's not that the ApartmentList data is wrong. Rather, it has to do with what they measure.

Percent Change From Year Ago 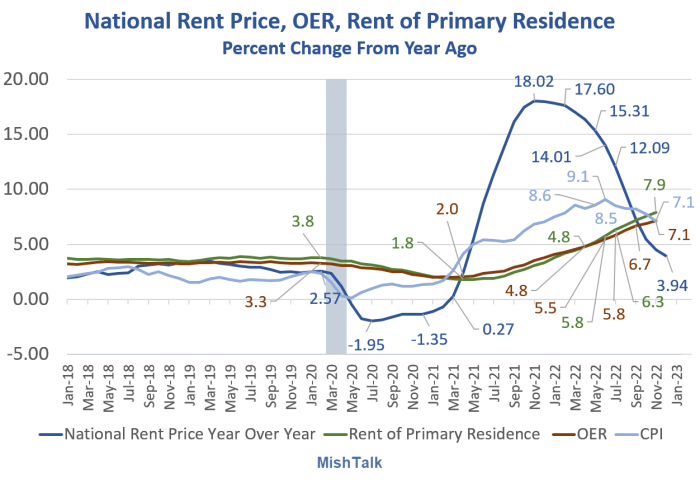 National rent price data from ApartmentList, OER and CPI data from the BLS, chart by Mish

Point number 2 above reflects the huge 18 percent year-over-year-peak vs 7.5 percent for rent of primary residence.

The strong seasonal tendencies of Apartment List are smoothed over by the BLS every year. This year will be no different.

To explain the magnitude change this year, including a record 1 percent decline in November, just look at the massive spikes this year and last that preceded it.

Remember, ApartmentList reflects new leases not renewals of existing leases. With Covid, there was a huge increase in work-at-home and huge demand from people escaping the cities to the suburbs.

Finally, note the time lag between ApartmentList and the CPI.

The above charts provide a needed reality check to those who think rent prices are about to plunge based off Apartment List data.

Last month I commented "I suspect we have strong increases in rent in the CPI data despite the declines of ApartmentList for at least the rest of the year, and if so continuing into 2023." 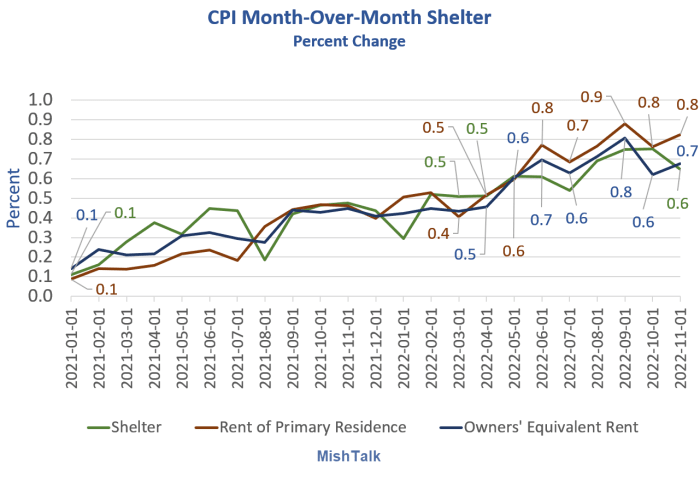 At some point the rate of increases will slow, but don't expect huge declines yet. For now, the trend is still up. 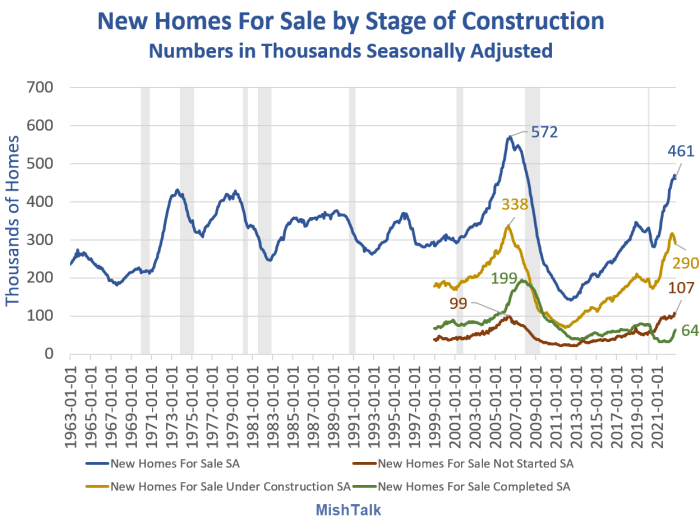 This year there will be a huge number of apartment construction completions. That is more likely to have an impact than the exaggerated seasonal tendencies of ApartmentList.

Again, I don't question their data, one just needs to understand what it means.

For discussion of homes under construction, please see The New Home Sales Report Is Another Negative Revision Swamp in November.

GBP/USD bulls and bears battle it out at the start of week ahead of central banks, Fed, BoE

GBP/USD dropped on Friday due to the fears that the United Kingdom economy's slowdown may prompt the BoE that meets this week to slow down on its rate hike cycle sooner than originally thought. The Cable is trading at 1.2390 and has travelled between a low of 1.2372 and 1.2404 so far.