My weekly last week was entitled “The Market Disagrees with the Fed on Inflation.” I could’ve used the same headline this week. In fact, I think that’s going to be one the main themes of the market for the next several months.

Last Friday’s US nonfarm payrolls showed a shockingly few new jobs created in April – only 226k, far below the 1.0mn the market had expected. Then Tuesday’s Job Offers and Labor Turnover Survey for March shocked in the opposite direction, with a record 8.1mn job openings, far above the 7.5mn people were expecting. So if there’s a record number of job openings, why aren’t more people going back to work? Logic (not research, mind you) says: they must be enjoying sitting home, living on unemployment benefits while watching Netflix. It would mean employers will have to offer substantially higher wages to woo them off their duffs. That’s inflationary. 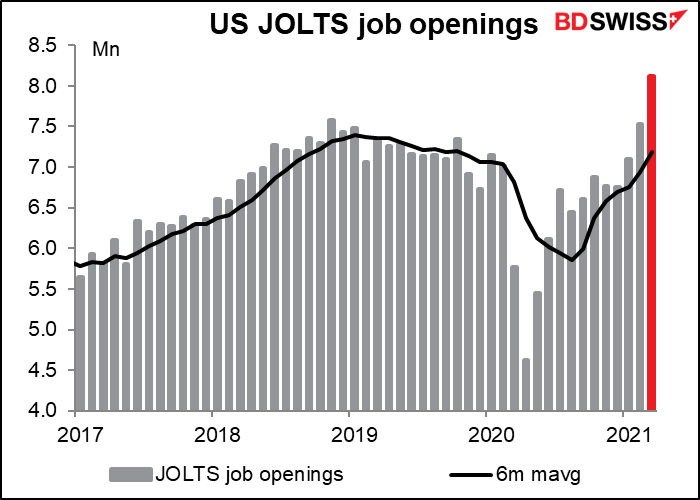 Then…speaking of inflation…Wednesday’s US consumer price index (CPI) came out far above expectations at +4.2% yoy (+3.6% yoy expected, 2.6% previous), the fastest pace of increase since 2008. This was way higher than even the highest estimate on Bloomberg (+3.9% yoy). 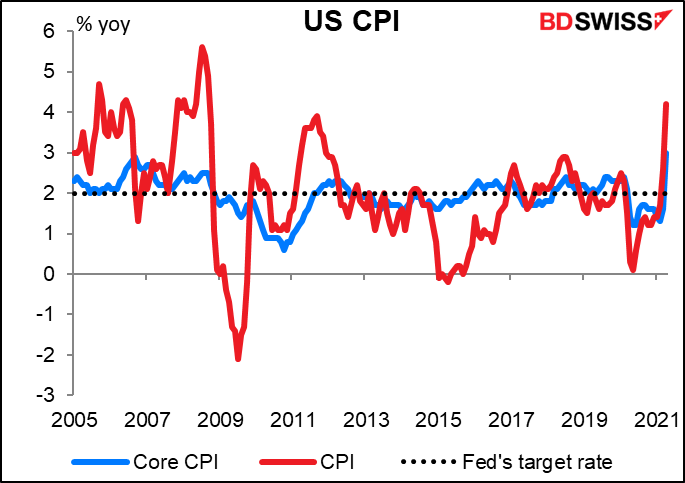 As a result, US breakeven inflation rates moved ever-higher, particularly the 5-year rate, which is where attention is focused nowadays. 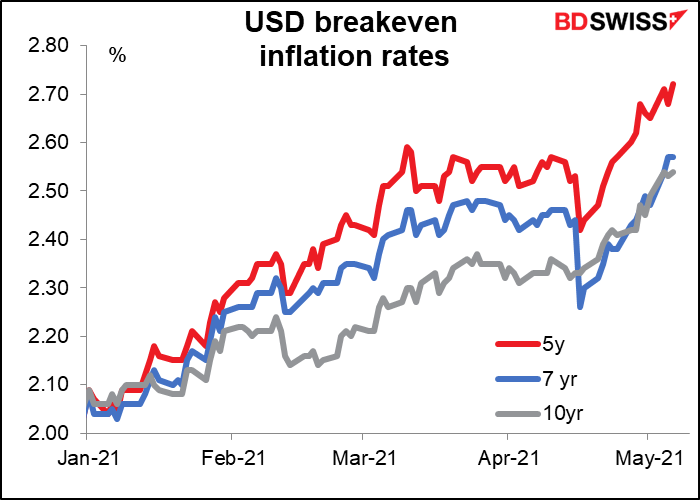 And bond yields moved higher across the curve, except for the two-year, which remains pegged due to Fed expectations.

Those expectations are subject to change, though. With yields moving higher and inflation expectations becoming increasingly un-anchored from 2%, expectations grew that the Fed might have to start normalizing monetary policy earlier than previously expected. 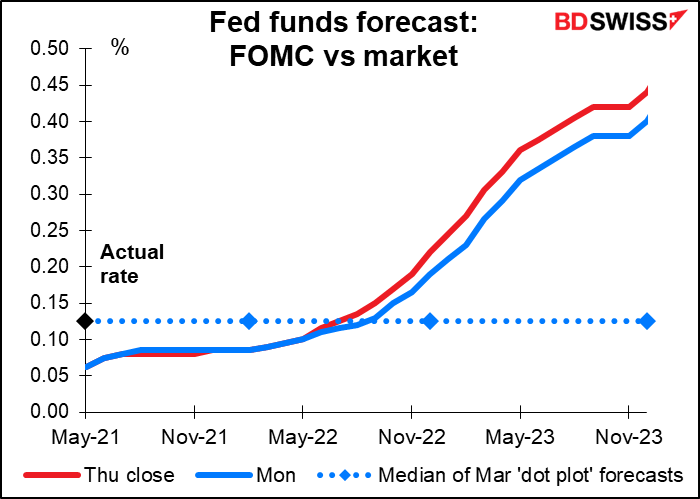 Thursday’s producer price index (PPI) only added fuel to the fire as it exploded higher, leaping to a record +6.2% yoy from an already-high 4.2% (data back to November 2010). 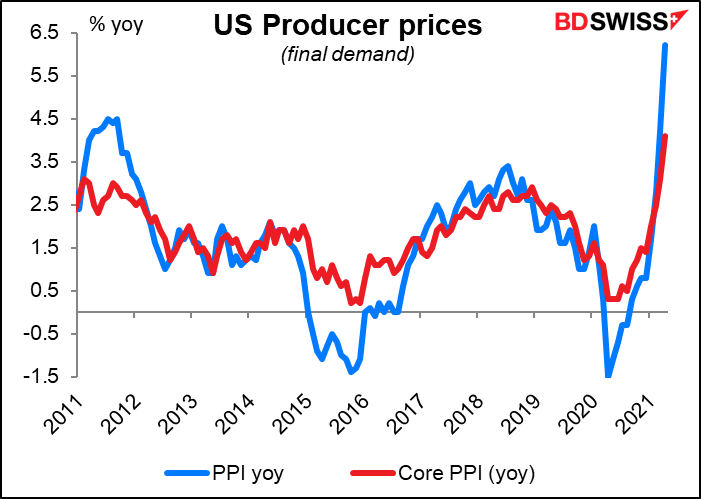 Of course, Fed officials uniformly pushed back on this idea. A few comments

The Fed might be patient enough to wait until September, but will the market? I doubt it. There’s going to be a real struggle for control of the narrative between the Fed and the market for the next few months.

Not that much excitement next week. In Central Bank World, there are no major central bank meetings, just the minutes of the April FOMC meeting and the Reserve Bank of Australia (RBA) May meeting. The US retail sales and industrial production, usually the features of the third week of the month, slipped into the second week this month. As a result, the main feature will probably be the preliminary May purchasing managers’ indices (PMIs) for the major industrial economies, out on Friday. We also get CPI data from the UK, Canada, and Japan, which will be a focus as investors try to gauge whether the rise in inflation in the US is a local or global issue.

We also get retail sales data from China, UK, Australia and Canada, while the UK and Australia release employment data.

Japan has a number of indicators out, including Q1 GDP, trade, machinery orders, and the tertiary sector index, but that often has minimal impact on JPY so you can be forgiven if you decide not to wake up for it.

Purchasing managers’ indices:  The preliminary PMIs are expected to show small declines on the manufacturing side but continued increases for services. PMIs don’t go up indefinitely so a slight decline from the current high levels of manufacturing is to be expected. Further increases on the services side, which is the side that’s been really battered, would be welcome, especially in Germany, where the service-sector PMI is expected to poke its nose back over the 50 line again. So all in all I’d rate these figures good.

Of course, the question nowadays is, good good?  That is, figures suggesting a continued robust expansion could be taken to be further confirmation of the “demand-pull” inflation story, which might be seen as negative for the markets. 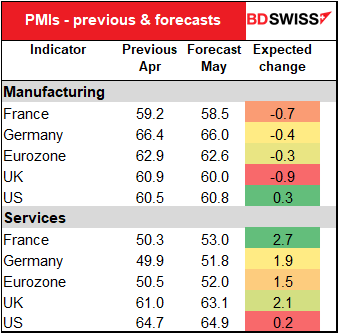 Over the last three months, most of the major countries have migrated into the “accelerating expansion” quadrant with regards to both manufacturing and services, indicating that the global economy is on the rebound. 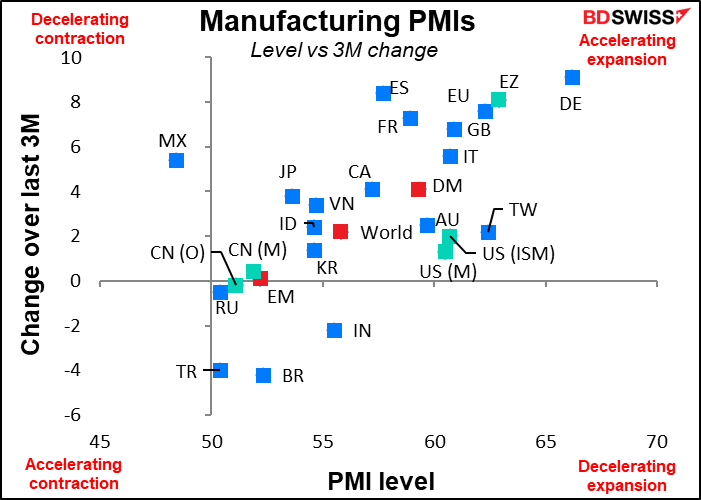 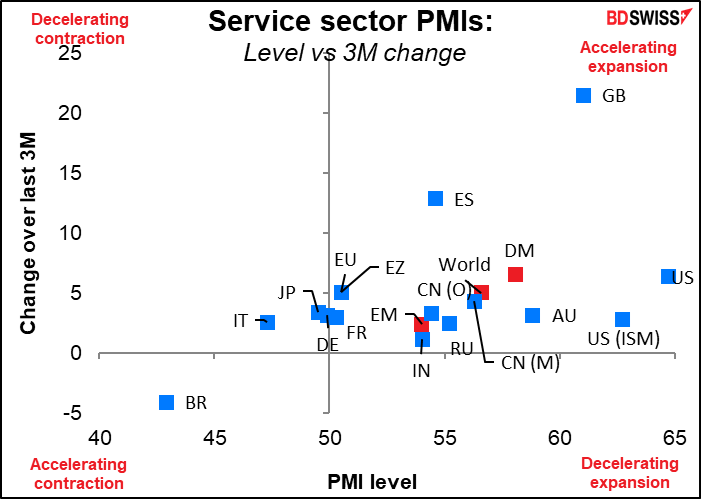 As the graph below shows, most countries are now above the 50 line in both manufacturing (X-axis) and services (Y-axis). 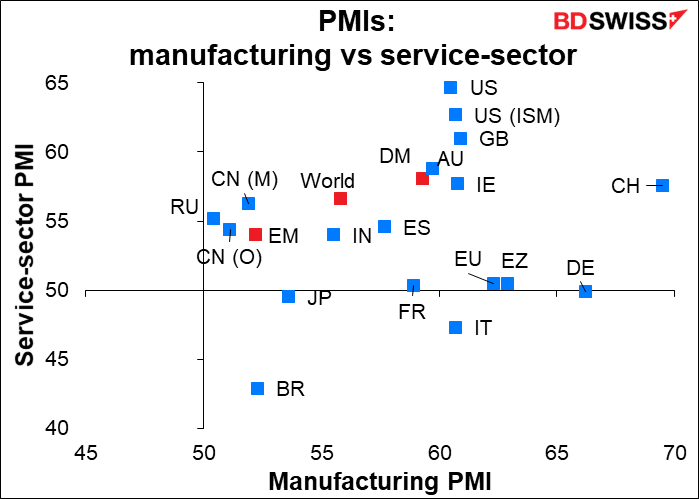 FOMC minutes:  The statement following the April meeting of the Fed’s rate-setting Federal Open Market Committee (FOMC) had only a few minor tweaks in it to acknowledge the improvement in the economy. In the press conference, Fed Chair Powell stated unequivocally that, “No. It is not time yet” to talk about tapering and that it would be “some time” until “substantial further progress” is made – comments that we’ve heard over and over again since then. Powell also highlighted the Committee’s view that any increase in inflation would be “largely” transitory – we’ve heard that one, too.

What further clarity could we get from the minutes? So far I’ve only noted one person, Dallas Fed President Kaplan, who’s itching to get started talking about tapering. We might get further insights into the discussion on this topic and how the members felt back then. We might also get a feel for the discussion about inflation and why they think it’s only transitory, although we’ve heard from enough members since the meeting to get a good idea of who’s where on that argument.

Given the number of Committee members we’ve heard from on the important points recently, and also given how conditions have changed in the 21 days between the meeting and the minutes’ release – the NFP and CPI shocks, specifically – I’m not sure these minutes will be particularly informative.

The most important one is Q1 GDP. It’s expected to show a decline in output, as the government declared a “state of emergency” in various parts of the country during the month. 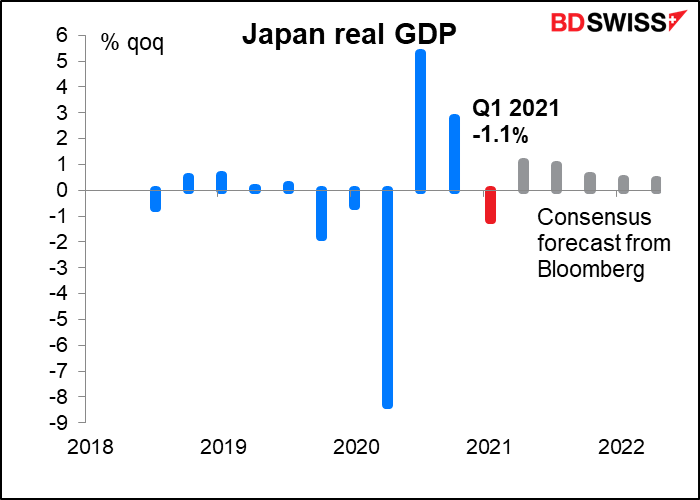 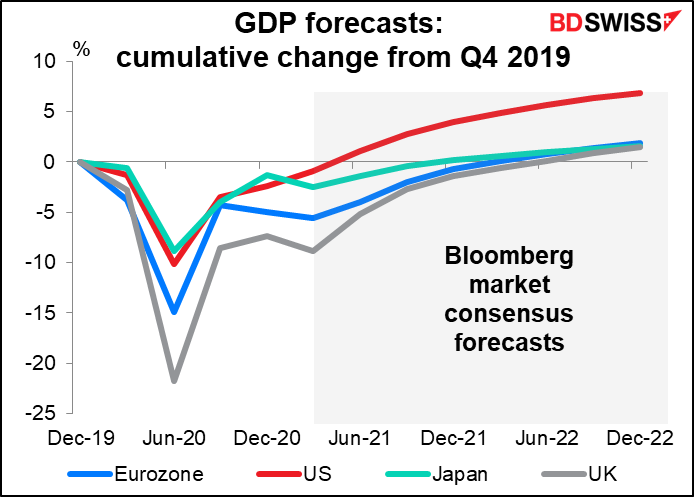 Having said that, there isn’t a great long-term correlation between US-Japan growth forecasts and USD/JPY. 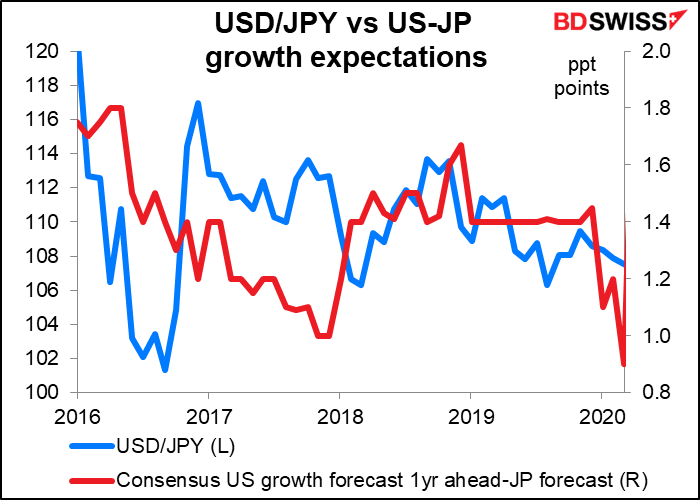 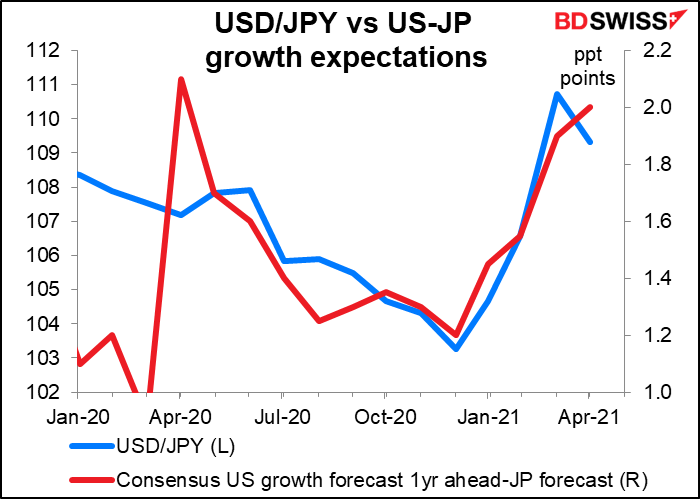 My guess is that any such correlation is driven largely by the US side, not the interplay of the two, since US bond yields are much more responsive to growth than Japanese yields and therefore the interest rate gap between the two countries is almost entirely a function of the movement of Treasuries.

As for the Japan national CPI (Fri), it’s expected to buck the global trend and move lower (sigh). 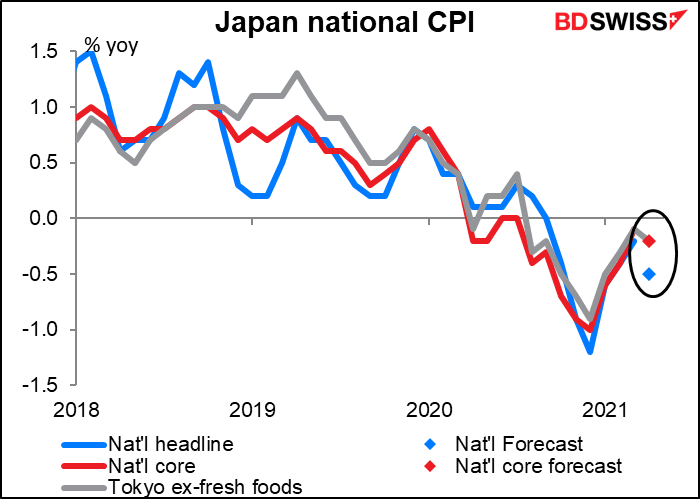 Australia’s employment (Thu) is expected to rise only modestly, while the unemployment rate is expected to stay at 5.6%. It could be that the recovery in employment is stalling, which would be a negative for AUD as it would mean that the Reserve Bank of Australia would have to keep rates lower for longer. 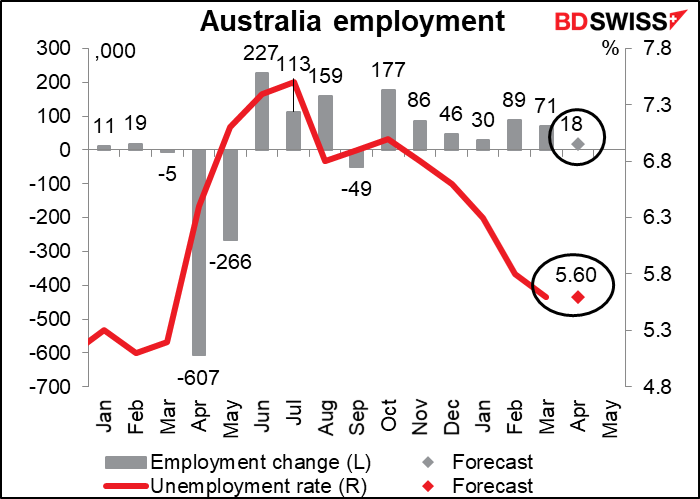 There are several major UK indicators out during the week.

UK inflation is expected to rise further, into the Monetary Policy Committee (MPC)’s 1%-3% area of tolerance. This is both for the CPI and the core CPI (which is why they’re only one dot – the forecast for both is +1.4% yoy). 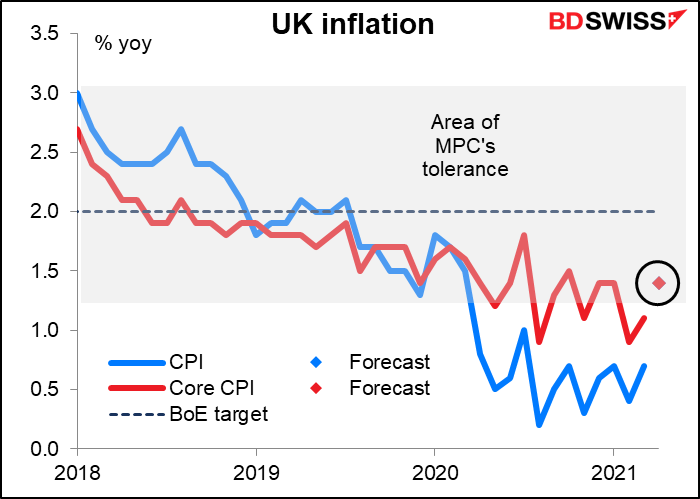 At the last MPC meeting (May 6th), they substantially upgraded their views on the economy and made a subtle shift in their forward guidance toward a more balanced view. The last paragraph, which contains the forward guidance, read:

The MPC will continue to monitor the situation closely and will take whatever action is necessary to achieve its remit….

At the previous meeting, in March, they said:

The MPC will continue to monitor the situation closely. If the outlook for inflation weakens, the Committee stands ready to take whatever additional action is necessary to achieve its remit….

The change implies they’re now thinking of the upside risks to their forecasts, too. This was no accident. Gov. Bailey emphasized this point in his press conference. A rise in inflation back into the target zone could accelerate thoughts of Bank of England normalization, which would be positive for the pound.

The second estimate of Eurozone Q1 GDP will be coming out Tuesday, but unlike in many other countries, the Eurozone GDP is usually only revised ±10 bps, if that, so it’s no big deal. 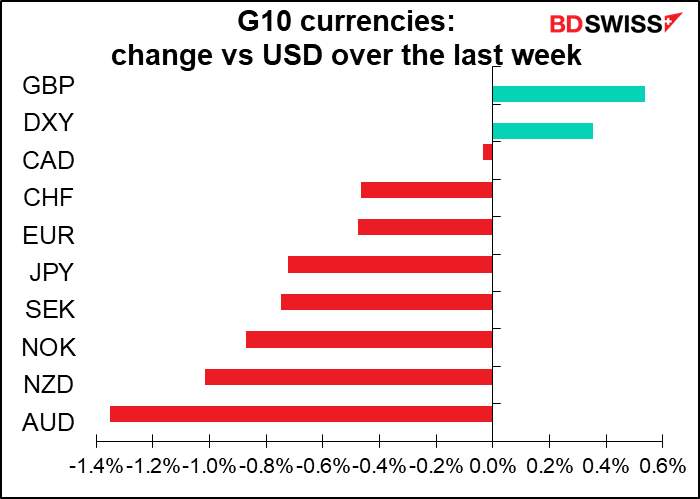