Have you ever had a stock that's so far in the green that you’d never sell it? Rolling with “House Money?”

My goal for these updates is to educate you, give you ideas, and help you manage money like I did when I was pressing the buy and sell buttons for $600+ million in assets. I left that career to pursue one where I could help people who needed help, instead of the ultra-high net worth. Hopefully, you’ll find the below enlightening from my perspective, and I welcome your thoughts and questions.

We are now firmly in the second week of 2021. After markets declined to start the week, we saw a muted recovery on Tuesday (Jan. 12).

With Democrats gaining full control of both the legislative and executive branches of the government, the prospect of further stimulus has sent stocks soaring to their highest valuations in years. However, the short-term tug of war between good news and bad news will continue.

I am especially concerned about overstretched valuations for stocks combined with the return of inflation.

The S&P 500 is trading at its highest forward P/E ratio since 2000, and the 10-year treasury is at its highest level since March. Overvalued stocks combined with inflation returning by mid-year is quite concerning for me. I feel that a correction between now and the end of Q1 2020 is likely.

According to Goldman Sachs’ Chief Economist Jan Hatzius, U.S. stocks and bond markets could possibly “ take more of a breather ” in the near term. National Securities’ chief market strategist Art Hogan also believes that we could see a 5%-8% pullback by the end of this month.

Generally, corrections are healthy, good for markets, and more common than most realize. Only twice in the last 38 years have we had years WITHOUT a correction (1995 and 2017). Because we haven’t seen a correction since March 2020, we could be well overdue.

This is healthy market behavior and could be a very good buying opportunity for what should be a great second half of the year.

While there will certainly be short-term bumps in the road, I love the outlook in the mid-term and long-term once the growing pains of rolling out vaccines stabilize.

The consensus is that 2021 could be a strong year for stocks. According to a CNBC survey which polled more than 100 chief investment officers and portfolio managers, two-thirds of respondents said the Dow Jones will most likely finish 2021 at 35,000, while five percent also said that the index could climb to 40,000.

Therefore, to sum it up:

While there is long-term optimism, there are short-term concerns. A short-term correction between now and Q1 2021 is very possible. I don’t think that a correction above ~20% leading to a bear market will happen.

House money is fun to play with, but trust me - you won’t feel as well if you let it ride through a full correction without taking profits.

Best of luck, and happy trading!

The Nasdaq’s RSI is Back Below 70...Where Does it Go from Here? 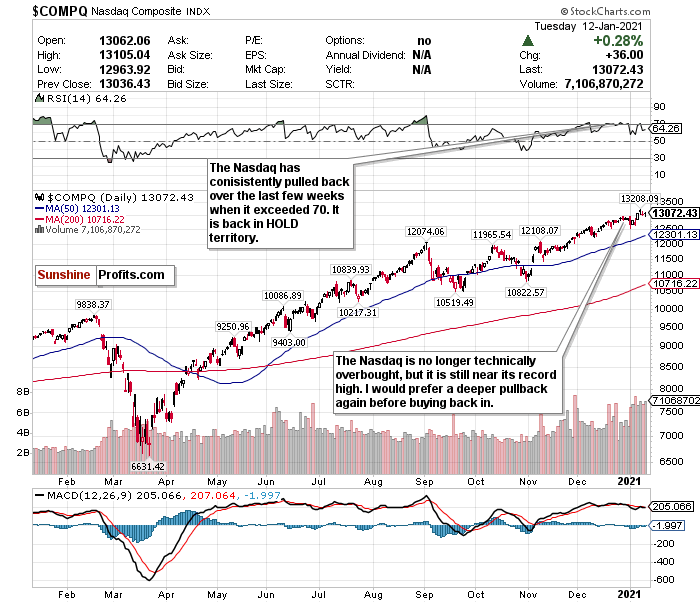 I am staying with the theme of using the RSI to judge how to call the Nasdaq. While an overbought RSI does not automatically mean a trend reversal, with the Nasdaq, I always keep a close eye on this .

I initially changed my short-term call on the Nasdaq from a SELL to a HOLD on January 5. I liked the Nasdaq’s declines to start 2021, especially after overheating. The RSI was no longer overbought as well.

After changing the call back to a SELL on January 11th, the Nasdaq declined 1.45%.

Over the last several weeks, this has been a consistent pattern for the Nasdaq. The Nasdaq pulled back on December 9th after it exceeded an RSI of 70, and briefly pulled back again after passing 70 again three weeks ago. We exceeded a 70 RSI again before the new year, and what happened on the first trading day of 2021? A decline of 1.47%.

Tech can rally at any time and witness a plunge at any time. Truly, this sector could move sideways before seeing a correction sooner rather than later.

Although there are also tailwinds for tech, they are specific to subsectors. Do what you can to find tech sub-sectors that are innovating, disrupting, and changing our world.

I am especially bullish on cloud computing, e-commerce, and fintech.

The Nasdaq is no longer overbought, and its RSI is now hovering around 64. I like this level more as a HOLD, but I still feel that it has overheated in the short-term.

I am generally optimistic and bullish for 2021, but I would like a pullback closer to the 50-day moving average before considering buying back in.

I also have some concerns with the Democrats winning Senate control, and its potential consequences for tech. It may not happen in 2021, but a Democrat-controlled Congress could raise taxes and further regulate high growth companies.

Additionally, love him or hate him, the censorship of President Trump across social media platforms raises questions about what constitutes free speech, and if Big Tech has too much power.

Because the RSI is back in HOLD territory, I’m switching my call again from SELL back to HOLD.

If the RSI ticks back up above 70, I’m switching back to SELL. The Nasdaq is trading in a clear pattern.

Do not let anyone tell you “this time is different” if fears of the dot-com bubble are discussed. History repeats itself, especially in markets. I have many concerns about tech valuations and their astoundingly inflated levels. The recent IPOs of DoorDash (DASH) and AirBnB (ABNB) reflect this.

For an ETF that attempts to directly correlate with the performance of the NASDAQ, the Invesco QQQ ETF (QQQ) is a good option.