This is not a correlated market. The dollar is Down- and Crude is Up+ which is normal and the 30 year Bond is trading Higher. The Financials should always correlate with the US dollar such that if the dollar is lower then bonds should follow and vice-versa. The S&P is Lower and Crude is trading Higher which is correlated. Gold is trading Higher which is correlated with the US dollar trading Down. I tend to believe that Gold has an inverse relationship with the US Dollar as when the US Dollar is down, Gold tends to rise in value and vice-versa. Think of it as a seesaw, when one is up the other should be down. I point this out to you to make you aware that when we don't have a correlated market, it means something is wrong. As traders you need to be aware of this and proceed with your eyes wide open.

At this time Asia is trading mainly Lower with the exception of the Shanghai and Sensex exchanges which are trading Higher. Currently all of Europe is trading Lower.

Unemployment Claims are out at 8:30 AM EST. This is Major.

FOMC Member Clarida Speaks at 9:10 AM EST. This is Major.

FOMC Member Evans Speaks at 9:10 AM EST. This is Major.

Fed Chair Powell Testifies at 10 AM EST. This is Major.

Crude Oil Inventories is out at 11 AM EST. This is Major.

FOMC Member Williams Speaks at 12 noon EST. This is Major.

Yesterday the ZB made a major move at around 8:30 AM EST. The ZB hit a High at around that time and the S&P hit a Low. If you look at the charts below ZB gave a signal at around 8:30 AM EST and the S&P moved Higher at the same time. Look at the charts below and you'll see a pattern for both assets. ZB hit a High at around 8:30 AM and the S&P was moving Higher shortly thereafter. These charts represent the newest version of MultiCharts and I've changed the timeframe to a 15 minute chart to display better. This represented a Shorting opportunity on the 30 year bond, as a trader you could have netted about a dozen ticks per contract on this trade. Each tick is worth $31.25. Please note: the front month for the ZB is now December. The S&P contract is now at December as well and I've changed the format to Renko bars such that it may be more apparent and visible. 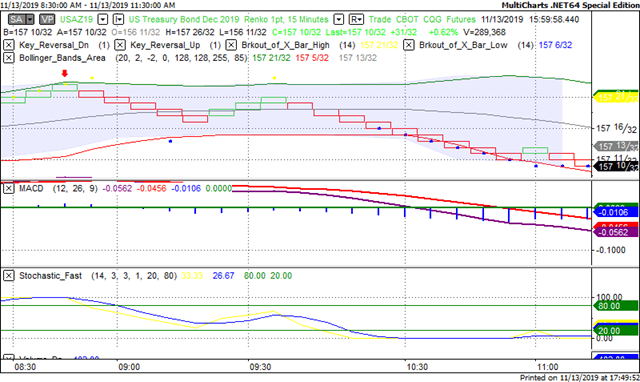 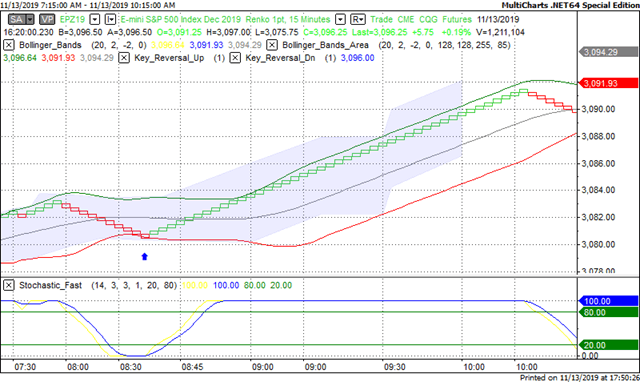 Yesterday we gave the markets a Downside bias as both the USD and the Bonds were pointed Higher yesterday morning and this usually represents a Downside day. Additionally there was a fear that the Administration may raise tariffs on goods imported from China. The markets however had other ideas as the Dow rose by 92 points, the S&P gained 2 but the Nasdaq fell by 4. Today we aren't dealing with a correlated market and our bias is Neutral.

Yesterday began the first day for the public impeachment hearings and up first were the Democrats who truly seemed to have all their facts in order. The GOP followed and claimed that everything they heard was hearsay and had no basis in truth. Well the Democrats will soon have a witness who did have direct contact with President Trump and who already testified on what was said and actions taken. Time will tell what (if any) impact this may have. The interesting thing is the markets didn't drop and in fact gained some ground. We'll have to see what happens in the days ahead.

When are the UK data releases and how could they affect GBP/USD?

GBP/USD stays pressured around 1.2550 after flashing the biggest losses in two weeks the previous day. The British economic calendar will entertain the global traders amid recently sluggish markets at 06:00 GMT with the GDP figures for May.

EUR/USD looks north with the German economy showing signs of bottoming out and heightened expectations for an EU fiscal stimulus plan. Stronger gains, however, may remain elusive if the stock markets drop, tracking losses on Wall Street.

Consumer prices that collapsed in March and April have begun to return to normal as people return to work and shopping, and the country puts the complete lockdowns of the spring behind it.

WTI: Bears firming up the grip towards immediate support lines under $40.00

WTI stays on the back foot after taking a U-turn from $40.87 the previous day. An ascending trend line from June 25, monthly support line are on the sellers’ radars. A three-week-old falling trend line restricts the pair’s immediate upside.