SPX Long-term trend:  There is some evidence that we are still in the bull market which started in 2009 and which could continue into the first half of 2021 before major cycles take over and it comes to an end.

SPX Intermediate trend:  Phase two from 3853 does not look complete. 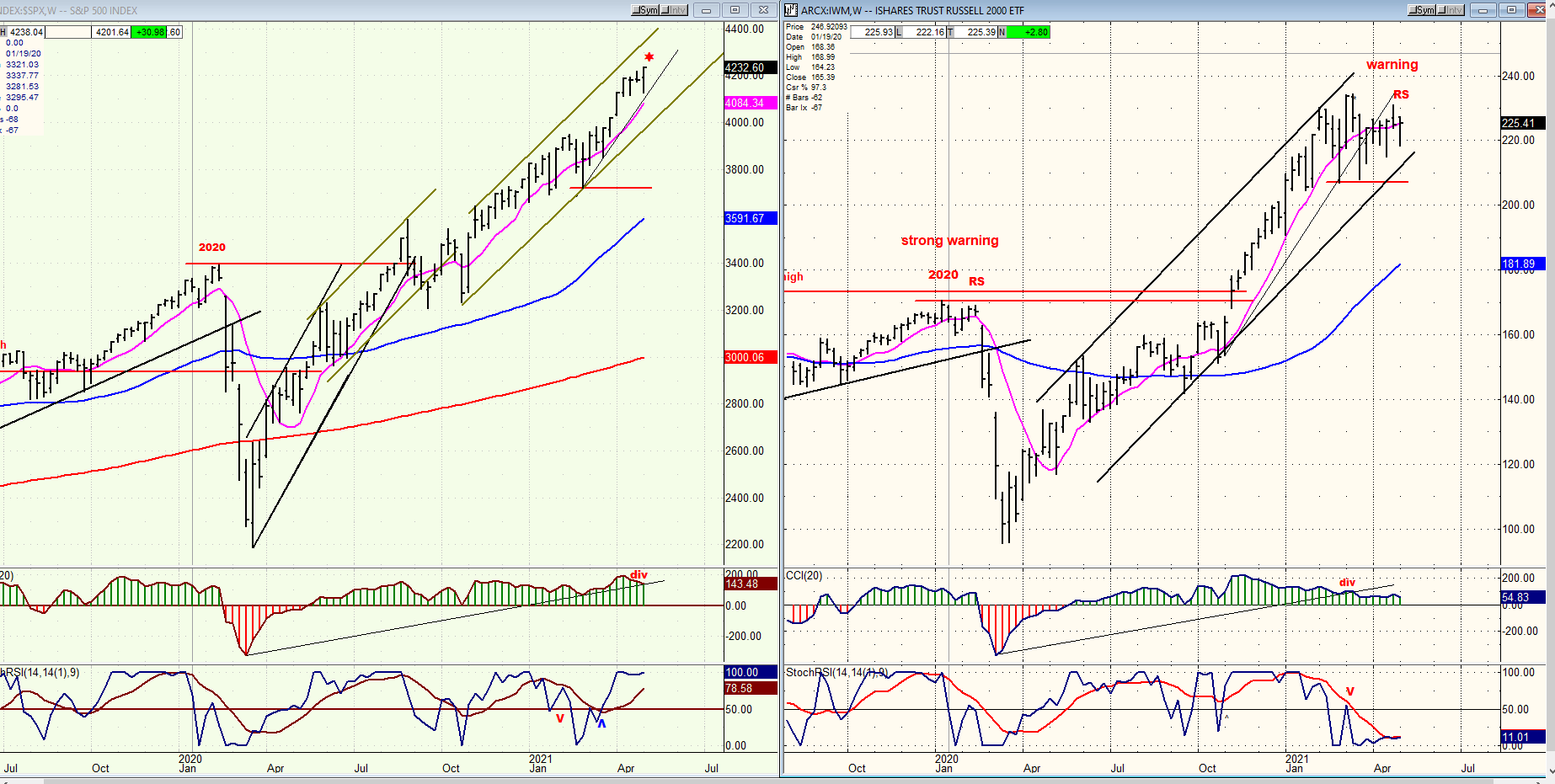 SPX is being pulled in different directions by the Nasdaq which is correcting and the DJIA which is making daily all-time highs.  As a result, the intention of this index has become unclear.  After rising from the 3853 low, it made two consecutive short-term tops: one from 4191 on 4/16 which brought about a 73-point correction, and another from 4219 on 4/29 which resulted in a 100-point pullback and ended on 5/04.  Since then, SPX has already made a new all-time high and appears to have started a new uptrend which could prolong phase two -- but perhaps not by much.

First, the relative weakness exhibited by IWM suggests that a deeper correction should soon be taking place.  Second, the P&F pattern is more suggestive of a top than of a base.  And third, a dependable short-term cycle is scheduled to bottom around the 17th.  That cycle is also obvious on the DJIA which should be in the process of topping any day, now.  This would fit with the current SPX structure which may require another day or two to complete.

Making a short-term top is still the preferred scenario with a potential 4240-4260 target max.  What happens next will depend on how much weakness will be triggered by the short-term cycle and if the correction can extend outside of the purple channel and below the 4120 level. 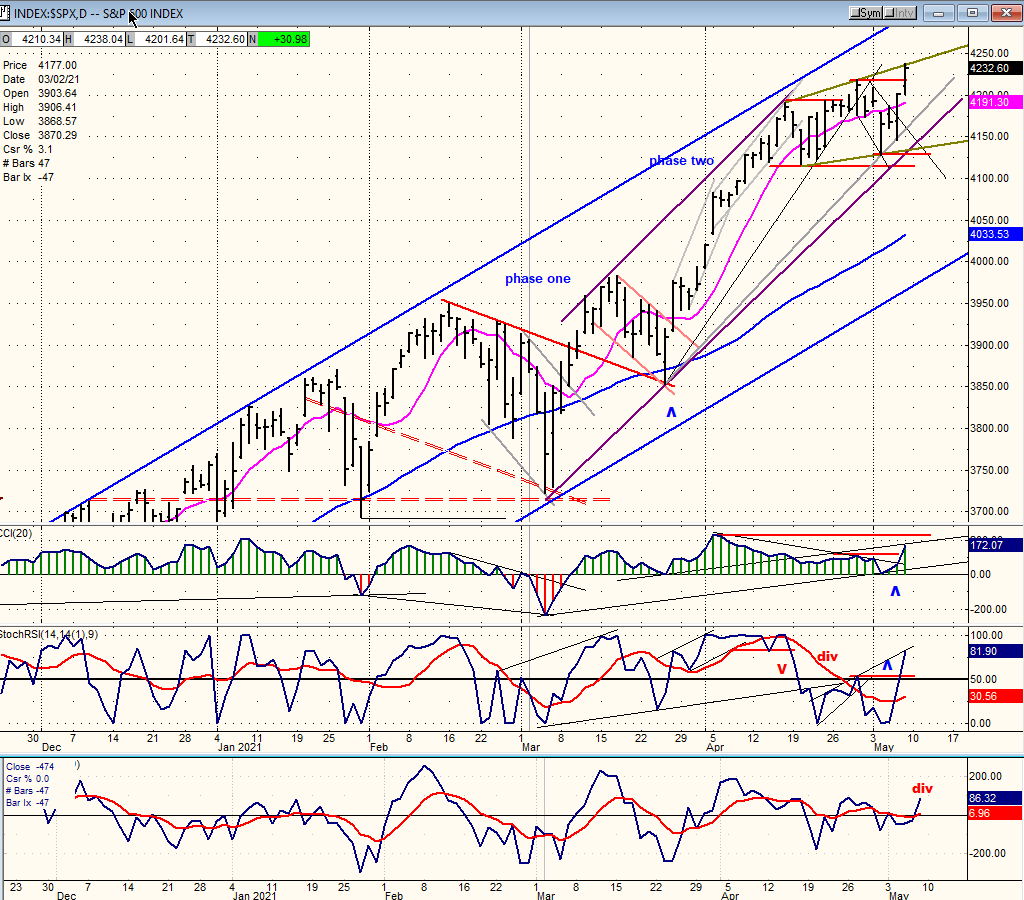 The hourly chart does not add much to the analysis of the daily chart, except perhaps to show more clearly that the move which started on the 4th has a structure which is incomplete, and which should take SPX a little higher before completion.  The index will have to move outside of the purple uptrend line and below the 4120 level to give a sell signal suggesting that phase two is now complete.  It would be best if price remained below the pink upper trend line as it makes its short-term high. 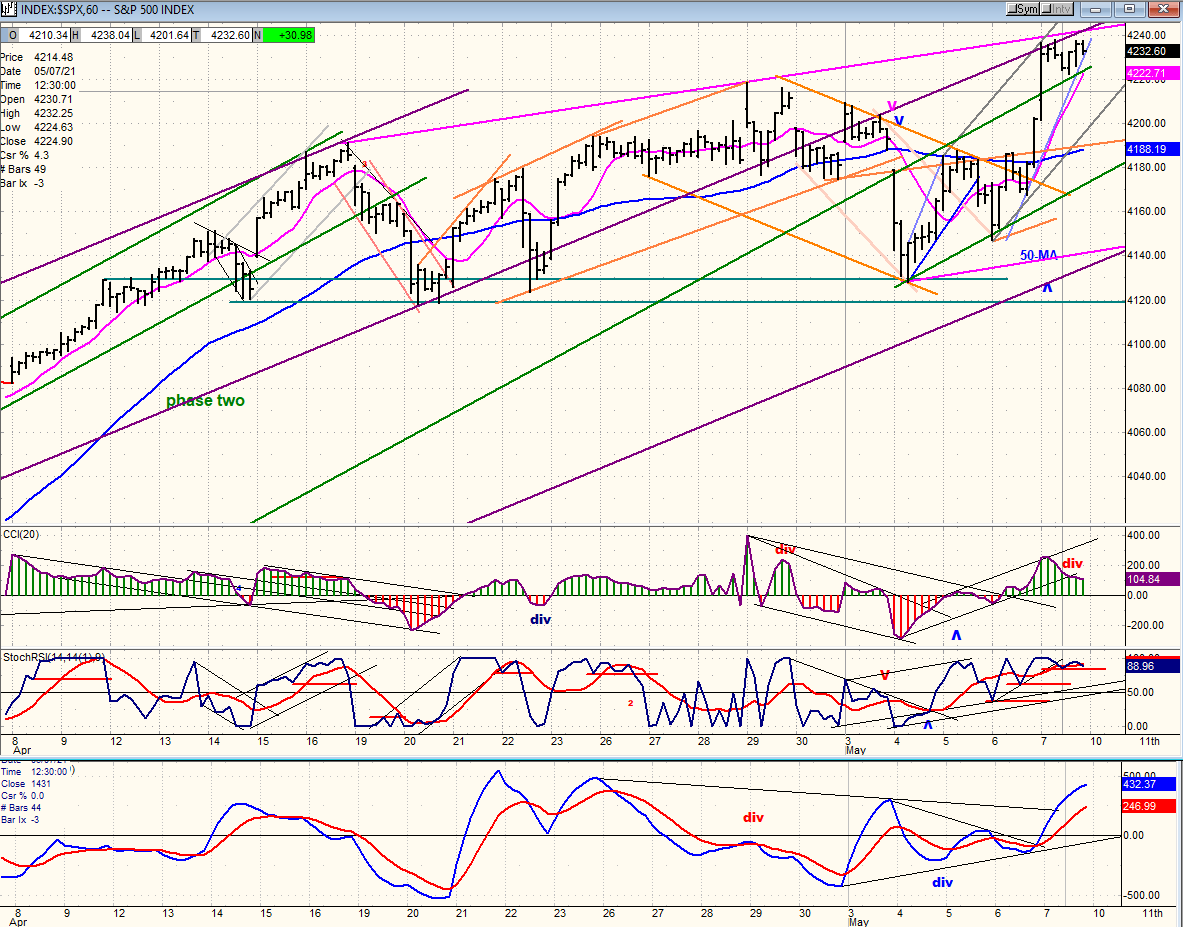 UUP barely bounced before dropping lower, almost reaching the lower trend line of the main channel from 5/14 where it found support twice before.  Looking at the longer- term chart, it looks like a retest of the 2018 low above which it should hold for some time. 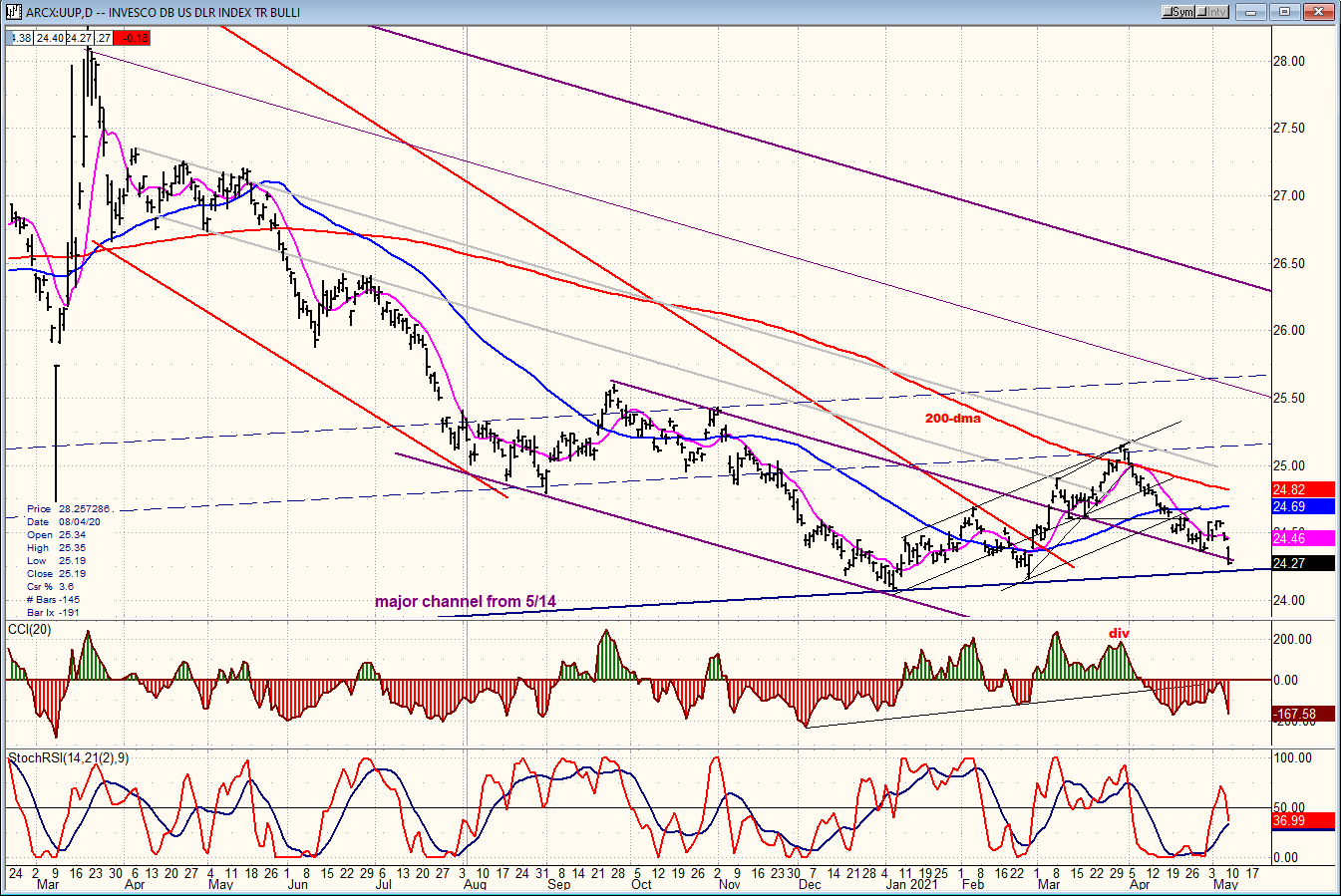 GDX is still pushing higher after making what appears to have been an intermediate-term low.  Another .60 would put it against the top of its corrective channel where some temporary resistance may be found before it can push to the 39-40 level suggested by the P&F chart.  The negative divergence showing in the CCI does not look serious and could easily be dispelled by a continued advance. 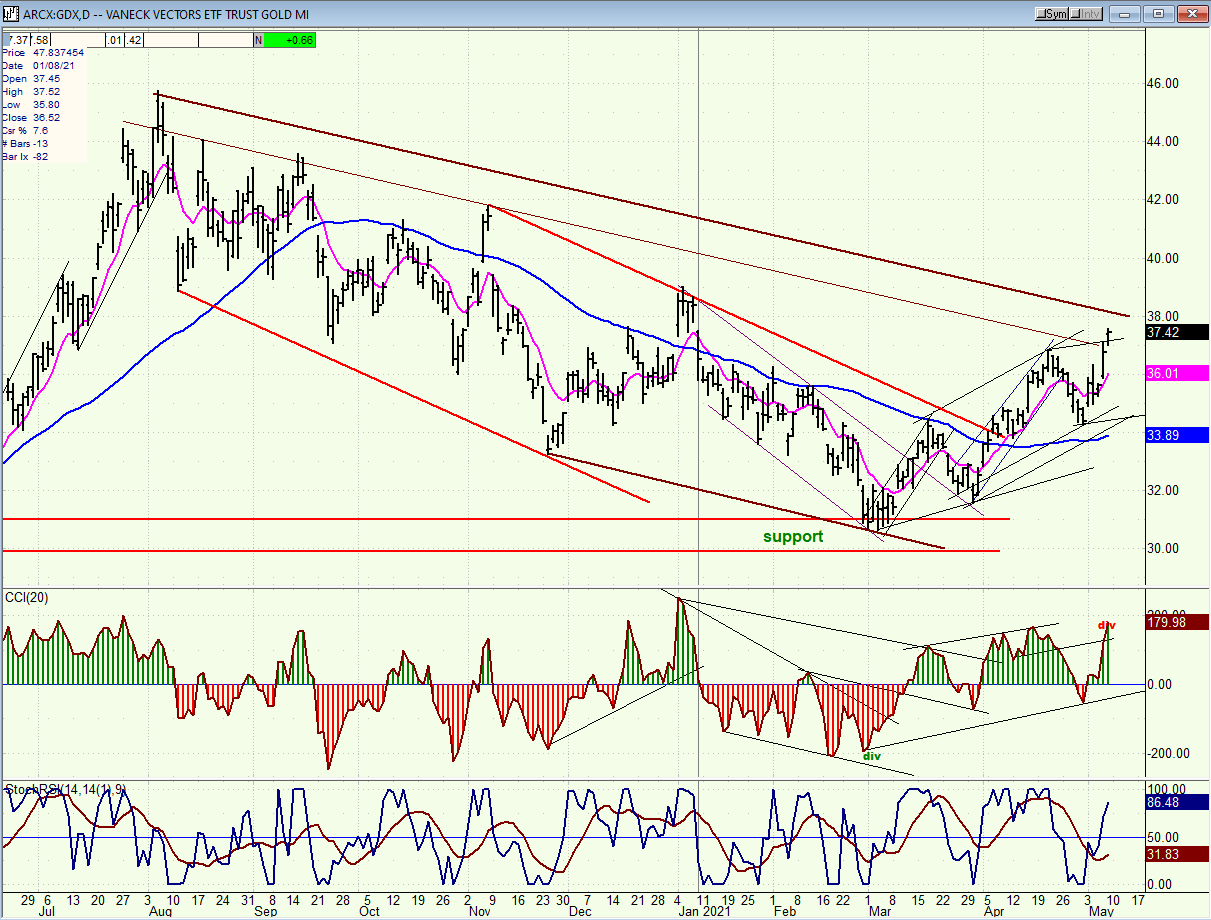 PAAS found resistance from a secondary trend line 35 and is consolidating.  It may not remain there for long since the oscillators and the P&F chart suggest a move to 39-40 could take place, next. 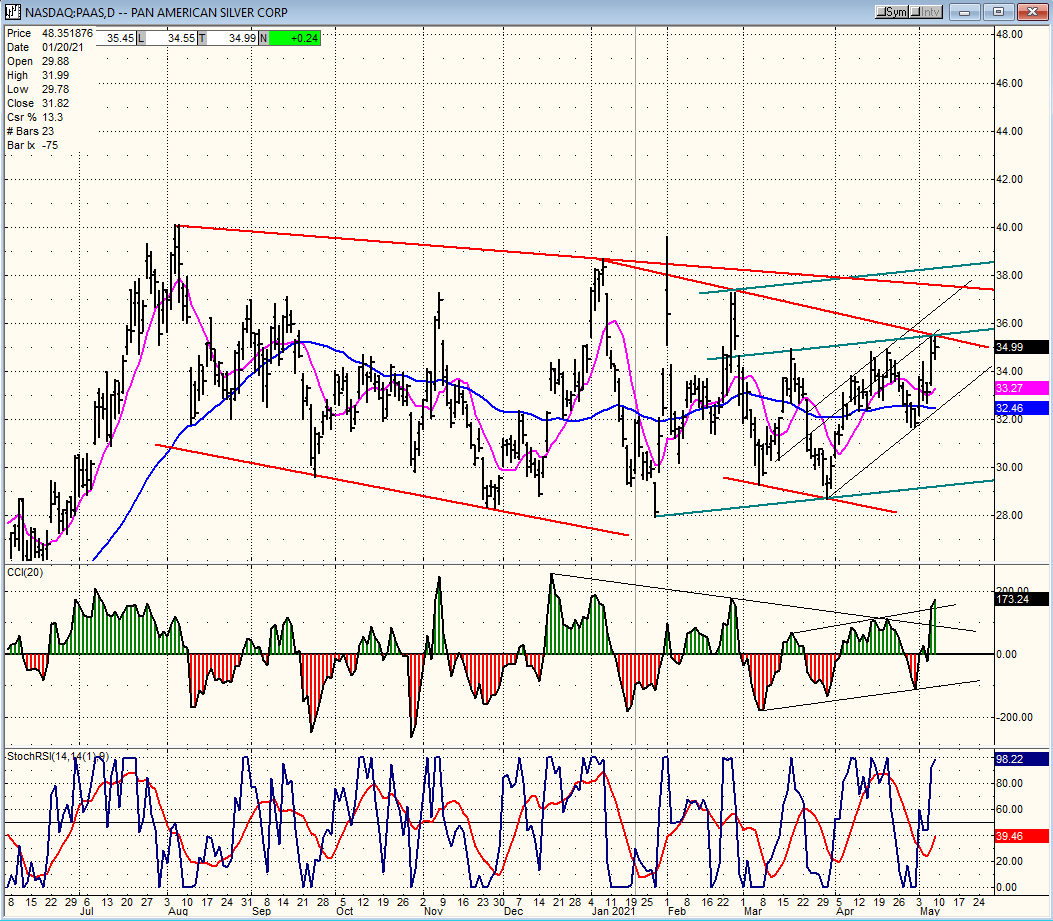 With negative divergence showing in its CCI, BNO may need to pull back for some additional consolidation before pushing to a new high. 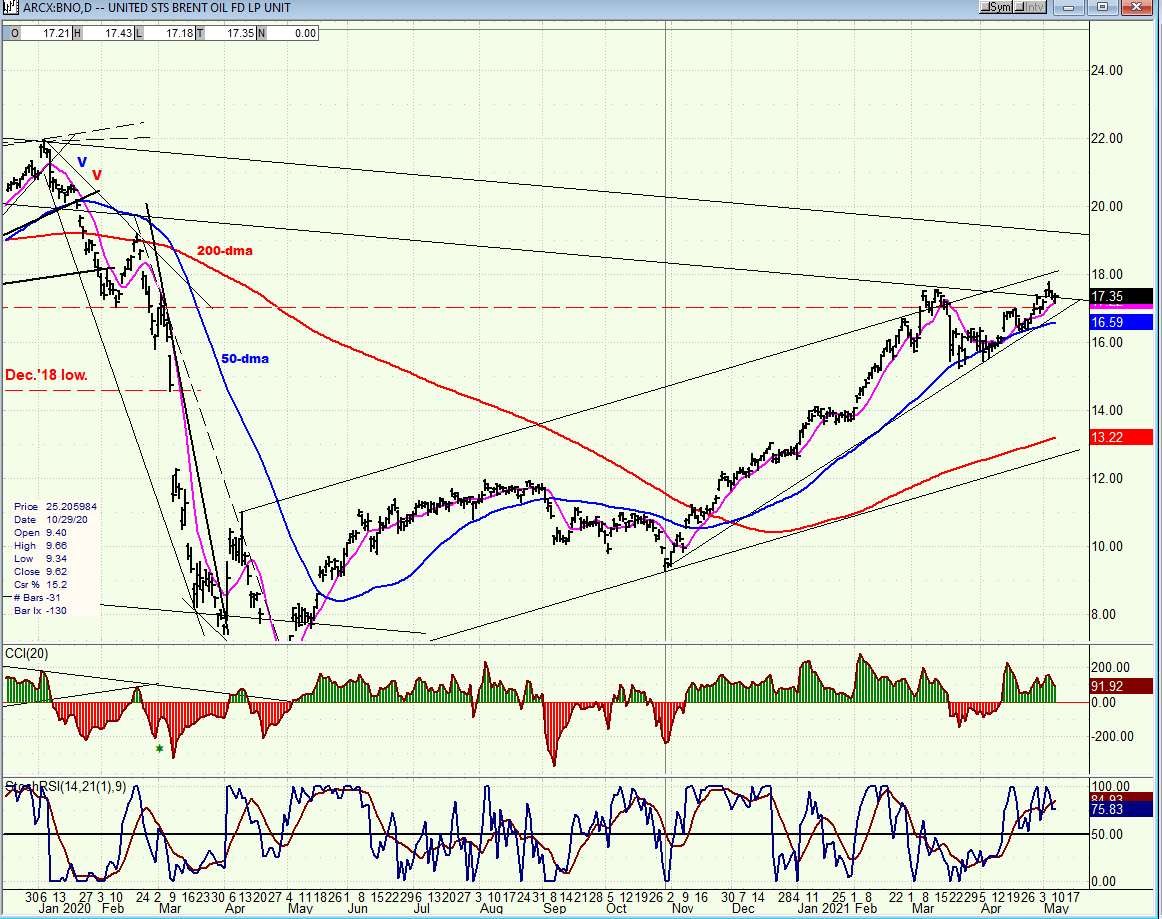 SPX was not able to extend its 100-point correction and made a new high.  It is possible that phase two is not yet complete.