Yesterday was huge in that market. We saw how the GameStop (GME) short squeeze was finally fizzling with the buying frenzy turning to full-blown liquidation, which sent GME stock below $50 or down nearly 50% on the day back to where it was trading on the Friday when Andrew Left capitulated to the r/wallstreetbets horde, a clear rotation was taking place. 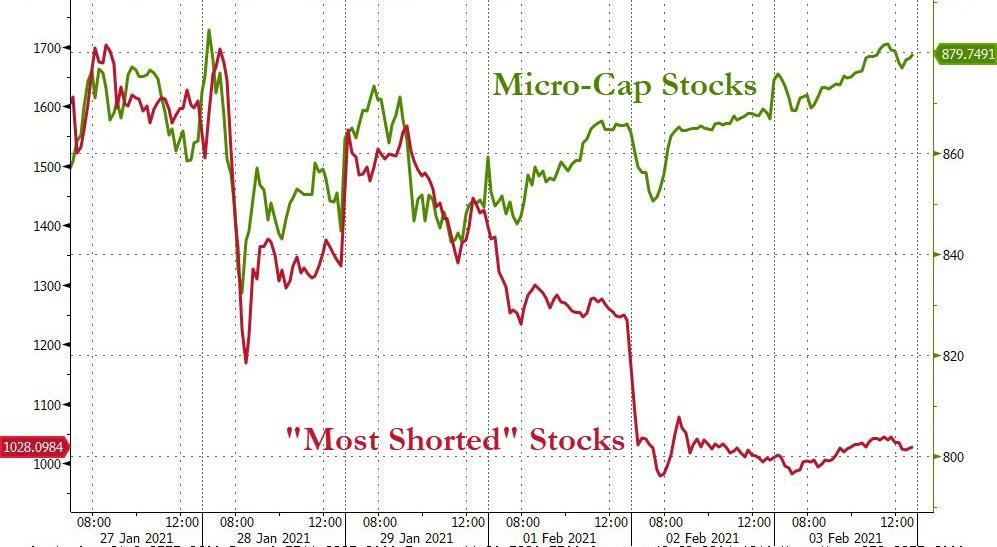 And while the waves of ramping were initially diffused without a clear target, as the day progressed it emerged that the "reddit rebellion" was now targeting tiny biotech names (under $2 billion in market cap, hence illiquid enough where a group of retail day traders could leave quite a mark) which, while not having GME's absurd 140% short-to-float ratio, were also quite shorted. This is merely a continuation of what we observed earlier in the week.

As an example of just how sensitive the redditors (and any retail investors for that matter) have become, consider what happened after the close, when Jefferies health-care equity strategist Jared Holz spoke on CNBC, and said that the trio of Karyopharm Therapeutics (KPTI), Rocket Pharmaceuticals (RCKT) and Madrigal Pharmaceuticals (MDGL) could be on the Reddit hit list given their high short interest and recent lack of volatility.

Literally second later, these three stocks shot up, with KPTI rising as much as 27%, RCKT jumping as much as 15% and MDCL rose 12%. 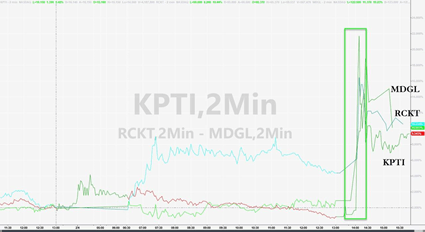 That's all we needed to know because it was now quite clear which way the wind was blowing: as WSB rotates out of the purely most shorted names, they are trying to spark buying frenzies in not just shorted names but also illiquid, small cap biotechs which may or may not have been left for dead.

So in anticipation of what may be another torrid session today, here is a screen of the 25 most shorted biotechs trading on the Nasdaq and with a market cap below $2 billion, where we find names such as ATOS, CYCC, KPTI (mentioned above), KDMN (a name that Steve Cohen recently revealed a 5.3% position), VXRT (which exploded higher earlier this week), and various other names.

And while the "most shorted" biotech names have already ramped aggressively yesterday, the same could be said about the most-shorted Russell 3000 stocks before they exploded 3x higher in the next two days. Expect more Fireworks for sure!