If there were one place for 21st-century central bankers to look for the economic efficacy of very low-interest rates it should be Japan. But Japan is rarely mentioned in polite economic society.

Japan has had negative interest rates for four years. The overnight call rate set by the Bank of Japan was cut from 0.1% to -0.1% in February 2016. It has not moved since.  Japan has had ultra-low rates for more than two decades. The BoJ reduced the overnight rate to 0.5% in September 1995. It has not been above that level in the subsequent 24 years.

When on the rare occasion an ECB or Fed official is asked about the BoJ precedent the answer inevitably refers to Japan’s special circumstance as to why this glaring example does not apply to Europe or the United States.

Japan is not cited for the simple reason that negative rates have been a dismal failure for what was once the world’s second-largest economy and is now a distant third.

A glance at Japan’s growth rate over the last two decades shows the irrelevancy of the BoJ’s monetary policy. There is almost no economic reaction to the advent and then the persistence of low-interest rates. Cheap money does not spur business expansion, it does not foster economic activity. It is as if zero-bound interest rates remove the cost of money from the economic equation.

The implications of the Bank of Japan’s economic dilemma and its failed interest rate solution are twofold for the Japanese yen on the world currency market.

Zero interest rates have left the BoJ without the ability, one wants to say the nerve, to initiate a rate increase cycle. No improvement in the Japanese economy over the past 25 years has prompted more than a temporary and shallow rise in interest rates

In the 24 years that the overnight call rate has been at 0.5% or lower the BoJ has managed two short periods of rate increases.

In August 2000, after being at zero for ten months for the first time in its history, the bank raised the overnight call rate 25 basis points. The rate stayed there for seven months and then in February 2001, the bank dropped it back to zero.

Another attempt to leave the zero bound took more than five years, 64 months to be precise.

After 19 months the BoJ gave up, sliding the call rate back to 0.3% for two months and then to 0.1% in December 2008 at the height of the financial crisis. It would remain there for the next seven years and two months. In February 2016, the governors instituted negative rates at -0.1%. The call rate has been there ever since.

After a generation when the BoJ was unable to find the economic rationale for normalizing monetary policy a new reality is in place. Under almost any conceivable economic circumstances, the BoJ is unlikely to provide the interest rate bracing for an ascendant yen.

In practice, it means that the state of the Japanese economy and any BoJ response will have little effect on the yen.

It doesn’t mean of course that developments in Japan cannot affect the currency.

If a serious earthquake struck the islands, the yen would certainly fall. We have seen the yen safety trade when the US-China trade dispute escalates. But it does mean that the likelihood of a domestic economic event or statistic spurring the BoJ to a rate increase or a tightening cycle is very small.

For traders, price action in a currency pair is two-way. Not only is the price binary but the event rationale is also, or should be. A change in the economic, political or interest rate environment of either partner in a can motivate the market to bid or offer the pair.

For the USD/JPY, the Fed and the BoJ should be able to create movement. Even in the highly coordinated post-recession world central bank interest rate policies do not always move in parallel. Witness the summer’s surprise rate cuts by the Reserve Banks of New Zealand and Australia and the effects on the respective currencies.

In Japan’s case, BoJ rate paralysis means that when the USD/JPY is moved by economic developments they tend to be based on US or global developments. Or to be more specific markets have given up on the idea that the BoJ runs a monetary policy that could, in the proper circumstances, support the yen.

The Bank of Japan example is one that the ECB should consider very carefully.

Over time zero or negative rates habituate. The economy and its decision-makers cease to consider interest rates a variable. Economic activity becomes fully addicted to the negligible cost of funds. Central bank policymakers, for fear of damaging the economy, become incapable of risking their removal.

Once zero rates have infiltrated the economic processes, they become impossible to eliminate without an extraordinary effort which the Bank of Japan and Japanese political leadership have never been able to muster.

The Bank of Japan has not had an interest rate policy for a generation. Zero rates ended Japan’s traditional monetary policy long before Ben Bernanke ever dreamed of quantitative easing.

Janet Yellen and Jerome Powell and their colleagues on the Federal Reserve deserve enormous credit for removing the US monetary policy from the trap of zero interest rates. Though Japan was rarely mentioned, it must have served as a dire warning for the seductive and insidious effects of the zero bound on monetary policy. It is an example Christine Lagarde and the ECB would do well to heed.

There is never a good time to raise interest rates in a chronically weak economy, except, to paraphrase Winston Churchill, all the time. 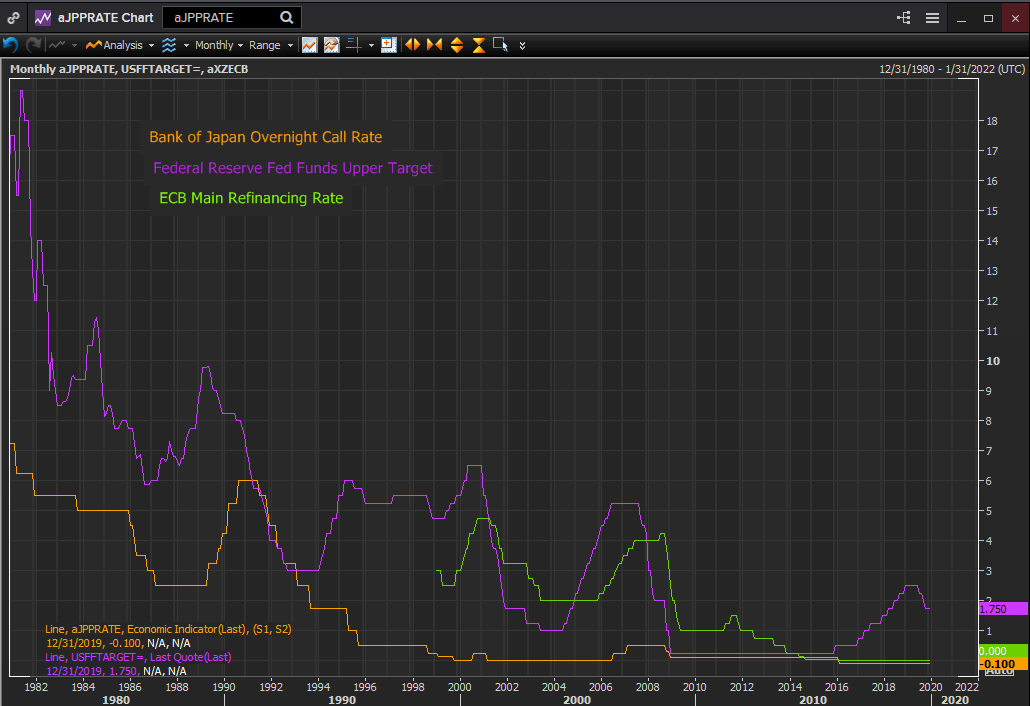 This article belongs to the 20 trading ideas for 2020 series. Check the full list of 2020 pieces.