Rising COVID counts in many US states have revived the spectre of last year’s devastating lockdowns. Even though hospitalization and fatality rates are far below those of 2020, the potential damage has business operators on edge.

The Purchasing Managers’ Index (PMI) from the Institute for Supply Management (ISM)  is forecast to rise to 60.4 in July from June’s 60.1. In May the Employment Index was 49.3, the New Orders Index was 62.1 and the Prices Paid gauge was 79.5.

What to Expect: Manufacturing PMI

Manufacturing PMI unexpectedly dropped to 59.5 in July. It had been forecast to rise to 60.9 from 60.6. Sentiment in the factory sector has now fallen more than five points from its high of 64.7 in March.

The New Orders Index slipped to 64.9 from 66 last month and the Prices Paid Index dropped to 85.7 from its June record of 92.1.  Employment rose to 52.9 in July, above the index division at 50 between expansion and contraction, from 49.9 in June.

Manufacturing has been at the forefront of the US economic recovery, evincing a sustained expansion that began in June 2020, and reached a decade high at 64.7 in March of this year. 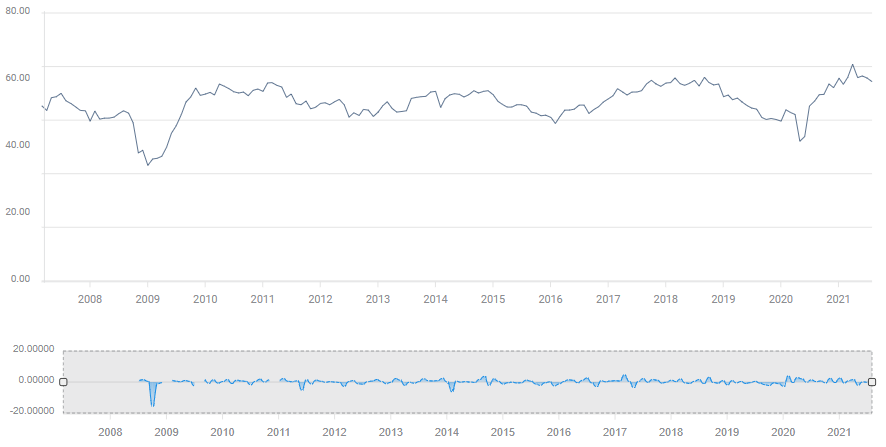 The New Orders Index had soared to an all-time record of 68 that same month and employment was at 54.4.

Price Paid climbed to its own record of 92.1 in June, as the base effect on inflation was compounded by extensive labor shortages and supply chain disruptions, driving prices higher at the fastest pace in a decade. 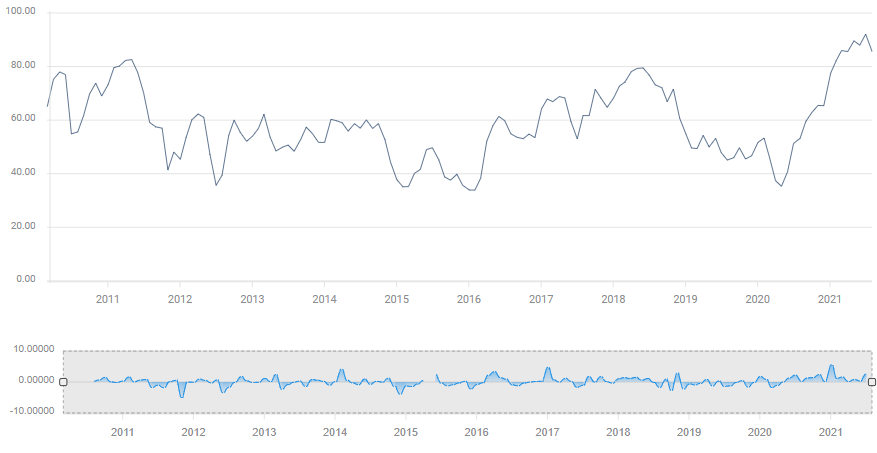 The factory sector, though only about 15% of the GDP output, is considered a leading indicator for the entire US economy. Longer lead times for manufactured products and the greater need for skilled labor mean that factory managers must plan farther ahead, making their decisions more predictive.

The correlation between the manufacturing and service indexes is high. When factories lead retail stores are almost sure to follow.

What to Expect: Market impact

Purchasing Managers' Indexes are sentiment gauges. They measure the outlook of business executives, not actual sales or production and are part of an economy’s general background information. They are, however, useful at pointing out inflection points, turns in economic sentiment that often lead lower or higher, before the change shows in the economic data.

In the current situation, with fears, however unrealistic, of another economic desert ahead, a pronounced fall in PMI would be an extremely negative signal.

Although a minor decline is anticipated, it does not presage a serious economic problem. In particular, the New Orders Index, which asesses incoming business remains very strong. The four month average of 64.1 is the highest in over ten years and compares favorably with 55.9 from September to December 2019.

Nonfarm Payrolls added 850,000 workers in June, 20% more than expected and another 880,000 hires are expected in July. Although more than seven million of the 22 million who lost their position in the lockdowns may still be unemployed, job opening are also at an all-time record.

Retail Sales and Durable Goods, notices of the consumer economy, have been healthy. Industrial Production has risen for four straight months and is positive in 10 out of the last 12.

The psychological distress from another series of pandemic restrictions is understandable. Economic activity, however, is resilient. Second quarter GDP at 6.5%, may have been a disappointment, but the 6.4% average for the first half, is the fastest growth in a generation.

Markets will note the PMI number, but continue to trade the economic data.