The Euro has been one of the star performers of 2017. We will now try to determine its main drivers of strength, as well as its potential outlook going forward.

1. Euro sentiment had been on the bearish side for a prolonged period of time. This was due to a combination of factors such as weak economic data, the Greek crisis and the rise of far-right political parties. This bearish sentiment has now shifted towards the bullish end of the spectrum, resulting in Euro strength.

2. Eurozone economic data are improving. Germany is no longer the main force behind EZ strength; in fact while Germany seems to be reaching a plateau, other EZ countries are emerging and picking up the baton.

3. ECB governor Mario Draghi has recently been less dovish than usual. During the 2017 Jackson Hole Symposium he shared an optimistic outlook and didn’t talk down the Euro’s recent appreciation. This was a departure from his usual stance, which was seen by the markets as being hawkish.

4. ECB members are already discussing the possibility of tightening monetary conditions in the near future. This will probably involve gradual balance sheet reduction as well as interest rate hikes.

5. The danger of Greece – or another country – leaving the Eurozone has diminished substantially. Just a few years ago the possibility of Grexit was looming large, along with the potential domino effect that could even lead to a Eurozone collapse in some extreme scenarios. Today, such events carry an extremely low probability and there seems to be broad stability in the EZ.

6. When the UK voted to leave the European Union, there was uncertainty on both sides of the equation. As Brexit negotiations began, it’s become evident that the UK government is on the back foot. Risks exist on both sides but it seems that the EU is in control of the negotiations at this point.

7. The US Dollar has been weakening markedly in 2017, for a variety of reasons. The most broadly traded & liquid FX pair is EURUSD and it has rallied around 1500 pips from the lows. This EURUSD move has a side effect of pushing other Euro crosses higher (e.g. EURGBP, EURAUD, EURNZD etc) and sending out a picture of broad Euro strength.

8. The combination of rising global geopolitical tensions with US Dollar weakness are sending safe haven flows into the Euro, among other “safe” currencies.

Following its recent strong run, where does the Euro go from here based on fundamentals? Let’s take each point in turn.

1. As the Euro rallied in 2017, sentiment has become more and more bullish. In fact the DSI index has now flipped to the other extreme, registering a 93 reading on the 28th

2. The Eurozone’s recovery is still relatively fragile overall, just like other major economies around the world. Inflation is still stubbornly below the ECB’s target and it’s hard to see the ECB tightening substantially while inflation remains subdued.

3. Mario Draghi’s tone may have recently turned more hawkish than usual, but central bankers are renowned for being unreliable in such ways. Draghi is well aware that the Eurozone’s exports suffer as the Euro strengthens, so it’s just as probable that he will be dovish again soon.

4. The ECB members’ hawkish speak has created expectations which must now be met.

5. Greece is not a country that’s been “fixed”. Serious structural, fiscal and political problems remain and they will inevitably resurface in due course. Unless the country’s problems are comprehensively addressed, the exit scenario may resurface to haunt the Euro.

6. Brexit negotiations may seem to have the EU in control, but it’s still very early days. EU officials need to make an example of the UK, in order to deter other countries from leaving. On the other hand, the UK is in the top 3 European countries by GDP and an important trading partner to EU countries. Ultimately there will likely be an acceptable compromise for both sides.

7. The DXY has lost around 10% and is bouncing off big support at around 91.5. For the Dollar to lose more ground, the US economy needs to show continued weakness that will warrant ending the current hiking cycle. There is always the possibility of a sustained Dollar bounce and such a move will put pressure on the Euro.

8. Geopolitical tensions are at elevated levels, with the North Korean situation being particularly worrying. However, it’s likely that these are simply political games that will be resolved with politics, with the ensuing risk-on market reaction reversing some of the recent Euro move. 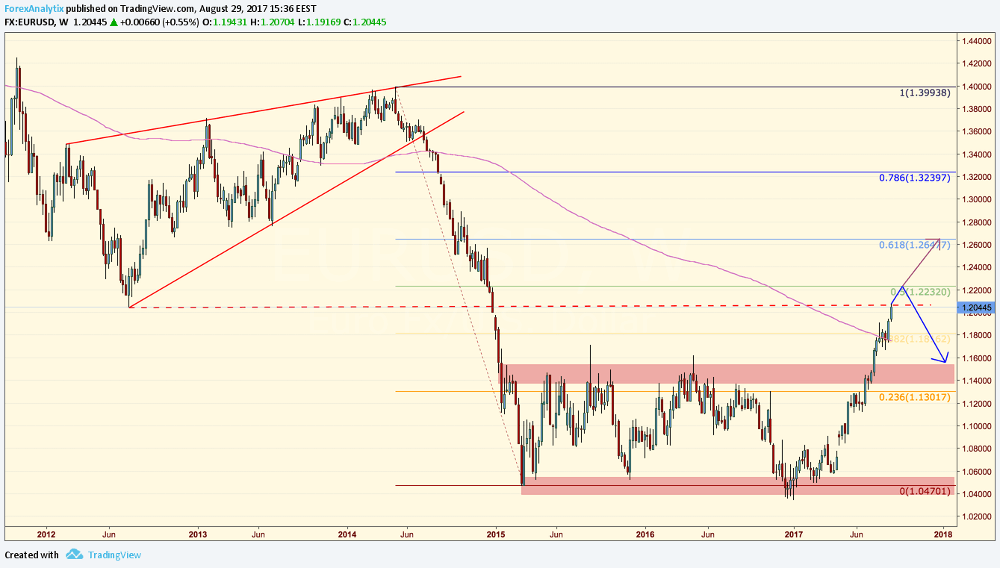 It’s undeniable that the Euro has had a stellar run in 2017. Looking into the fundamentals reasons behind this move however, it’s hard to identify solid reasons why its strength should persist significantly. Having said that, the trend is intact and momentum is strong. The EURUSD in particular is now at a crossroad that will dictate which way the next 500 pips are going.

From a macro viewpoint we think that it’s too late to enter long Euro positions. If strength continues further then the accumulation of short Euro positions will start making a lot of sense..

The EURUSD bottomed at the 1st day of this year (unsurprisingly since we have made plenty of mentions to the importance of seasonality) and rallied almost 17% since. During this rally it has broken above multiple resistance levels with the most important one being the confluence of the large descending channel that held it in a range since the beginning of 2015 and the horizontal resistance at 1.1450 (look at the weekly chart). Yesterday we popped above the 127% Fib from the last move lower (May 2016 to the low) and came near to testing the ascending T/L resistance that has guided the uptrend since March 2017 before turning around and posting a key reversal candlestick. Today's continuation is forming an evening star formation which adds credibility to the corrective scenario. The 1st support area is at 1.1730 which is the confluence of the broken bull flag resistance (expected to be support) and the ascending T/L support. As long as we trade above 1.1450 we expect the move lower to prove corrective. 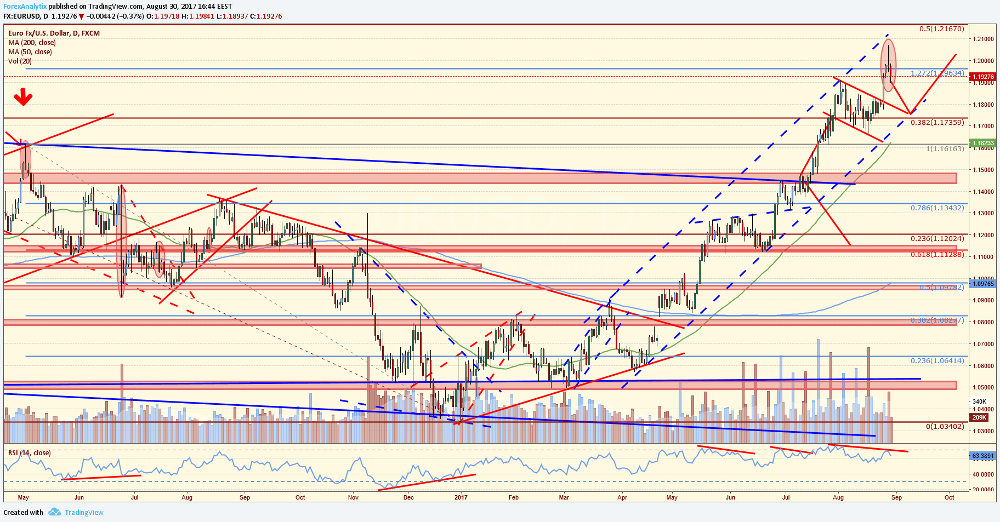 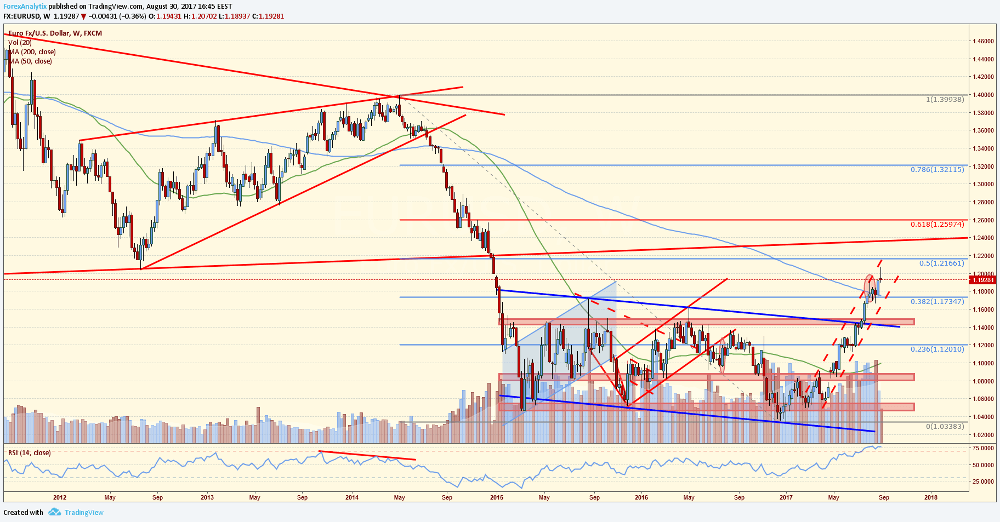