Speaking to a couple of knowledgeable sorts yesterday and a recurring theme emerged: what is true innovation? What is a truly impactful stock? Is another streaming app really ‘innovation’? Is another social platform going to make us more productive? (no!) There’s lot of fake innovation out there; hardware masquerading as software, software as AI. The Metaverse sounds crap. Expect more reality checks. ESG is going through a similar reality check. Cutting through all this fakery is not an easy task and wasn’t really required when the liquidity was abundant and the party was in full flow these last 12 years. Now the punchbowl has been removed and the mask has slipped.

On that note, downgrades, or at least price target revisions, are coming for Tesla. I call this a***-covering. Daiwa Securities analyst Jairam Nathan lowered his price target on Tesla to $800 from $1,150 while maintaining an outperform rating. This is less than a week after Dan Ives at Wedbush lowered his PT on Tesla to $1,000 from $1,400 and kept his outperform rating...reality is catching up with some of the most prominent Tesla bulls. Last week BNP Paribas’s EV World Cup left Tesla with no wins – competitors are already overtaking. The decline in the stock is entirely justified and the Street is playing catch-up. Ives on the situation last week: “While the Twitter situation in theory does not impact the Tesla fundamental story, the distraction risks for Musk (perception is reality) are hard to ignore at a time that the Tesla ecosystem have never needed Musk more with the worst supply chain crisis seen in modern history.”

Shares in Tesla declined almost 7% to $628, a new low for 2022. But it wasn’t the worst performing of the big holdings in ARK Innovation ETF. Roku fell almost 14%...needless to say Cathie was providing the liquidity, buying 231k shares for ARKK. Insiders meanwhile are getting out and she’s providing the off-ramp they need. She also bought 190k shares of Block as it declined 9%. Keep on doubling down...Zoom is now the number one holding at 9% of the fund.

Twitter AGM today is going to be interesting. Streams from 10am Pacific Time. Does the board just Musk all the way to signing or does he back out, get a discount? Shares are not priced for the deal to go through as it stands.

Tech fell hard yesterday on that Snap update. The reverberations were felt across global equity markets, but the Dow held up a small gain as the Nasdaq fell 2.5%. Snap itself dropped 43%, whilst Meta declined 7% and Twitter slid over 5% to under $36.

Hardware masquerading as software: Today’s Ocado update has all the hallmarks of the Target/Walmart earnings reports last week. Since its last update in March, management note how “the trading environment has deteriorated, as has been widely reported in industry data, with the cost-of-living crisis compounding the impact of a return to more normal consumer behaviours as restrictions have ended and many people return to the office”. The online grocery market has declined by around 20% compared with last year, they say. Shares are down 52% YTD and about 75% from the all-time highs.

M&S back in the black but a 1% rise in the share price is hardly covering the 43% decline this year. And despite the business starting to fire on more than one cylinder, a pessimistic outlook is hardly helping drive investors to pick up shares. “There is substantial inflation in both cost of goods sold and operating costs including fuel, power, building materials and maintenance ... Consequently, customers' spending capacity is under pressure. We expect these pressures to increase as the year progresses. We are therefore planning for an adverse impact on volumes due to price inflation, slowing the rate of sales growth.” Meanwhile it’s pulled out of Russia.

Retailers...looks tough given the consumer today but some pandemic momentum stocks doing well still – Pets at Home up 8% as pre-tax profits rose 40% on +15% revenue growth. I guess not everyone has kicked out their lockdown panic purchase pooches yet. Shares still down by a third in 2022.

SSE is today’s energy complex in microcosm: operating profits up 15% to £1.5bn but profits are its renewables business is down 22% quite simply because it wasn’t windy enough. Shares rebound almost 5% after taking a hit yesterday apparently on windfall tax fears and a downgrade at Citi to neutral from buy.

European stock markets nudged up in early trading on Wednesday, with shares in London and Frankfurt up around half of one percent. US futures are holding up ok this morning. E-minis here running into the trend resistance – watching for a break here as the descending wedge plays out...vicious bear market really or capitulation moment? Vix still not doing anything but hang around the 30 mark, evidence of no great downside fear but equally no surge in optimism...slow grind lower territory. 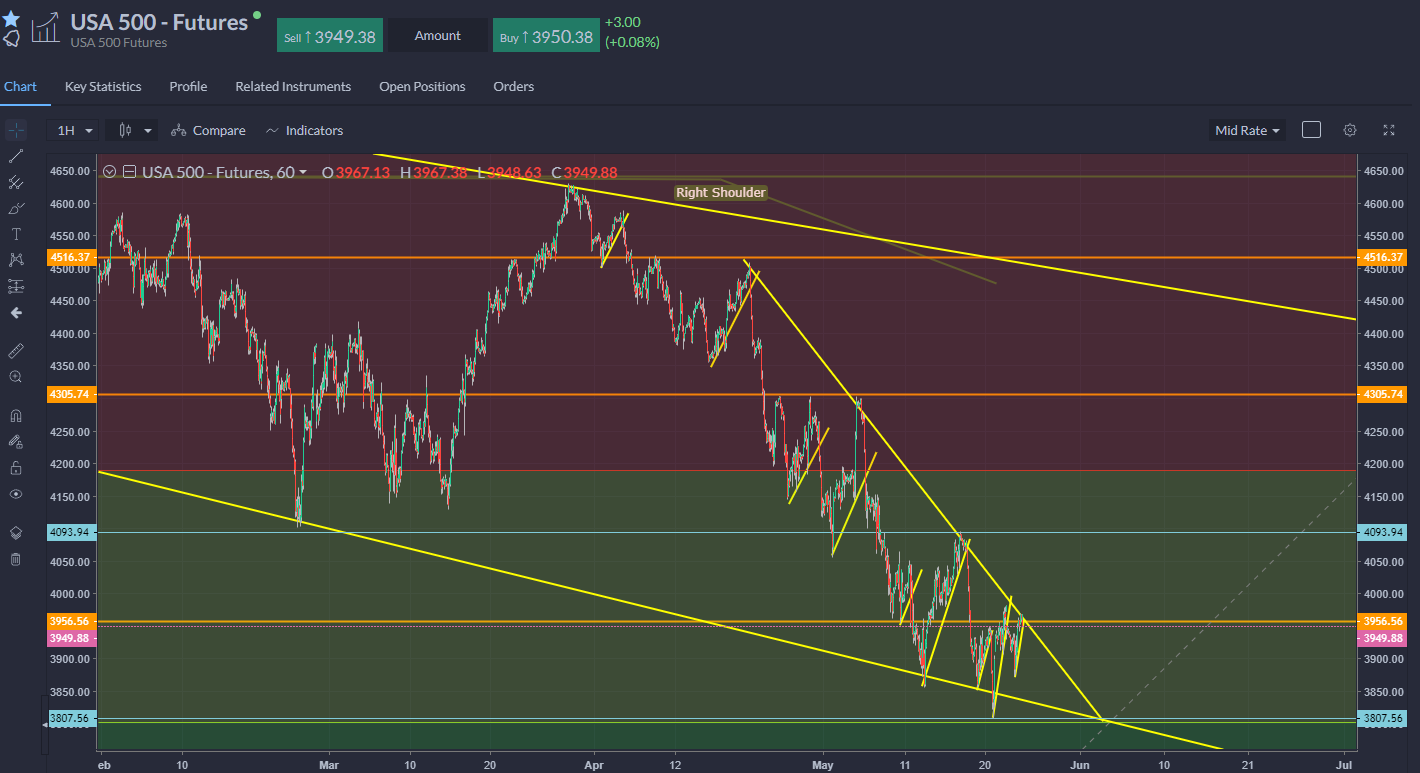 Yesterday, Atlanta Fed president Raphael Bostic suggested the central bank could pause hikes in September and cast doubt on back-to-back hikes of 50bps in June. Markets reacted by reducing the chances for a move in September. The Fed can be relatively happy for now that tightening is producing a relatively orderly decline in stock markets as opposed to a panic. But it’s still walking a very fine line. FOMC minutes are due today

Elsewhere, crude oil continues to hang around the $110 level even with Chinese lockdowns, a massive SPR release, a recession round the corner and a major sell-off of risky assets. Imagine where it can go after the ‘wall of worry’ (horrid phrase) crumbles...EIA inventories today seen at -2.2m after API reported a surprise build of 0.6m barrels. Gasoline and distillate inventories continued to fall amid a shortage of refining capacity just as the US enters the high-demand summer season.

In FX, the New Zealand dollar built on recent gains versus its US counterpart after the RBNZ raised rates 50bp to 2.0%, its fifth straight rate hike in a row and “agreed to continue to lift the OCR at pace” which was a hawkish surprise for the markets.

Sterling took a major hit yesterday as on some pretty dreadful PMI figures. Activity is slowing fast, hitting a 15-month low and the outlook is horrendous. It’s a horrible data set and traders are scaling back rate hike bets in its wake with the 2yr gilt down 14bps on the news before ticking up a touch along with sterling. Not a great setup for the pound but can still make headway as the long-dollar positioning is apt for further unwinding. Neckline of inverted head and shoulders at the 61.8% retracement of the longer-term move is the support/resistance for now. Looking for this to provide springboard for 1.2640 area even though macro setup looks so poor...bullish MACD crossover on the daily charts still in force. 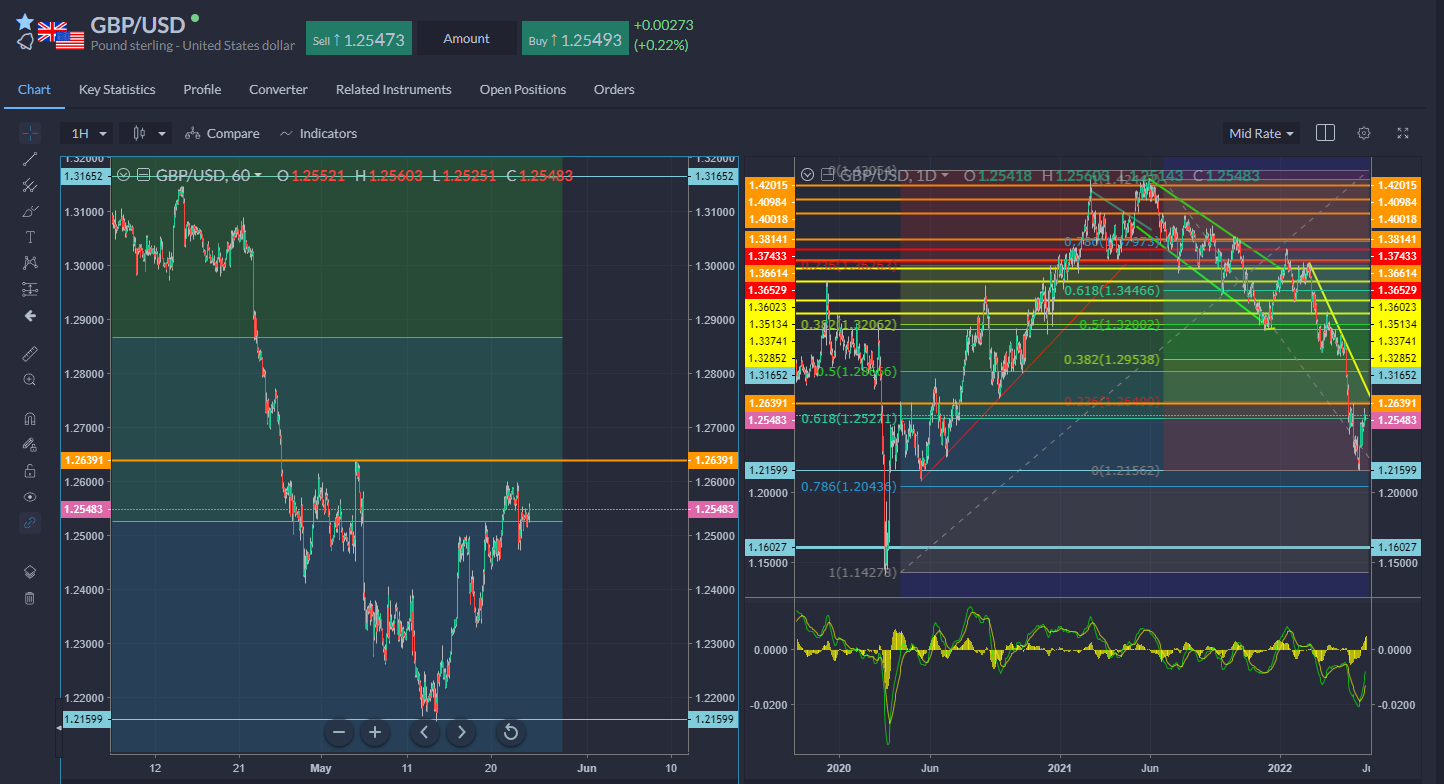 Safecap Investments Ltd (“Safecap”) is a regulated investment services firm, authorized the conduct its activities by the Cyprus Securities and Exchange Commission (“CySEC”) under license number 092/08. Safecap is also authorized by the Financial Sector Conduct Authority (“FSCA”) in South Africa as a Financial Services Provider under license number 43906. Safecap’s Head Office is located at 148 Strovolos Avenue, 2048 Strovolos, P.O.Box 28132 Nicosia, Cyprus. MARKETS.COM is a global brand and trademark used by Safecap and owned by FINALTO (IOM) LIMITED which is the immediate parent company of Safecap. Safecap and FINALTO are subsidiaries of Playtech Plc, a company traded on the London Stock Exchange's Main Market and a constituent of the FTSE 250 index. Safecap has the sole and exclusive use of the domain worldwide.

The above Cyprus contact details (as applicable) reflect the base where the person sending you this communication is located at. Where an international telephone number is provided, this is an additional communication option for your convenience.

This communication (including any attachments) contains information that is confidential and privileged. If you are not the intended recipient, please notify the sender immediately and destroy any copies of this communication. Unless expressly stated to the contrary, nothing in this communication constitutes a contractual offer capable of acceptance or indicates any intention to create legal relations or grant any rights. Safecap and the Markets Group at large monitor communications sent or received by them for security and other purposes. Any views or opinions presented herein are solely those of the author and do not necessarily represent those of Safecap or of the Markets Group. Nothing in this communication should be construed to constitute investment advice or an offer or inducement to buy or sell any securities.

Risk Warning: Trading Foreign Exchange and Contracts for Differences is highly speculative, carries a high level of risk and is not appropriate for every investor. You may sustain a loss of some or all of your invested capital, therefore, you should not speculate with capital that you cannot afford to lose.