Inflation reached its peak in June, but it doesn’t mean it will go away. The more persistent it is, the higher the odds of a rosy outcome for gold.

The August CPI report makes it clear: inflation has already peaked. As the chart below shows, both the overall and core CPI have reached their fastest pace in June 2021. The former index surged 5.3% four months ago, while the latter soared 4.5%. Since then, we have been observing very gradual deceleration in the annual inflation rates. 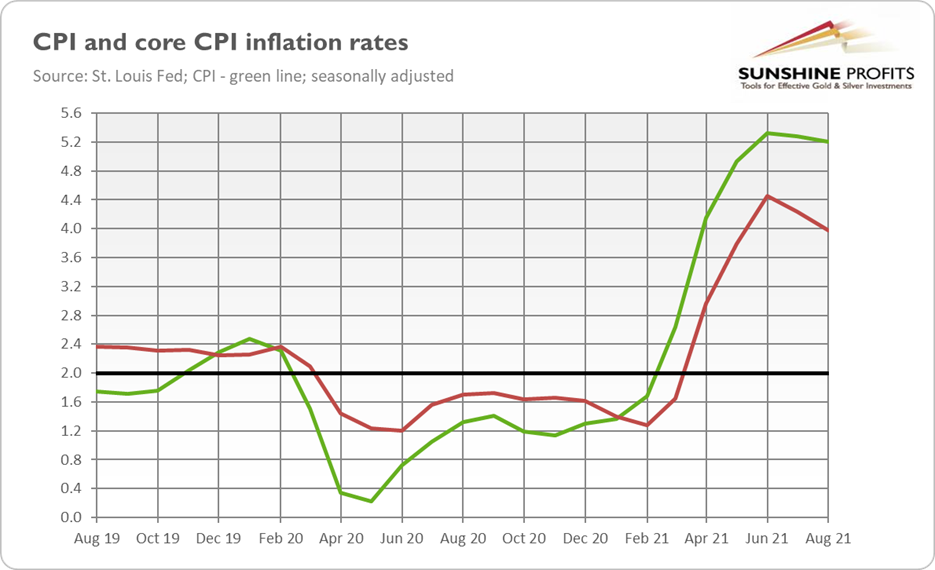 The noticed slowdown seems to confirm the central bank’s narrative that the inflationary surge is transitory. However, in a few past editions of the Fundamental Gold Report, I argued that the fact that inflation had peaked doesn’t mean that it would go away anytime soon. In particular, I pointed out the rallying Producer Price Index (as the supply-crisis is far from being resolved), the gradually rising index for shelter, and soaring home prices, which should translate into higher consumer prices in the future.

As the French adage goes, nothing lasts like the temporary. The policymakers always describe unpleasant developments as “transitory problems” (just think of all the taxes introduced only for a while!), as magical thinking that the troubles will somehow resolve themselves is much more convenient than confronting the harsh reality and taking decisive actions.

Of course, there is a grain of truth in the Fed’s line of thinking. After all, compared to the long run, not to mention the cosmological timescale, higher inflation will prove to be temporary. Yes, it was sarcasm, but Powell and his colleagues are, in a sense, right about transitory inflation.

You see, as the market saying goes, the cure for high prices is high prices. As you can recall from your economics 101 class, prices are set by supply and demand. And when prices rise, producers are willing to sell more, while consumers are willing to buy less. Hence, a surge in the price of a given commodity will result in reduced demand and/or boosted supply. As a result, the price will decrease. We have recently observed this mechanism in action in the lumber market. As the chart below shows, lumber surged during the post-pandemic recovery, doubling its price from February 2020 by May 2021, but now it’s just about 30% higher than before the pandemic. 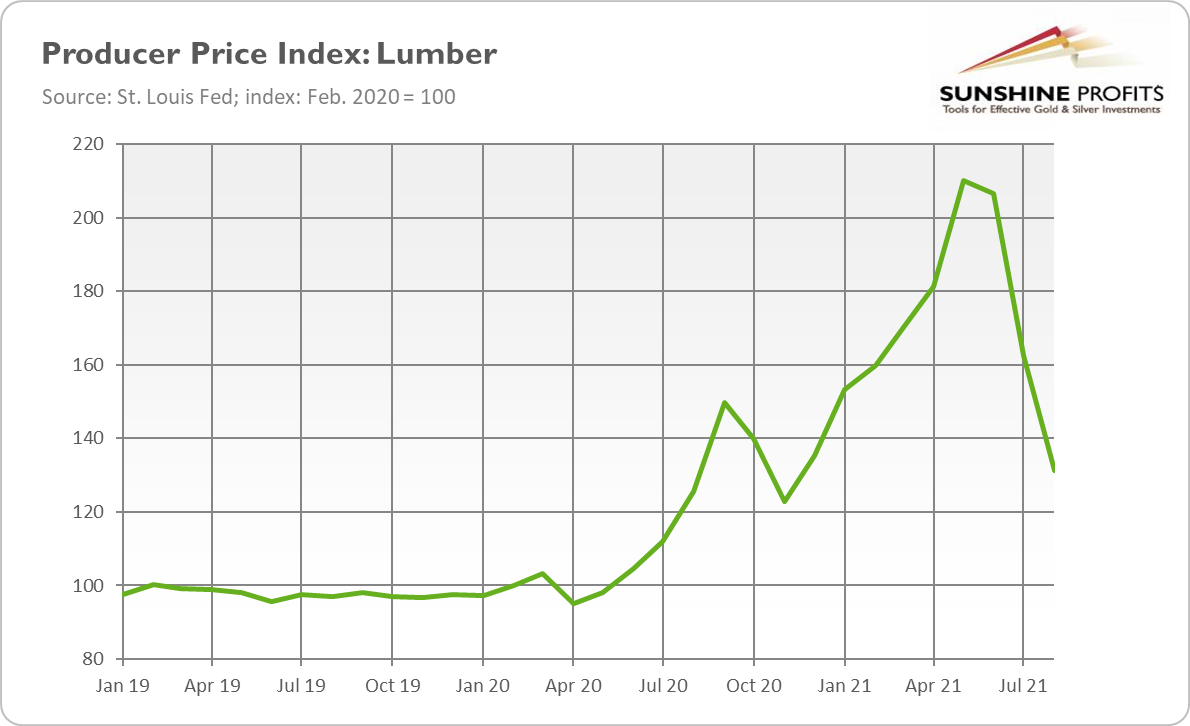 The chart doesn’t lie, does it? So, inflation is transitory, as high prices are indeed a cure for high prices. Lumber’s fate is what’s waiting for all goods. But not so fast. This mechanism works only under certain conditions. It clearly doesn’t apply to hyperinflation, where surges in prices cause a decline in demand for money (consumers lose faith in a currency and try to spend their money as quickly as possible) and, in turn, even stronger price surges.

Even more importantly, it applies only to market-specific supply issues, not to the general, economy-wide inflation. When higher prices are a result of idiosyncratic supply constraints, the market forces will work to bring the equilibrium back, curbing the price. For example, the producers of lumber could have outbid other entrepreneurs to obtain necessary inputs and expand their capacity to eliminate the shortage of lumber. However, when almost all prices go up, the situation is different, as all entrepreneurs cannot expand their capacities at the same time because all the inputs are scarce.

Why do we know that the current inflation is broad-based and also demand-related rather than caused merely by supply disruptions? Well, the obvious clue is simply the number of markets that are experiencing shortages and sharp price rallies. The supply-chain crisis is not limited to lumber and semiconductors, it covers practically all commodities and many intermediate goods.

In such a situation, the root cause of inflation must be excessive demand compared to supply. As I explained earlier in the Gold Market Overview, the consumer expenditures on goods surged 15% over the pandemic. Such an increase over a relatively short period turned out to be difficult to handle by entrepreneurs, especially under epidemic conditions, thus shortages emerged. But these supply-chain problems are ultimately demand-driven, as the supply-side of the economy simply cannot satisfy the consumers’ demand.

To be clear, this extra demand hasn’t emerged out of nothing. It’s happened due to a shift in expenditures from services into goods and also because it’s the child of the Fed’s easy monetary policy and lax fiscal policy. The broad money supply is about 33% greater than it was before the pandemic (see the chart below). The widened fiscal deficits financed checks to Americans, which made inflation less limited only to financial assets and more broad-based. 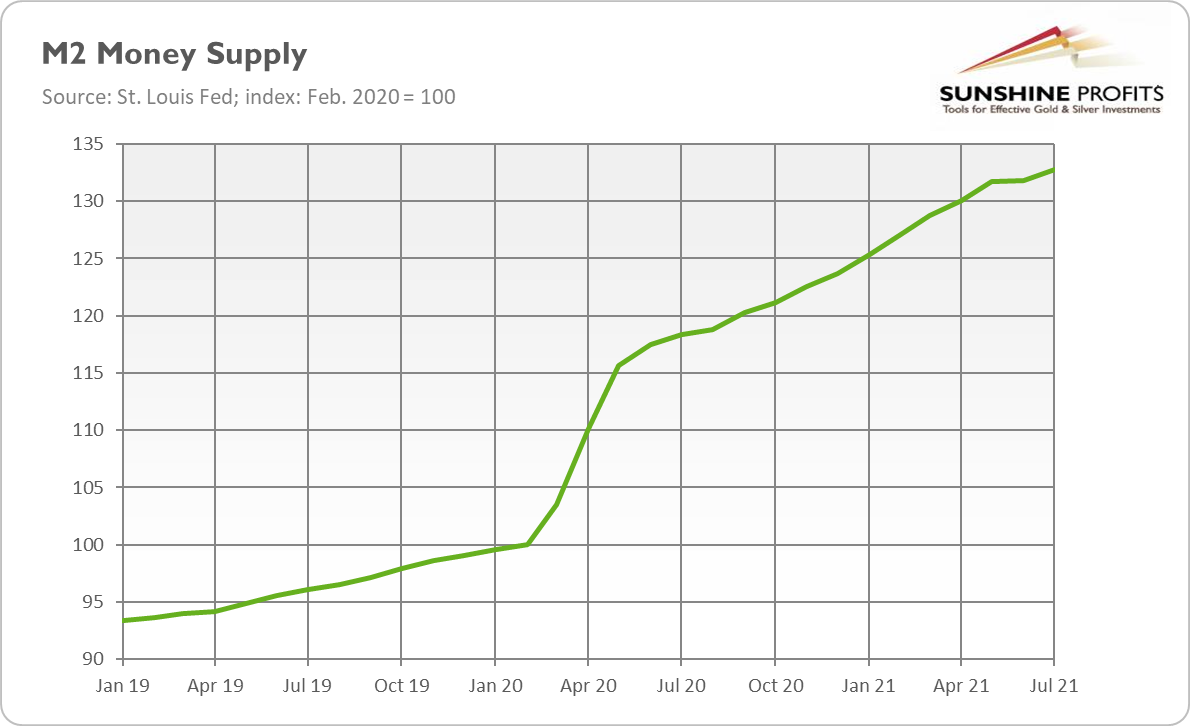 What does it all imply for the gold market? Well, the point is that the current inflation is more demand-driven than the Fed is ready to admit. As a result, my bet is that it will be more persistent than the central bank officially claims. More stubborn inflation may accelerate the Fed’s tightening cycle, which would hit the gold market.

On the other hand, persistent inflation could at some point rattle the markets, boosting the demand for gold as a safe-haven asset and an inflation hedge. High inflation also implies subdued real interest rates, which should support gold prices. Last but not least, the more persistent elevated inflation is, the higher the odds of inflationary expectations de-anchoring and stagflation taking place, in which gold should shine.