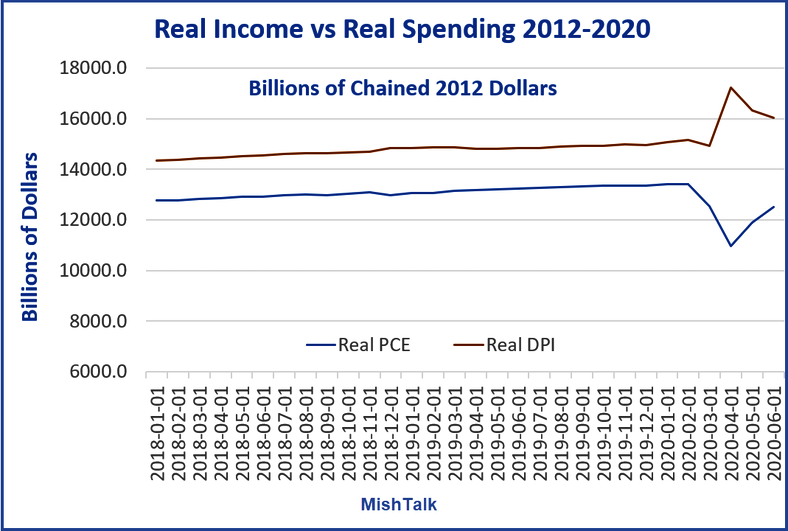 Since Covid hit, the stable relationship between income and spending broke down. 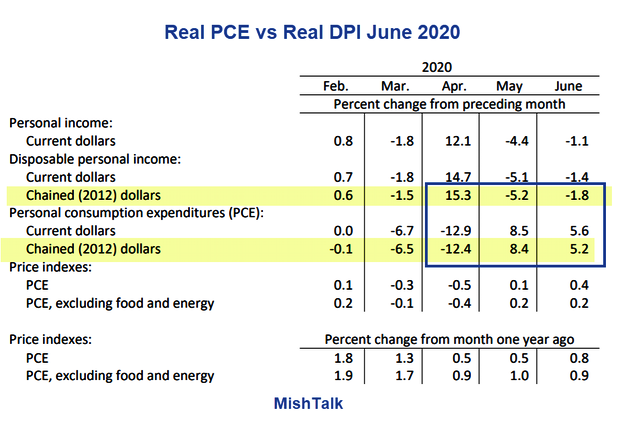 The answer is Economic Impact Payments.

Taxpayers with higher incomes in 2020 will see any overpayment associated with their rebate forgiven.

Those $1,200 checks packed a wallop because they went out whether or not anyone was impacted.

In contrast, the $600 weekly checks more than made up for lost income for some people, but others lost income.

That depends on Congress and President Trump, assuming Trump would sign any bill Congress passed.

As noted on Sunday, the Clock Just Ran Out on $600 in Weekly Unemployment Benefits. 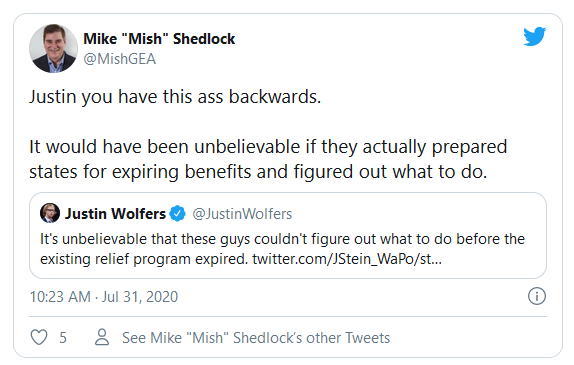 "So Far Apart on Covid Deal That We Really Don't Care"

On Friday, Congress Left Town Without a Coronavirus Stimulus Deal.

In dueling press conferences, White House Chief of Staff Mark Meadows laid into Democrats for rejecting a short-term deal to continue the bolstered unemployment benefit for one week, while House Speaker Nancy Pelosi railed against Republicans and the Trump administration for attempting to take a piecemeal approach to helping Americans as COVID-19 cases continue to surge nationally.

On Thursday a group of Republican Senators Proposed $1,000 Stimulus Checks.

In order to qualify, both adults and dependents would need valid Social Security numbers. Under the bill, a qualifying family of four could potentially receive $4,000 — $600 more than they received in the CARES Act.

The payments would be more generous than the first checks, according to the Tax Foundation — $1,584 on average versus $1,523 on average in the first round.

The thresholds at which the checks would phase out would be slightly lower than the first round, according to the Tax Foundation. Individuals with income above $95,000 would not receive payments, rather than the $99,000 cut off in the CARES Act. Those who are married and filing jointly would not receive checks for income over $190,000, down from $198,000 in the first round.

Economically, I fail to see the merit in sending $1,000 checks to those not impacted.

I suppose Republicans figure that free money for those not impacted benefits them more than the Democrats.

In regards to the rest of their proposal, it does make sense that people should not make more being unemployed than employed.

The problem is that it could take weeks or longer for states to program that idea. Meanwhile benefits have already run out.

Philosophically, people should not make more being unemployed than employed.

Politically speaking, the Republicans just stepped on a landmine.

The irony in the bickering is that the economy would do better (and therefore Trump's reelection chances) the greater the stimulus.

They are fighting their own best interests for the sake of budget principles they never adhered to before.