The United States Dollar has been getting hammered for almost all of 2020, the economic dominance that they have held onto for so long is not doing the currency any favors now. One only has to look at a chart of the Dollar index to see its lackluster performance, its even starting to present the early markings of an oversized resistance pattern on a Monthly chart. 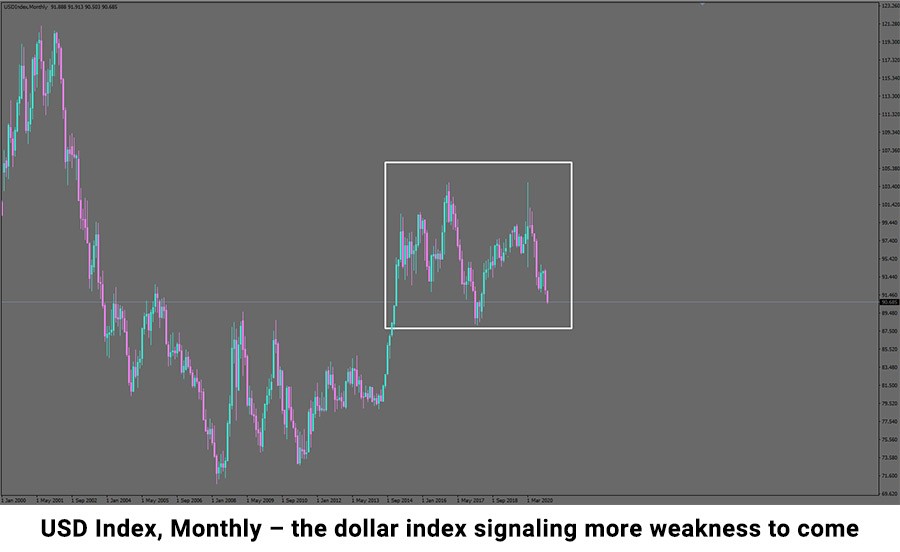 You can see pretty clearly while not a perfect resistance pattern and certainly not fully formed, there is the semblances of a double top beginning to form. When it comes to these patterns if I have to look at the chart over and over to really pick it out, then its not the trade I want, I like them clear and obvious. While this one is kind of in between both of those descriptions its also not fully formed.

I’m not into technical indicator’s much but occasionally will have a brief look to satisfy my own curiosity. In this instance I’ve put on a linear weighted 200 moving average nothing fancy!

I could implement trend lines and anything and everything else that might fix the quick itch that I have for technical but it’s pretty obvious, longer-term pain for the US dollar will be coming for years.

The US is going to be operating in a diminished compacity with monstrously sized budgets and trade deficits, an ongoing symptom of the larger issues faced through out 2020. This is just one element of the scaring we are likely to see the for the US economy, with many of the cuts still not identified still.

Its no wonder investors have been seeking alternative havens to park their money in the absence of the US dollar. The question remains though how low can the US Dollar go? Given the potential for enormous fiscal and monetary pump ups, id say much further to come still.