The elephant in the room needs to be addressed, which is the movement in the price of Gold over the past couple of months. It all started back in August where the Yellow Metal recorded an all time high of $2,075 before beginning a steady decline. Several reasons can be attributed to this decline, the first and foremost is the overbought conditions that Gold has been experiencing due to the Coronavirus pandemic and everyone’s flight to safety.

The other and more important reason is that vaccines are finally being made and that means we are one step closer to beating this virus once and for all. This has issued wide spread euphoria in the market as we saw all matter of risky instruments increase in value meaning that Gold is losing in value. Over the course of the past few months, Gold has been in a steady decline with the $1,850 acting as a solid support since the decline back in August.

It was only recently that Gold’s bearish pressure grew in strength and caused that support level to crumble. The decline continued to force itself on the precious metal until it reached the $1,800 level before the Bulls managed to step in and halt the decline any further. From that level on, a small move higher can be noticed but it’s still in the early stages of any kind of recovery.

The Rise of Vaccines

A Coronavirus vaccine developed by the Oxford University and British-Swedish bio-pharmaceutical company AstraZeneca showed an impressive 90% effective rate in preventing the disease. This marks a third promising vaccine candidate in November, following Pfizer and Modena. A key advantage of the Astra-Oxford vaccine is its relatively low cost – at £3 a dose – compared with more than £20 for the Pfizer and Moderna vaccines. This means it might be a lot more affordable for emerging countries, especially those who face public health funding shortages.

A string of vaccine breakthroughs may point to less reliance on fiscal stimulus if they help to expedite the pace of economic normalization. Gold prices are particularly sensitive to stimulus prospects and the interest rate environment as gold is commonly perceived as a good store of value and hedge against fiat money. Since Pfizer first announced its vaccine news on November 9th, gold prices have fallen over 6.5%.

The U.S. elections results have finally been approved with Joe Biden being the winner and becoming President-Elect. In addition to that, the current incumbent President Trump has conceded and called for his administration to cooperate with Biden’s transitioning team in order for things to be heading to a close.

With Biden in office, many things will start to change when it comes to the fiscal management part of the country. Furthermore, the President-Elect has nominated the former Fed Chair Janet Yellen as his Treasury Secretary, a position in which she may play a critical role in influencing US fiscal and tax policy to foster economic recovery and tackle inequality issues.

This means that the price of Gold will also be affected heavily by what Yellen decides to do with regards to taxes and stimulus. Not to mention the previous soft-dollar policy which the Trump Administration has been achieving, all of this will surely have an effect on gold. It’s still too early, though, to tell which way it’ll actually go.

From a Technical point of view, Gold is facing massive downward pressure that doesn’t seem to be letting go without a fight. The current support at $1,800 will be incredibly important for Bulls to keep, otherwise we might be facing another big downward move, the yellow metal that might leave it back where it started around the $1,600s.

In order for the Bulls to say that they still have a fighting chance, they need to break above the current resistance at $1,840. If the Bulls manage to pull that off, we might see another bounce in Gold, not enough to return back to the previous highs, but just enough to make sure that the current value doesn’t fluctuate all that much. 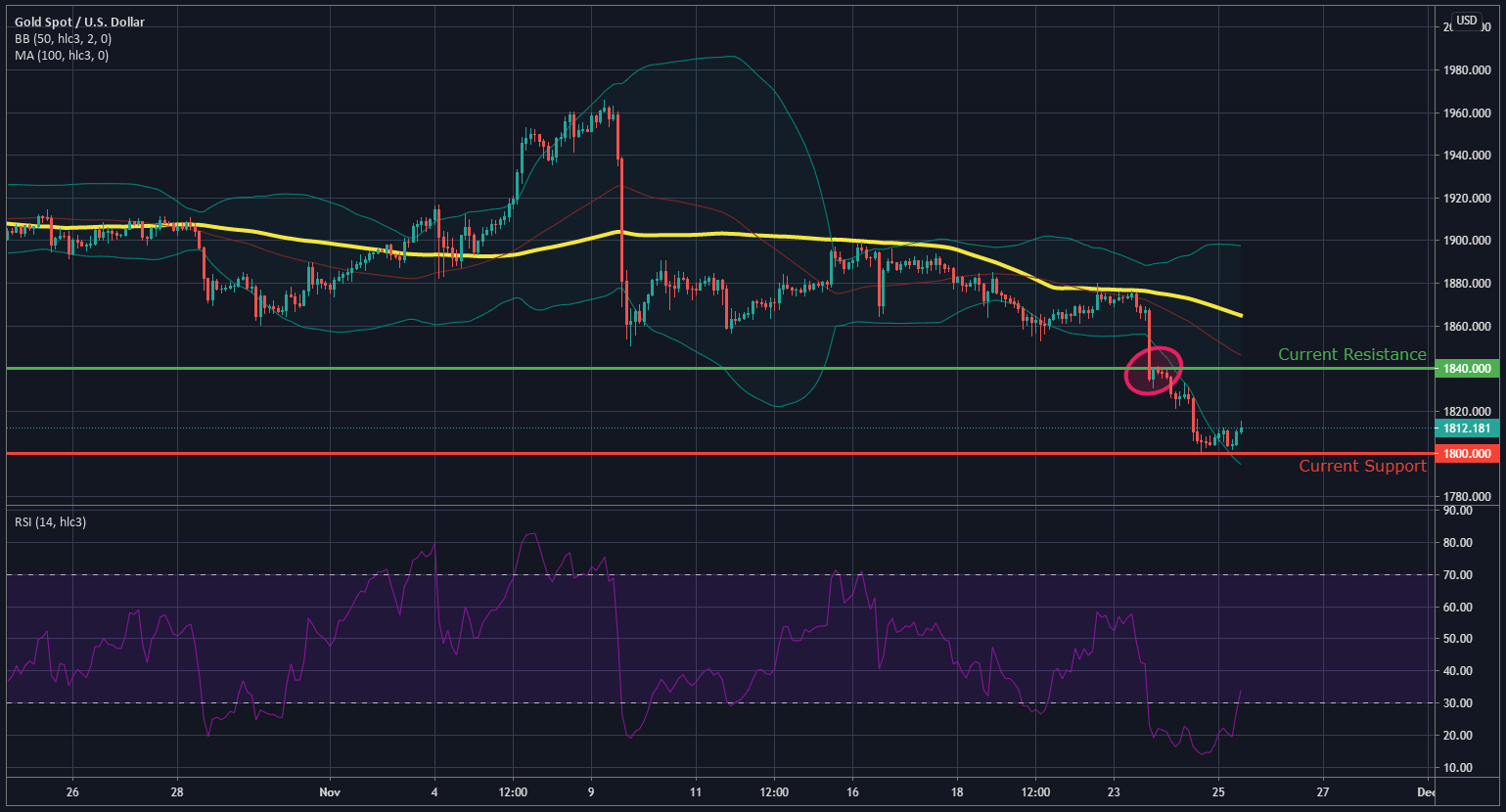 The RSI (Relative Strength Index) also tells us a unique point of view. The current downward pressure has ended the indicator in the oversold territory (on the 2-hour chart) and seems that the current movement higher is because of that. But when you couple that with the bounce from the $1,800, it gives some importance to the movement. With that said, we can estimate that the 50 level on the RSI corresponds roughly to the $1,835 level on the price chart and that a movement above that level could mean some consolidation in the future of the precious metal.