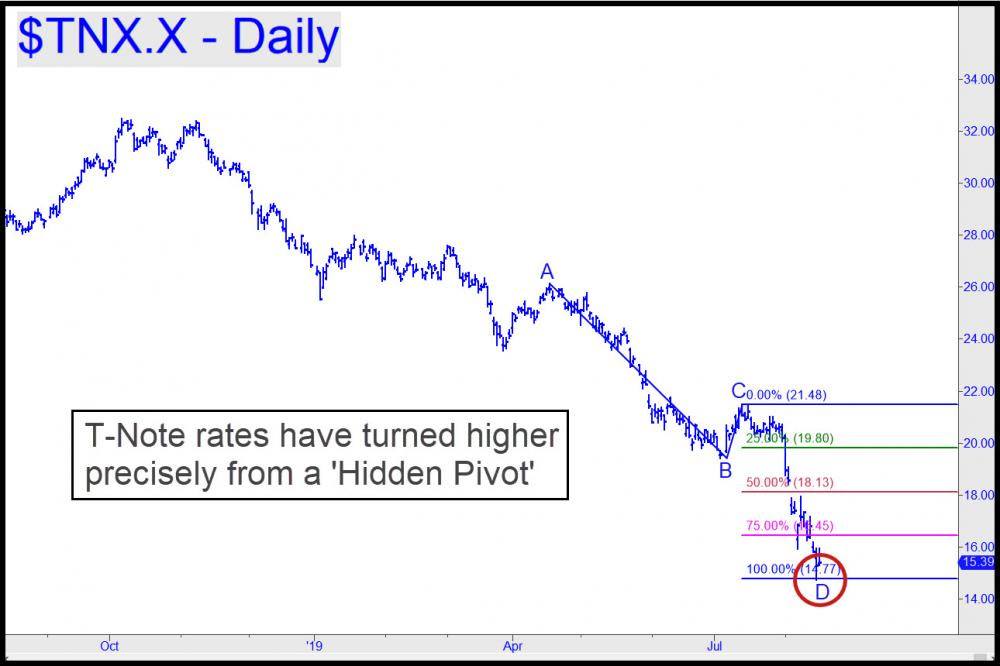 Are rates on the Ten-Year Note finally bottoming? Quite possibly, according to technical indicators that we monitor closely. T-Notes touched a low last week of 1.47% after plummeting almost relentlessly from 3.49% last November.  GDP was running at around 3% back then, and almost no one other than a few hardcore deflationists, your editor among them, saw rates on the Ten-Year falling below 2%.  Now, however, given the look of the charts, it would be wise to prepare for a possible rate rebound, even if it proves to be temporary.

By our runes, a bounce from these levels would be logical because last week’s low occurred almost precisely at a Hidden Pivot target first aired here some time ago. It was one of a series of lows forecast by Rick’s Picks in 2019. The chart shows how rates bounced last Thursday from within 0.02 points of the 1.47% target. The Hidden Pivot support whence the bounce occurred clearly worked, but that doesn’t necessarily mean it will hold indefinitely. In fact, given the clarity of the pattern associated with the support, if TNX were to decisively breach it in the next few days, that would strongly imply rates are headed significantly lower in the weeks and months ahead.

Meanwhile, some of Wall Street’s best and brightest, having missed the huge rally in Treasurys, which produced capital gains of 15% or more for the few who saw it coming, are now venturing boldly forth to proclaim it is over. Some Investors Are Betting the Flight to Bonds Is Overdone was how The Wall Street Journal headlined their belated change of heart. We’re inclined to bet with them for the time being, albeit with less bravado, shorting Treasurys and going long on yields. But to repeat: If TNX, which tracks rates on the Ten-Year, were to close below our 1.47% target for a couple of days or trade decisively below it intraday in the next week or so, we’d take our bet off the table, pronto.