Italian polls are often unreliable, but these results are unusually clear and stable. 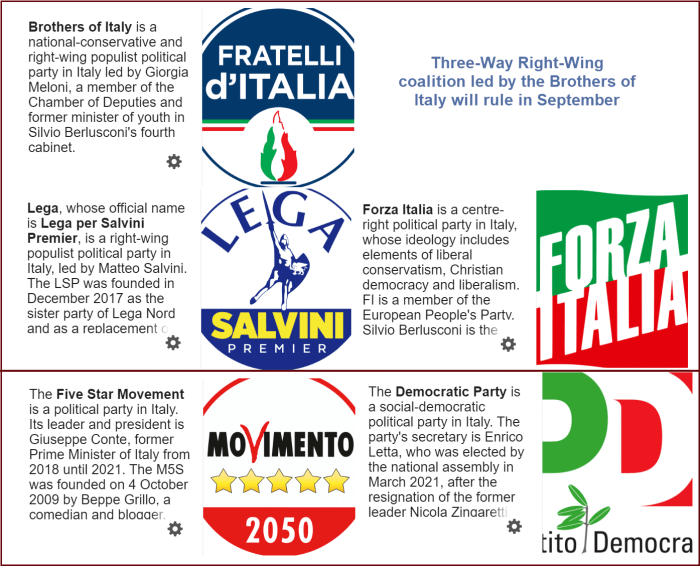 Images from Wikipedia, annotations by Mish

The September election was triggered when the Five-Star Movement (M5S) refused to support Prime Minister Mario Draghi, in Parliament.

Draghi is a compromise technocrat rather than an elected leader.

The Italian president is largely a political figurehead except in matters like these.

A 46.2 to 34.3 lead is insurmountable by Italian election rules.

An alliance led by Giorgia Meloni’s far-right Brothers of Italy, which includes Matteo Salvini’s League and Silvio Berlusconi’s Forza Italia, has a wide lead in opinion polls ahead of the September 25 general election. If other forces are divided, this might lead close to a two-thirds majority in both houses of parliament, according to an analysis by Youtrend/CattaneoZanetto & Co.

This result would see the right score similarly to Hungarian leader Viktor Orban, who won a large majority in 2010. But reaching a two-third majority would be difficult for the coalition and the study’s main scenario is for a right-wing coalition falling short of the two-thirds threshold.

Achieving a broad majority large enough to change the constitution would be unprecedented in Italy’s recent history and could have a profound impact on the country’s political system.

All three leaders of the right-wing alliance have called in the past for the president to be directly elected by Italian voters, instead of by lawmakers and regional representatives as is currently the case. This would require changing the constitution.

The right-wing bloc could get as many as 271 seats out of 400 in the lower house, and 131 out of 200 in the Senate. That’s in a scenario in which the center-left Democratic Party doesn’t ally with the populist Five Star Movement, or with groups such as Matteo Renzi’s Italy Alive. This scenario doesn’t take into account six senators appointed for life.

The survey maps a recent Quorum/YouTrend poll to recently-redrawn electoral districts. It highlights up to 67 swing seats in the lower house and Senate, which could prove decisive in turning a right-wing majority at the ballot box into a landslide victory in parliament.

These numbers are close enough to make a super-majority very plausible.

Populists at the Gate

With Mario Draghi on his way out, Europe braces for the most radical right-wing government in Italy’s republican history.

Polls suggest that the post-fascist Brothers of Italy party has a good chance to come out on top in a general election slated for the end of September, with its leader, Giorgia Meloni, close to becoming Italy’s first far-right (and first female) leader since the end of World War II.

And she’s not alone. Meloni is running as part of an alliance with Matteo Salvini, the leader of the far-right League, and Silvio Berlusconi, the former prime minister and head of the conservative Forza Italia; the combined right-wing front is expected to snag about 45 percent of the vote—enough to secure a comfortable majority of seats in Parliament.

The prospect of a hard-right government in Rome with strong populist and Euroskeptic undertones comes as EU leaders seek to maintain cohesion of the 27-nation bloc, coordinate their response to the ongoing Russian invasion of Ukraine, deal with a looming energy crisis caused by Moscow, and tackle skyrocketing inflation.

The uncertainty over how exactly Italy’s right-wing coalition would position itself on all those issues has many in Brussels worried, said Arturo Varvelli of the European Council on Foreign Relations (ECFR). “There is great sorrow over the loss of Mario Draghi,” he said.

Brussels has already been dealing with right-wing governments in Budapest and Warsaw that have challenged the bloc’s legitimacy and sparked increasingly bitter showdowns over the judiciary, rights, and democracy. Meloni, while rejecting the far-right label, seems birds of a feather with the Hungarian and Polish leaders. Her party has strong links with Italy’s post-fascist tradition, and her views include securing borders against “mass immigration,” defending Europe’s “Christian roots,” and battling the “LGBT lobby.” Meloni also wants the EU to stop interfering with the “sovereignty of the peoples” and has sided with Poland and Hungary in their ongoing row with Brussels over their democratic backsliding. Salvini has long railed against “Brussels bureaucrats,” while Berlusconi famously shocked the European Parliament when, in the middle of a plenary, he suggested that its future president, Martin Schulz, was fit for a movie role as a Nazi death camp guard.

Forza Italia has pledged to raise pensions, while the League has promised an early retirement scheme and a wide tax amnesty.

This setup has huge political and economic potential consequences.

With a super-majority the upcoming government could change the constitution.

This could also mean a change towards how the president is picked or even leaving the Eurozone.

A Eurozone breakup would be catastrophic for the Euro and even worse for the Italian Lira fallback.

Alternatively, threats from Italy could push Germany into supporting debt comingling. But that would require a change in the German Constitution.

At a minimum, a government led by Giorgia Meloni will be another big thorn in the side of the EU.

At the expected percentages, this government rates to be very stable, an unusual setup for Italy.

Mario Draghi's famous speech as prior head of the ECB is back in play.

"Within our mandate, the ECB is ready do whatever it takes to preserve the Euro. And believe me it will be enough," said Draghi as ECB head.

The statement alone was all it took to end the peripheral eurozone bond crisis. Bond yields in Greece, Italy, Portugal, and Spain crashed.

"Super Draghi", as he was soon called, is super no more.

Statements alone will not work this time. Greece and Italy are orders of magnitude different in importance.

So, what will ECB president Christine Lagarde do for an encore? 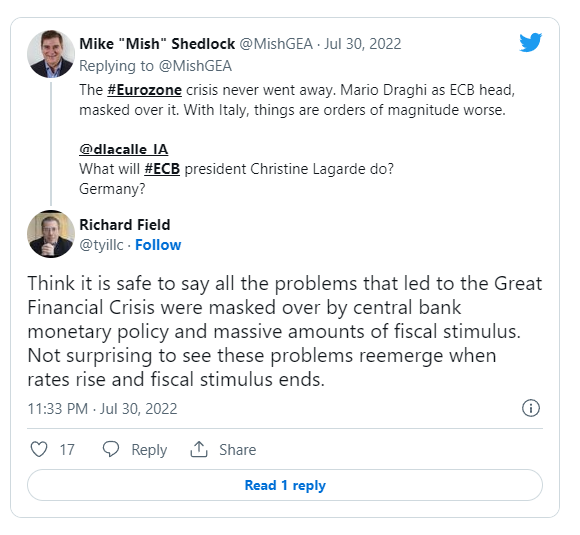 Lacalle replied Lagarde will do the same as Draghi. That led to this conversation. 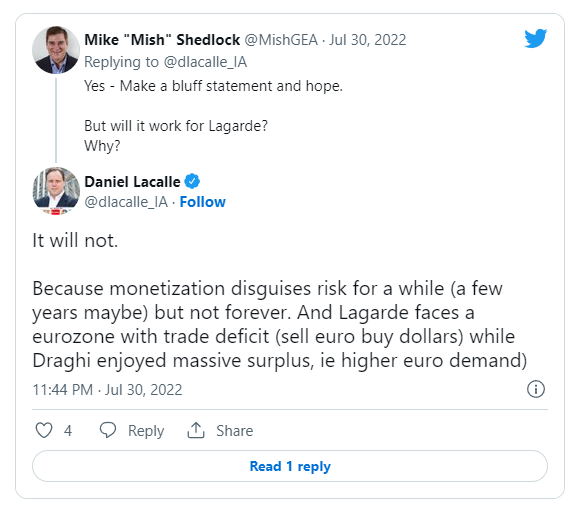 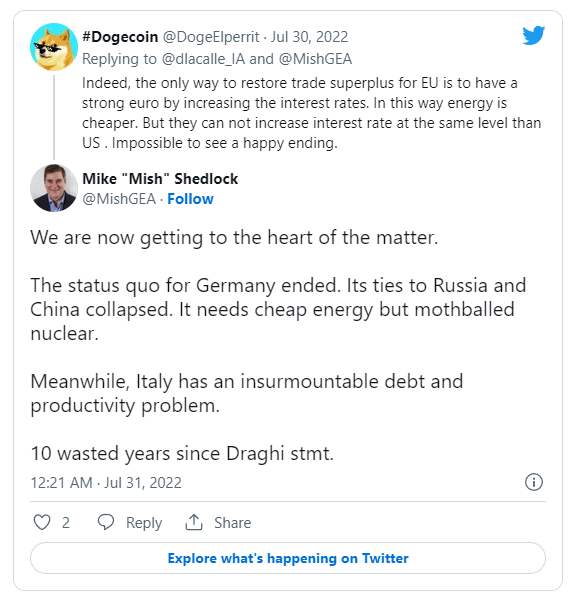 The Ramifications of Never 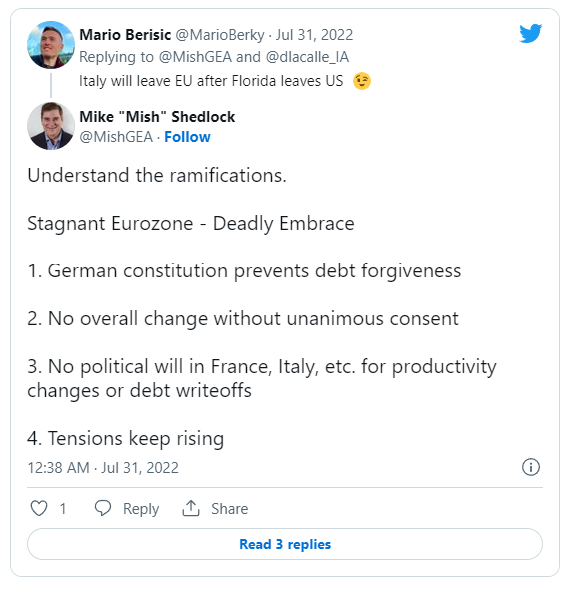 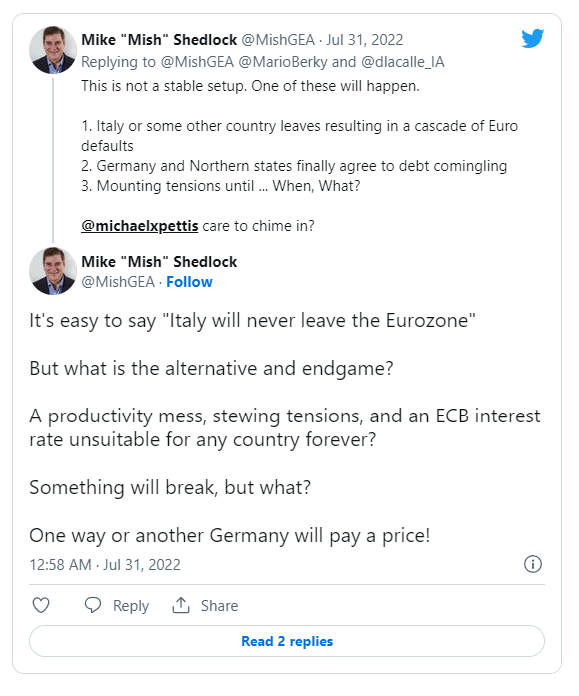 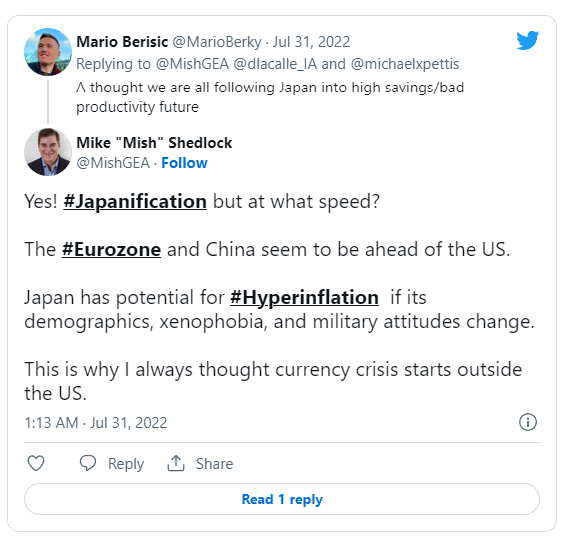 We may very well be headed for a currency crisis starting in the Eurozone. For years, most thought it would start in the US. Not me.

I do not know if this is it or not, but the possibility is huge.

For further discussion of the possibilities, please see End of the 40-Year Bull in Debt and a “Global Depression” Threat