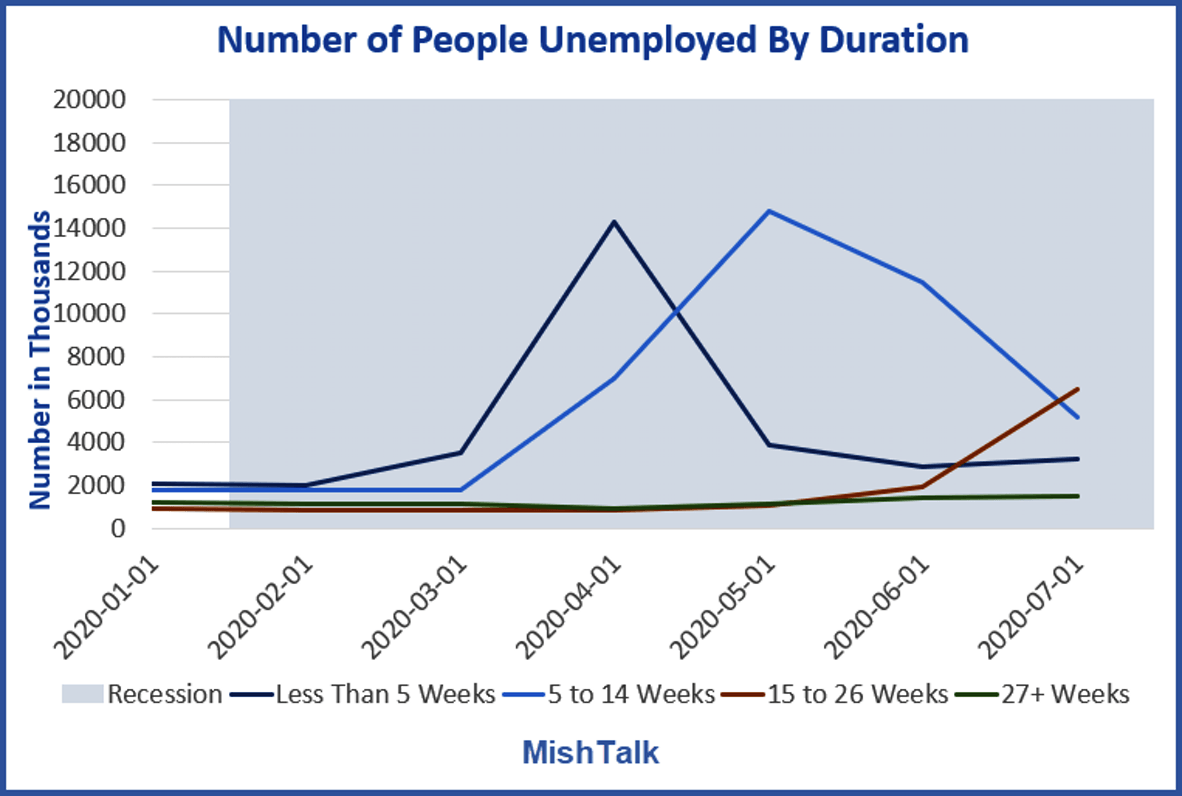 Here's a series of charts showing the duration of unemployment followed by a comparison to what happened in the Great Recession.

The chart shows a sharp decline in the number of people unemployed 5 weeks or less.

Unfortunately, that was accompanied by a sharp rise in the number of people unemployed for 5-14 weeks.

Then the number of people unemployed for 15-14 weeks took a sharp decline.

Now, the the number of people unemployed for 15-26 weeks is sharply rising.

Percent of people unemployed by duration 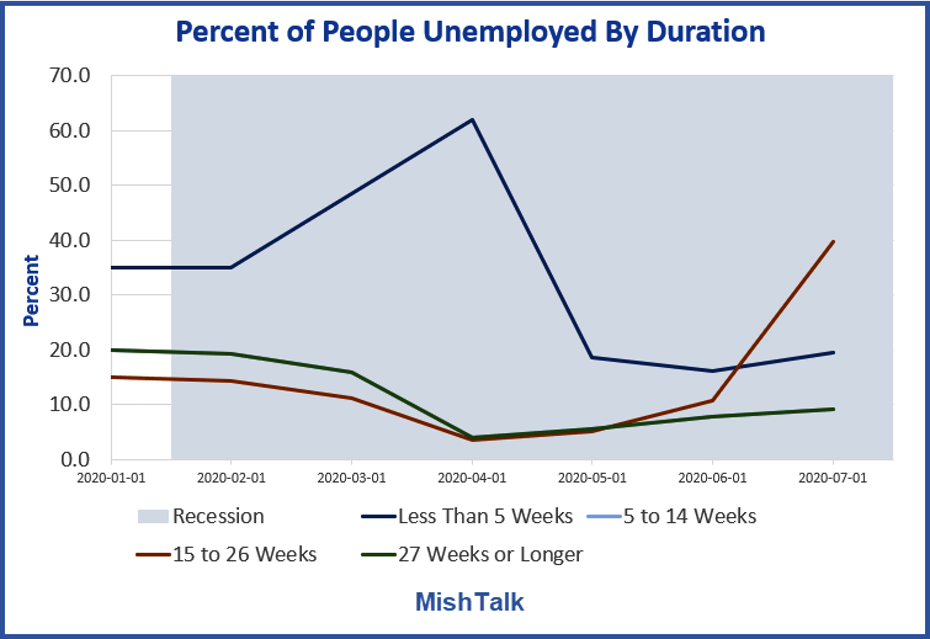 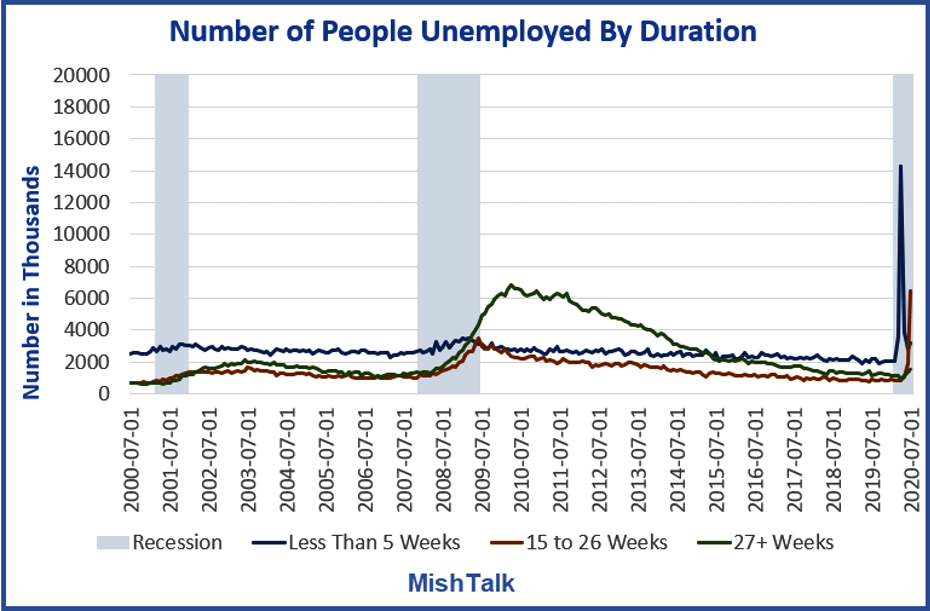 That red line is very ominous. Let's hone in on what happened during the Great Recession to see why.

Unemployed by duration during and after the great recession 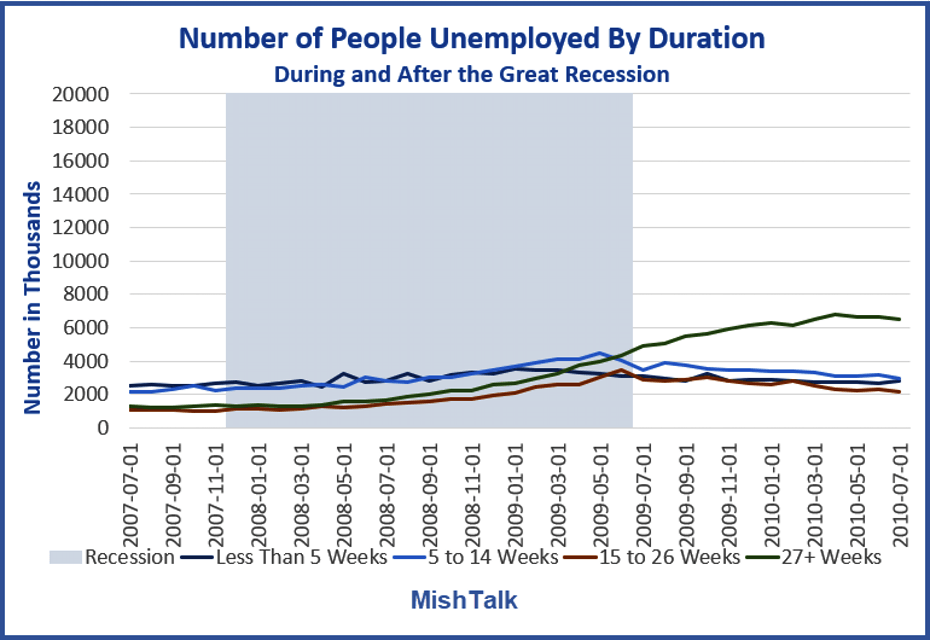 Once people hit 15 weeks of unemployment they stayed unemployed for 27 weeks or longer.

If the unemployment trends follows the path of the great recession we will easily have over 10 million people unemployed 27 weeks or longer by the time this mess clears up.

That is not a prediction, it is an observation based on current data.

I do have one prediction and it is not a pretty one.

The number of people unemployed 15-26 weeks is nearly guaranteed to rise in the next jobs report and perhaps the next several jobs reports. Continued claims shows why. 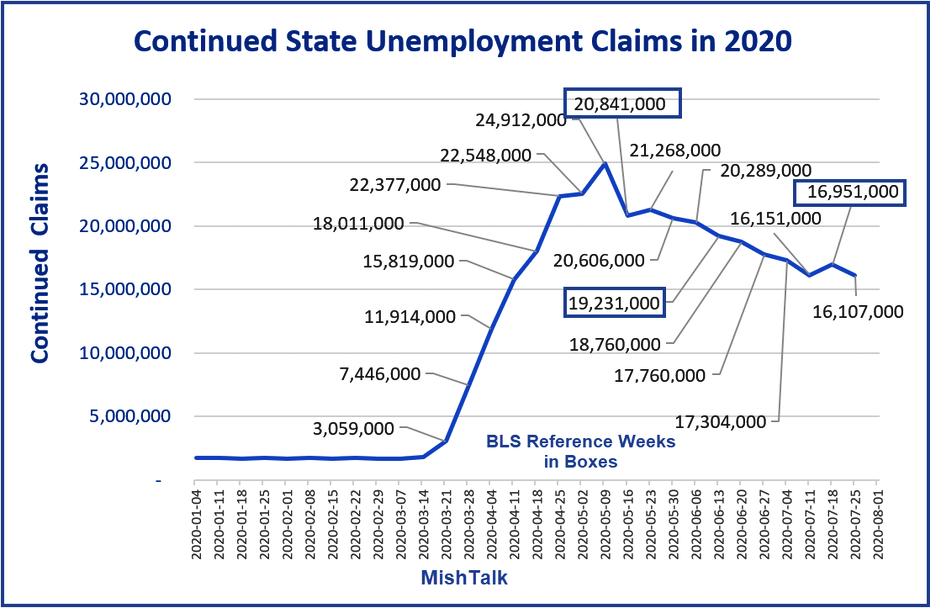 That was nearly month ago. Continued claims have proven to be stubborn.

Another 4 weeks will pass between jobs reports. So potentially millions more will will roll into the 15-26 week category from the 5-14 week category, now in a steep decline.

If the number of people rolling into the 15-26 category is 1,500,000 or greater, which seems likely, the next jobs report will show 8 million or so people unemployed 15-26 week.

Then in two months, those unemployed 27 weeks or more will start ticking up rapidly.

Heaven help us if unemployment 27 weeks or longer continues for a year after the recession ends.

But that is what happened in the Great Recession.

Panic at the Fed

Yesterday, I noted Yet Another fed president supports more free money and a covid lockdown

Two of them support hard lockdowns of at least 4 weeks.

If that remotely sounds like panic, it's because it is panic. The Fed is not in control.

It is only an illusion that they ever were.

Gold has responded and rightfully so.

For discussion, please consider Gold soars to new high above $2000 while managed money sat it out

What about the US Dollar? I am, glad you asked.

AUD/USD extends Friday’s downbeat momentum towards the 0.7700 threshold at the start of Monday’s Asian session. The Aussie pair declined the most since late October the previous day as the US dollar benefitted from the risk-off mood.

GBP/USD fails to keep the uptick beyond 1.3606 during the initial Asian trading on Monday. The cable dropped to the lowest since January 12 on Friday but couldn’t slip beneath the 100-bar SMA.  The rising wedge formation on ...