As Brexit uncertainty and no deal Brexit risks hit orders, the same time the economic outlook is deteriorating in UK. Yesterday, the UK August production data disappointed, contracting 0.6% m/m and by 1.8% y/y in the broad industrial output measure. The narrow manufacturing production contracted by 0.7% m/m and by 1.7% y/y, some way off median forecasts.

Meanwhile, last week we also saw a worrisome situation, as the September PMI surveys found employment contracting at its fastest pace since December 2009, the days of the Great Recession, with job losses in the service sector declining having hitherto been holding up while jobs in the construction and manufacturing sectors declined.

On the flipside, the monthly GDP data, showed that the UK expanded by 0.3% over July and August, strongly portending that growth over Q3 will be positive. So, while the Eurozone reading and the overall data out of the UK effectively signals stagnation, the monthly UK GDP keeps the wolf of recession at the door following the 0.2% contraction in Q2.

Despite this, the data should further facilitate a dovish-turn-in-progress at the BoE, especially now that it is clear that Brexit concerns are hitting the whole economy, even if a no-deal scenario can be avoided for now. The Institute for Fiscal Studies (IFS) meanwhile warned that even a “relatively benign” no-deal Brexit could push borrowing up to GBP 100 bln with total debt likely to jump to 90% of national income. IFS director Paul Johnson warned that the “government is now adrift without any effective fiscal anchor”.

Sterling dropped initially, in the wake of the data release, though follow through has been limited (currently at 1.2450) due to the optimism on Brexit and US-Sino trade talks but also on the GDP, which is suggesting that the economy is on course for a positive print for Q3, and will avoid technical recession. Overall, the currency continues to trade with about a 14-15% discount in trade-weighted terms compared to levels pre-vote in June 2016.

The UK government continues to position for “people-vs-parliament” election

On the Brexit front,UK Prime Minister Johnson met his Irish counterpart yesterday. UK PM Johnson and his Irish counterpart Varadkar, who said in a statement that they see a “pathway” to a possible compromise on the Irish border question, which could pave the way for a Brexit deal. At this point, clearly no-one should be carried away as it remains to be seen whether this was a show for the home audience to signal that both sides are still working hard on finding a deal, or whether there really is a breakthrough. Chief negotiators from both sides are meeting once again today and this really will be the last chance to find a way forward ahead of next week’s EU summit.

However, we have heard similar statements too often to believe in a last minute deal between the UK and the EU without confirmation that there is in fact an agreement. The political battles in Westminster meanwhile remain confusing for the outsider. The majority of MPs continue to oppose a no-deal Brexit scenario and have passed a law that requires Johnson to write a letter to the EU requesting a Brexit extension, if there is no deal.

Boris Johnson is reportedly is threatening to do everything to disrupt the working of the EU if the UK is forced to remain part of the bloc beyond October 31. EU officials don’t seem to think that he could do much harm as long as the UK is out by the summer of next year, when the next EU budget will have to be debated and the UK’s position must be clear in order to allow for accurate planning and prevent having to budget for projects in the UK that would risk overrunning the UK’s actual membership.

However, it is increasingly clear that the tactic of kicking things down the road is harming economies on both sides of the channel at a time when geopolitical trade tensions show no signs of abating and the global economy is facing a broad slowdown. For the EU then it seems increasingly clear that another extension will have to contain the promise of another referendum or an election in the UK, which would hopefully break the deadlock in Westminster, where parliament and government are no longer working together. The opposition could already call a confidence vote now, but is reluctant to trigger an election, before a no-deal Brexit on October 31 has been absolutely ruled out.

All this means a means a delay to January 31 is all but inevitable — assuming, that is, PM Johnson’s ongoing threat to leave without a deal on October 31 is a grand bluff aimed at amplifying his people vs parliament narrative ahead of an election later in the year. It would be politically risky for Johnson to actually try and force a no-deal exit through at the end of the month, as, aside from breaking the law, he would then go into a general election amid what even hardline Brexiteers must know would be a chaotic backdrop. The UK would have suddenly severed itself from over 750 separate agreements worldwide (according to FT research), requiring re-negotiation at not only the UK-EU level but also deal-by-deal authorisation of every third country involved, all at a time when UK imports get more expensive and UK exports more dear as the country shifts to backstop WTO trading terms. 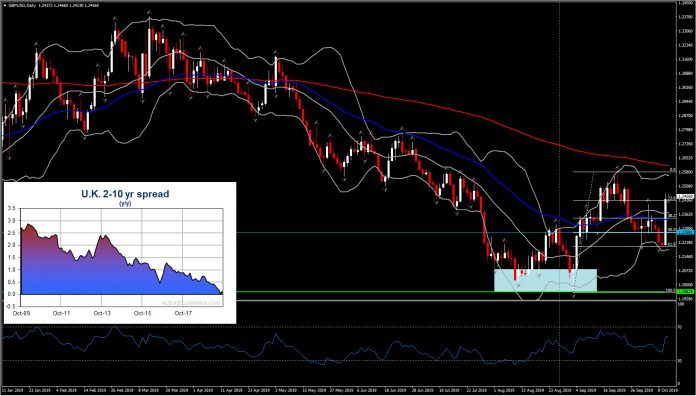