My view on the US Dollar remains very much bullish and with today's good rhetoric from both the US and Chinese delegations on trade talks this scenario becomes ever more likely.

After breaking above the 98.80 we've seen a retest of this level at least twice over the past week and today it got rejected again.

the next key historic level is the 99.80 around the 1.618% retracement of the last leg down which confluences with the previous highs and could be a BIG bulls target. In any case the make it or break it of this bullish structure is very dependent on how this trade talks will play out. If we get a deal between the 2 delegations a rally in the USD is expected. But if they fail to see common ground and this trade war escalates, a bearish move below the bullish structure to at least the previous lows is expected (98.00 level) 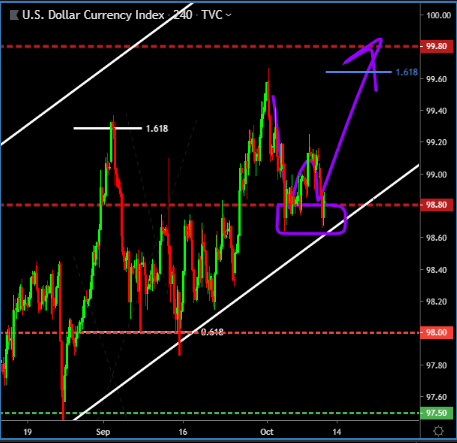 Tradimo is an online education community that seeks to educate people in the field of online financial trading. Tradimo is not a broker and does not process, manage or hold any user funds. Tradimo carries advertising for regulated online brokers. Advertisements are clearly marked as such on the Tradimo website and are kept separate from Tradimo's editorial content. Each broker is solely responsible for the content of their advertisements. Tradimo does not endorse or vouch for its advertising partners. Tradimo is fully independent and is not tied to, or otherwise engaged in, any form of corporate partnership or joint venture with any of its advertisers. Tradimo is not responsible for, and does not take an active role in, any contractual relationship which may come into being between its users and its advertisers. Any disputes between Tradimo users and its advertisers should be resolved directly by the parties concerned, Tradimo is unable to provide any form of support or assistance in such matters. Tradimo does not act as a financial advisor and will not recommend its users to trade or invest in specific assets, nor recommend the services of any particular broker.

Tradimo teaches specific trading strategies and concepts. Those strategies and concepts are taught for educational purposes only and are not intended as, and should not be deemed to amount to, financial advice. tradimo has taken all reasonable steps to ensure that its educational materials and services have been created to comply with its own high quality standards, however Tradimo does not provide any guarantee as to the suitability, quality, fitness for purpose and/or success of its educational materials or services when applied to real money trading or investing. If you choose to apply what you have learned at Tradimo to real money trading or investing, you do so at your sole discretion and at your own risk.